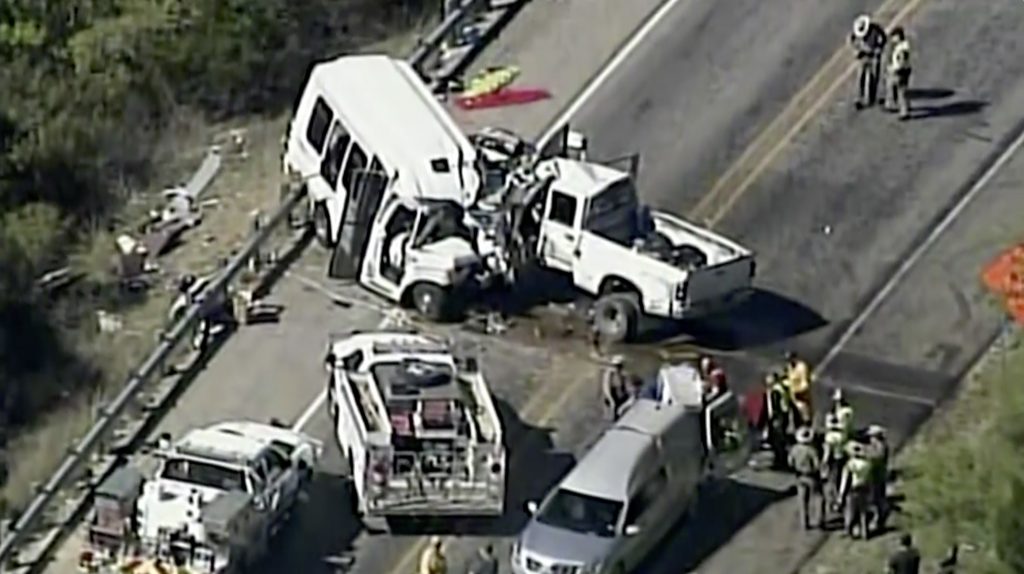 Federal officials on Thursday began an investigation into a head-on collision between a pickup truck and small church bus in southwest Texas that crumpled the front of the bus and killed 13 senior adults returning from a church retreat.

The Texas Department of Public Safety refused to speculate on the cause of the Wednesday afternoon crash outside Garner State Park, about 75 miles west of San Antonio, although one spokesman said the truck driver appeared to have crossed the center line.

The fronts of both vehicles were heavily damaged in the collision, and the bus was backed up onto a guardrail, with glass and debris scattered around.

“We are still grieving and we’re going to grieve for a while, and we will see what tomorrow looks like and then the next day,” Brad McLean, senior pastor of the First Baptist Church of New Braunfels, Texas, told reporters on Wednesday.

Ten of the people killed in the wreck were from New Braunfels, according to DPS, and they ranged in age from 61 to 87.

Authorities said the vehicles collided about 12:25 p.m. on U.S. 83 near the town of Concan. At a briefing near the crash site on Wednesday night, DPS Sgt. Orlando Moreno said the wreck occurred along a curve in the road where the speed limit is 65 mph.

“For reasons unknown, the truck veered into the southbound lane and struck the bus head-on,” Moreno said.

Hernandez was more circumspect early Thursday, saying only that the collision remains under investigation.

DPS Sgt. Conrad Hein said the small bus was a 2004 Turtle Top, though he did not know the specific model. Turtle Top’s website features shuttle buses with capacities ranging from 17 to 51 passengers, which they bill as “a great alternative to the standard 15-passenger van.” Safety concerns have long surrounded the 15-passenger vans, which are frequently used by churches and other groups, with advocates saying they can be difficult to control in an emergency.

The San Antonio-area church said on its website that the members were returning from a three-day retreat at the Alto Frio Baptist Encampment in Leakey, about 9 miles (15 kilometers) from the crash site.

Church officials were “ministering to family members to help them deal with this tragedy” and counselors will be available Thursday at the church, according to the statement.

“We are saddened by the loss of life, and our hearts go out to all those affected,” their statement said. “We thank the first responders working on the scene in the wake of this unimaginable tragedy, and ask that all Texans join us in offering their thoughts and prayers.”