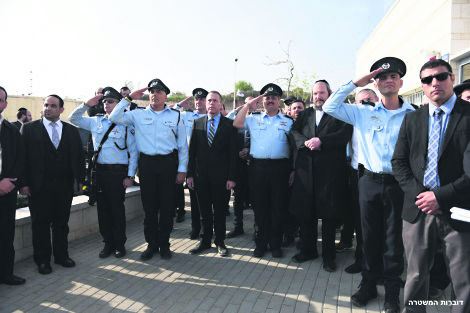 Beitar Illit inaugurated its first police station, the first in a chareidi city.

The station will serve the 90,000 residents of Beitar, the Gush Etzion Regional Council and Efrat.

Police commanders said the presence of the new station will mean improved patrols and service to the community in general and Beitar in particular.

Alsheich said that putting the regional station inside a chareidi city was another sign of the importance the police place on improving and strengthening relations with the chareidi public.

“There are four community police officers working in the area of Beitar Illit and the community, who are leading meaningful projects in order to strengthen ties with the community,” he said.
“I have no doubt that this milestone in the opening of the Beitar Illit station will lead to an improvement in the quality of life of the residents of the area, and to strengthening the residents’ confidence in the police.”

Erdan said, “Since the beginning of my tenure, I have been working to expand police activity, with emphasis on the sectors that were not receiving proper police services, one being the chareidi public.”