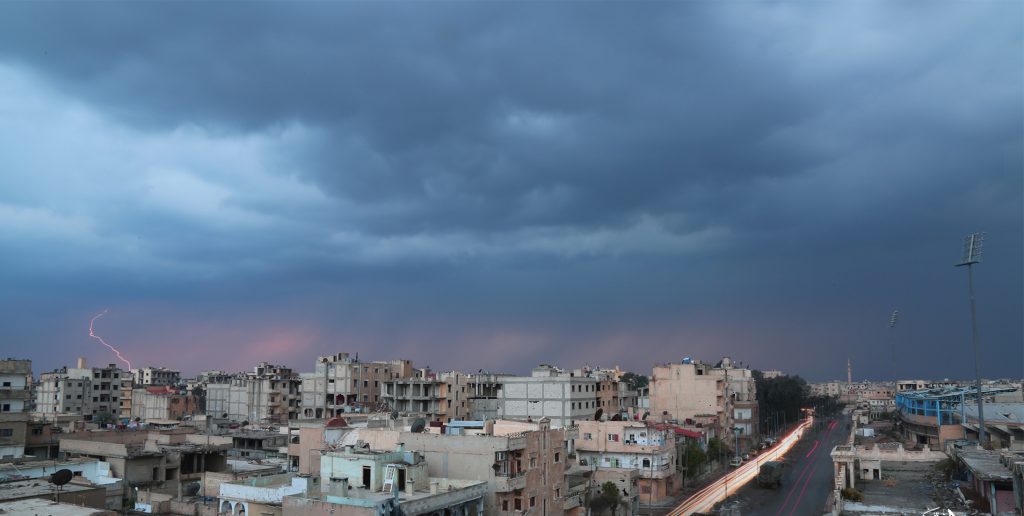 Residents of the northern Syrian city of Raqqa live in terror, trapped as a massive human shield in the Islamic State’s de facto capital ahead of the final battle with U.S.–backed opposition forces for the militant group’s last major urban stronghold.

A belt of land mines and militant checkpoints circle the city. Inside, all the men have been ordered to wear the jihadis’ garb of baggy pants and long shirts — making it difficult to distinguish Islamic State militants from civilians.

Hundreds if not thousands of Syrians who fled from other parts of the country now live in tents in Raqqa’s streets, vulnerable to both warplanes and ground fighting. Enormous tarps have been stretched for blocks in the city center to hide the militants’ movements from spy planes and satellites.

The estimated 300,000 people trapped inside live in terrifying uncertainty over how to find safety. Airstrikes by the U.S.–led coalition shake the city almost daily, mainly hitting northern neighborhoods, amid reports of civilians killed by strikes in the nearby countryside.

Leaflets dropped by coalition warplanes give confusing directions: One suggests that areas closer to the Euphrates River are safer, but then another warns that boats crossing the river will be struck.

Mass panic erupted on Sunday, when IS announced on mosque loudspeakers that U.S. strikes had hit a dam to the west of Raqqa. Residents were urged to flee imminent flooding, and thousands did. The militants allowed them into IS-controlled countryside nearby, as long as they left their possessions behind, according to an activist who is in touch with people inside the city. Hours later, the militants announced that it was a false alarm and urged everyone to return.

“The people really don’t know where to go,” said the activist, saying residents were caught between airstrikes, land mines and IS fighters mingling among civilians.

To get a picture of Raqqa, The Associated Press talked to more than a dozen people with knowledge of the city, including residents who were still there or who had recently escaped; and activists with organizations that track events through contacts inside, as well as diplomats, the U.S. military and aid groups. Almost all spoke on condition they not be identified, fearing for their own lives or the lives of their contacts.

Getting information is difficult. Militants constantly look for “spies.” One activist said two people had recently been put to death for suspected contact with the coalition. The only internet access is in a few approved cafes where patrons must give their names and addresses and endure spot checks by IS fighters, who burst in and order everyone to raise their hands so computer screens can be inspected.

Raqqa, a provincial capital on the northern bank of the Euphrates, is the next major battle against the Islamic State group as Iraqi forces push to complete the recapture of northern Iraqi city of Mosul after nearly six months of fighting. For the Raqqa campaign, a multi-ethnic force of Syrian fighters — dominated by Kurds and supported by U.S. special forces, artillery and air power — have been maneuvering to isolate the city.

Concerns over civilian casualties have become a significant issue in the fight for Mosul. Amnesty International said on Tuesday that a significant spike in civilian casualties suggests the coalition is not taking enough precautions in its airstrikes. The U.S. has said it is investigating the deaths, but American and Iraqi officials also suggested the militants blew up homes and blamed the coalition.

The Islamic State has sent most of its European fighters out of Raqqa farther east to the region of Deir el-Zour, deeper into its shrinking territory, according to Tim Ramadan, an activist with the group Sound and Picture, who remains in Raqqa; and Eyas Dass, editor of Al Raqqa Post, an opposition website that documents atrocities by IS and the Syrian government.

That is probably a sign it wants to protect the foreigners, either for a propaganda campaign or to send them to carry out attacks in their home countries, they said. Both spoke on condition they be identified by the aliases they always use in their activities to protect themselves and families.

Battle-hardened Syrians and Iraqis are leading the defense in Raqqa, bolstered by reinforcements from those who withdrew from Mosul and other parts of Iraq. Dass said about 2,000 fighters and their families are en route from Iraq, and Ramadan said many are already in Raqqa. Rami Abdurrahman, head of the Syrian Observatory for Human Rights, estimated over 4,000 fighters in the city.

Earlier this month, the terrorists used their artillery in the city for the first time, a sign of how close the Kurdish-led Syrian Democratic Forces have come. The SDF has positions to the north, west and east — their closest position is about 5 miles from Raqqa to the northeast.

Coalition aircraft have taken out 18 bridges, including the main ones out of the city across the Euphrates, according to the coalition. Airstrikes have also focused on the former base of the Syrian military’s 17th Division, north of the city, now a major IS base. Most of its buildings have been destroyed, activists say.

For days, dollar-bill-sized leaflets have fluttered from coalition planes to warn of impending strikes. More than 2 million have been dropped in two weeks, the coalition said.

One urged those living in tents to move closer to the Euphrates, according to a resident and the U.S. military in Baghdad. Another warned residents not to board the small boats that are the only way to cross the river, whether for daily errands or to flee Raqqa.

“Daesh is using boats and ferries to transport weapons and fighters. Do not use ferries or boats; airstrikes are coming,” the flyer said, using an Arabic acronym for the group.

Getting smuggled out is too expensive for most. Smugglers — most often IS fighters looking to make a profit — charge $300 to $500 a person and sometimes as high as $1,000 to get out of the city, according to several activists and a Western aid worker familiar with the situation. The aid worker also declined to be identified for fear of jeopardizing his group’s work and safety.

Once outside, they face the danger of the land mines. The aid worker said one man who staggered into a camp for the displaced had lost a child from a roadside bomb and was himself gravely injured.

Those who make it to SDF-controlled areas risk being turned back unless they have someone vouch for them, according to Muhab Nasser, an activist from Raqqa province. He said some had been refused entry by SDF fighters, suspicious of IS infiltrators or sympathizers.

The cost of being smuggled out of Syria entirely is a prohibitive $3,000 to $4,000 a person, according to Sarmad al-Jilane, a Sound and Picture activist in Turkey. Turkey also is cracking down on crossings.

As a result, few from Raqqa are found in southern Turkey, where hundreds of thousands of Syrians have fled the civil war. The aid worker also said so far there is no refugee crisis from Raqqa — a chilling sign of how hard it is to leave.

Fighters in Raqqa have started to move in with families to hide among civilians. Residents must dig trenches, stack sandbags and build earthen berms for the city’s defenses. Children have stopped going to school.

“If you want ‘lessons,’ you go to the mosques,” said Hamad, a former resident of Raqqa province who keeps in regular contact with people in the city. He spoke from Beirut on condition he be identified only by his first name for fear of reprisals against relatives and friends there.

Food is still in adequate supply, though prices rose after the destruction of the bridges. Medical care is almost nonexistent since most doctors fled long ago, according to Hamad and others. Hospitals are short on equipment.

But underground clinics run by the Islamic State group for its fighters are well-stocked, said Hussam Eesa, one of the founders of the activist group Raqqa is Being Slaughtered Silently, speaking from Turkey.

Loudspeakers on mosques or on vehicles used by the religious police warn the populace that the battle is coming.

“They tell people … it is a battle against Islam; all nations are attacking us, and the [Mohammad] says we should be united,” Eesa said. “They are putting psychological pressure on residents.”