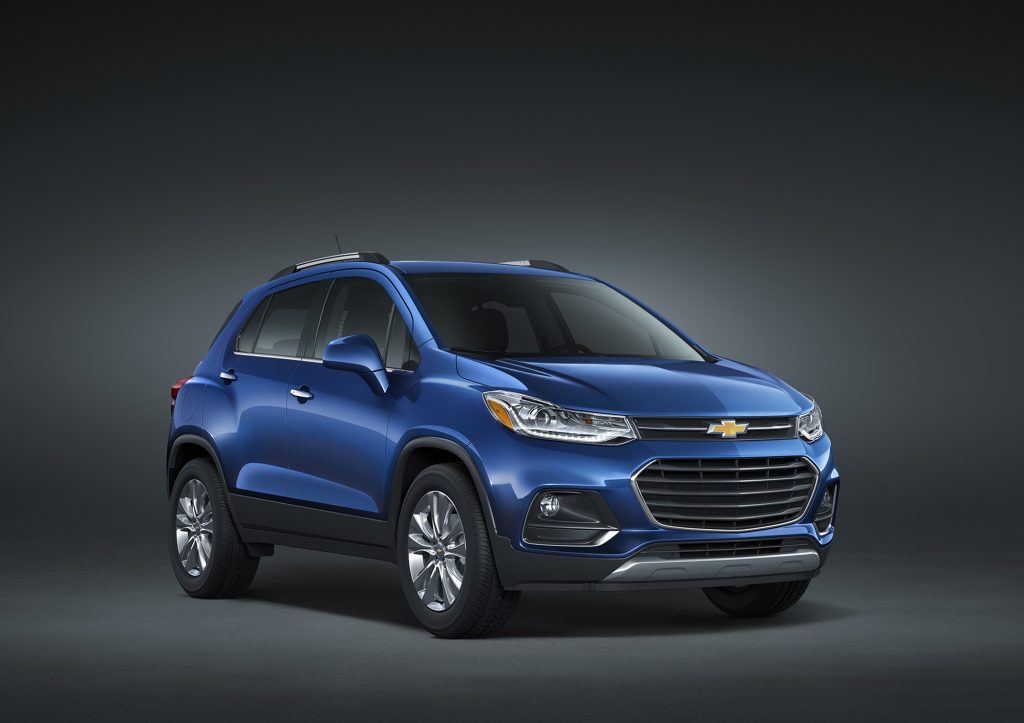 Chevrolet has given its popular Trax a more contemporary look, a new instrument panel and more safety features for 2017; and the early reviews are good, as it continues to set U.S. sales records in the fast-growing small SUV market.

The five-seat Trax registered its best January and February this year, and the sales gains followed record U.S. sales of 79,016 for 2016.

The 14-foot-long Trax is Chevrolet’s smallest and most fuel-efficient SUV, with federal government fuel economy ratings of up to 25 mpg in city driving and 33 mpg on highways for a two-wheel drive model.

It is also Chevy’s lowest-priced SUV, with a starting manufacturer’s suggested retail price of $21,895 for a base 2017 Trax LS with automatic transmission and two-wheel drive. That includes the destination charge, and it is $700 more than last year’s base model.

The Trax also has a few features not usually found on other small SUVs, such as 4G LTE connectivity with Wi-Fi hotspot.

It comes with 10 air bags, including rear-seat side thorax bags and front-seat knee air bags. That is more than any other 2017 small SUV, including the premium BMW X1.

The Trax also earned five out of five stars in the federal government’s overall safety rating after frontal and side crash tests. Consumer Reports magazine predicts that the 2017 Trax will have much better than average reliability.

The Trax’s solitary engine — a 1.4-liter, double overhead cam, turbocharged four-cylinder — is unchanged. Its peak torque is 148 foot-pounds at 1,850 rpm, and it generates 138 horsepower. During a test drive of a front-wheel drive Trax, the SUV sometimes struggled to respond to flat out, hard acceleration on highways and could sound buzzy going uphill.

The only transmission is a six-speed automatic that managed power mostly smoothly. But the test-driven model averaged only 23.7 mpg in city and highway travel, rather than the 28 mpg estimated by the federal government.

For 2017, Chevrolet smoothed the front end by eliminating the heavy-looking bar across the grille. Now, the Trax has Chevy’s new dual-port grille that pushes the larger grille opening down low for a more attractive look.

Inside, the big upgrade is what’s in the dashboard — new instrument panel gauges and a new 7-inch driver information center.

Many drivers likely will notice that the red needles in the tachometer and speedometer point straight down to the floor when at zero, which is different from many other vehicles.

The test-driven Trax was a top-of-the-line Premier model with a rich-looking black and brandy-colored leatherette on the seats. This combination made the Trax look more expensive than its $27,290 window sticker. But the lack of a covered center console between the front seats and no middle head restraint in the back seats were noticeable.

The Trax doesn’t have the most refined suspension, but it’s still an easy-to-drive vehicle whose smaller dimensions make it nimble and easy to park.

Passengers sit up a bit from the pavement to be able to see above or through cars and other SUVs in front.

Trax models from the 2017 model year were among 3.6 million General Motors Co. vehicles recalled last September because front air bags or seat belt pretensioners might not deploy during a crash.