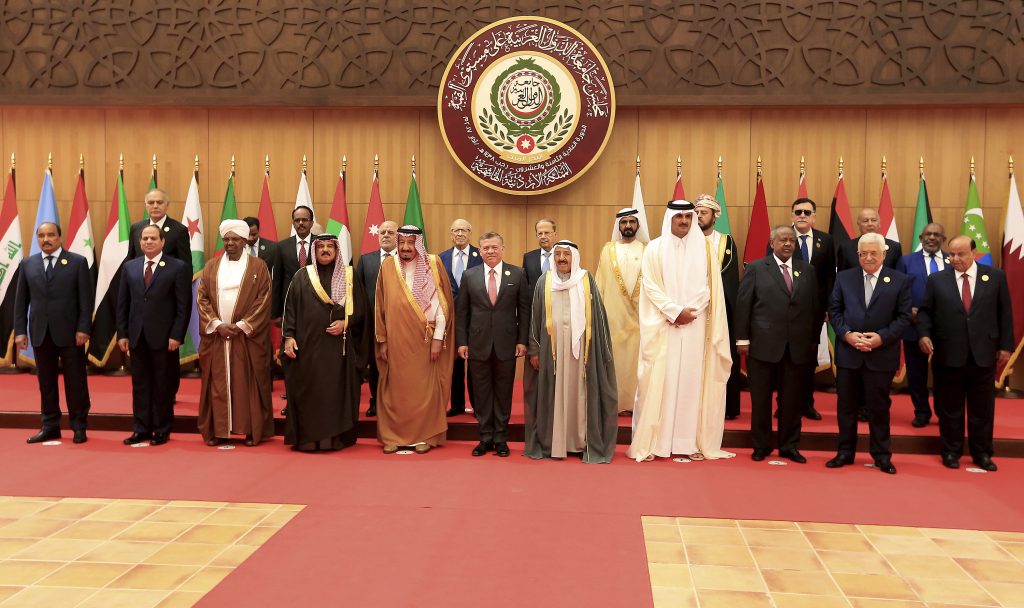 Arab leaders on Wednesday relaunched a peace plan that offers Israel full ties in exchange for Palestinian statehood, signaling to President Donald Trump that they are ready to engage if he tries to broker a broader Mideast peace.

The initiative was formulated at a one-day Arab League summit held in Jordan, that Jordanian officials said sent a “message of peace.”

The gathering came ahead of White House meetings in the coming weeks between Trump and three Arab leaders – Jordan’s King Abdullah II, Egyptian President Abdel-Fattah el-Sissi and Palestinian Authority President Mahmoud Abbas. The trio met on the sidelines of the summit to consolidate positions ahead of the White House meetings, officials said.

President Trump hasn’t yet formulated a policy on the Israeli-Palestinian conflict, but has said he is eager to broker a deal. His initial comments, including a campaign promise to move the U.S. Embassy in Israel to Yerushalayim and suggestions that there are alternatives to a two-state solution, has caused alarm among some Arab leaders.

However, an embassy move no longer appears imminent, and some Trump administration officials have since endorsed the two-state solution.

Trump’s international envoy, Jason Greenblatt, attended the summit and held talks with Abbas and the foreign ministers of Jordan, Egypt and Qatar.

Greenblatt affirmed Trump’s belief that an Israeli-Palestinian deal “is not only possible, but would reverberate positively throughout the region and the world,” according to a statement released by the U.S. embassy in Jordan. In his capacity as an observer, Greenblatt “did not endorse the speeches given or resolutions approved by the assembled Arab League member states.” Rather, he was there mainly to listen to their views, much as he had during a visit to Ramallah two weeks ago.

“Greenblatt made clear that he was not in the region to impose ideas or peace plans on others,” the statement said. The meetings were described as “open, frank, and helpful.”

“It’s a priority for both of us,” he said in a joint tweet with Mogherini.

In reaffirming the 2002 Arab Peace Initiative, Wednesday’s summit undercut Israel’s proposal of a regional peace in which normalization with some Arab countries would precede a deal with the Palestinians. Abbas has vehemently opposed this idea, fearing it would further weaken Palestinian negotiating positions.

Israeli Prime Minister Benjamin Netanyahu has said he is willing to negotiate the terms of Palestinian statehood, but rejects a partition of Yerushalayim and settlements have expanded during his premiership.

Netanyahu has not formally abandoned his stated support for the two-state solution, but has stopped mentioning it in his speeches since Trump was elected. Instead, he has made vague statements about seeking a region-wide peace agreement.

Israeli Cabinet minister Israel Katz suggested after the summit ended that Israel is ready to cooperate with Arab states, including in countering shared security threats, while “also advancing initiatives to improve the conditions of the Palestinians.”

Katz said that a positive change in the regional climate “could lead in the future to peace.”

Katz made no reference to the Arab peace plan, which was first launched in 2002. In the past, Israel has balked at the plan’s proposed scope of withdrawals and its call for a “just settlement” of the Palestinian refugee problem.

Jordanian Foreign Minister Ayman Safadi said the summit signaled the Arab world is willing to engage with the Trump administration in efforts to negotiate a two-state deal. He said the Israeli-Palestinian conflict remains a root cause of Mideast tensions, and that resolving it would boost the fight against terrorism.

The summit’s closing statement said “peace is a strategic option” for Arab states.

The declaration also highlighted the importance of Jerusalem to the Arab world.

The statement urged countries around the world not to move their diplomatic missions in Israel to Jerusalem – another signal to Trump.

The summit affirmed long-held positions of Jordan, which has a large Palestinian population and also serves as custodian of the Al Aqsa compound on the Har Habayis.

The consensus on the Palestinian issue also served as a showcase for Arab unity in a fractured region, where leaders find themselves on opposite sides of long-running conflicts, particularly Syria’s six-year-old civil war.

The 21 kings, presidents and top officials gathered on the Jordanian side of the Dead Sea, had a clear view from the summit’s venue to the West Bank on the opposite shore.

Syrian President Bashar Assad was absent – he hasn’t been invited since Syria’s suspension from the 22-member Arab League following his crackdown on a 2011 uprising that quickly turned into a brutal civil war.

Meanwhile, there were signs that Egypt and Saudi Arabia were making progress toward easing tensions that have been simmering for months.

Saudi Arabia is a leading supporter of the Syrian opposition, while Egypt, fearful of Islamic militants among the rebels’ ranks, has pushed for a political solution that might keep Assad in power.