The rally was broad, with materials and industrial companies among the biggest gainers. Energy stocks notched a big gain as crude oil prices moved higher.

The market got a boost from new data showing that consumer confidence in the U.S. hit its highest level since 2000.

“The consumer confidence number was really good, but more importantly, it seems like both sides of the aisle do want to get something done around tax reform,” Mr. Kinahan said. “That’s all the market is really hanging its hat on.”

Since Donald Trump’s presidential election win last November, investors have been optimistic that the administration would deliver on promises to slash taxes, loosen regulations for companies and institute other business-friendly policies. Republicans’ failure to repeal the Affordable Care Act last week dashed some of that optimism, pulling down stocks. But this week, Republicans appear to be shifting their focus back on tax cuts, among other issues.

Trading got off to a downbeat start Tuesday as investors weighed the latest batch of company earnings news. But the market livened up around midmorning when the Conference Board said its consumer confidence index rose this month to its highest level in more than 16 years. The index measures both consumers’ assessment of current conditions and their expectations for the future. Both improved this month.

Traders also got some encouragement from the latest Standard & Poor’s CoreLogic Case-Shiller home price index, which showed that U.S. home prices rose at the fastest pace in more than two years in January.

Mortgage rates are rising, but that’s not expected to affect home sales yet because hiring is still strong, rates are low and there aren’t a lot of homes on the market. That’s a positive combination for homebuilders, many of which have seen their stocks move sharply higher this year. Beazer Homes USA notched the biggest gain among builders Tuesday, gaining 38 cents, or 3.3 percent, to $12.06. The stock remains down 9.3 percent this year. 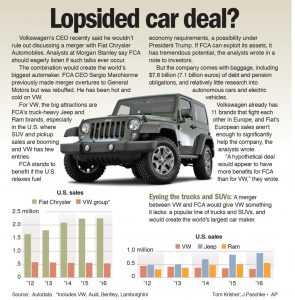 Darden Restaurants jumped 9.3 percent after the owner of Olive Garden reported strong quarterly results and said it will buy the Cheddar’s Scratch Kitchen chain for $780 million. Cheddar has 165 locations in 28 states. Darden was the biggest gainer in the S&P 500, rising $7.04 to $82.62.

Red Hat climbed 5.2 percent after the open-source software company reported strong sales and solid guidance for the current quarter. The stock rose $4.28 to $86.48.

Carnival rose 0.7 percent after the cruise line operator served up solid first-quarter results and a better-than-expected estimate for the second quarter. The stock, which closed at an all-time high on Monday, gained another 39 cents to $59.26.

General Motors rose 2.4 percent after its board voted to reject a proposal from investor David Einhorn to split the automaker’s stock into two classes. GM shares picked up 85 cents to $35.56.

In Europe, Germany’s DAX gained 1.3 percent, while France’s CAC 40 rose 0.6 percent. The FTSE 100 index of leading British shares added 0.7 percent. Investors, particularly in U.K.-related assets, will have more to chew on Wednesday when the British government finally triggers the two-year process by which it leaves the European Union.