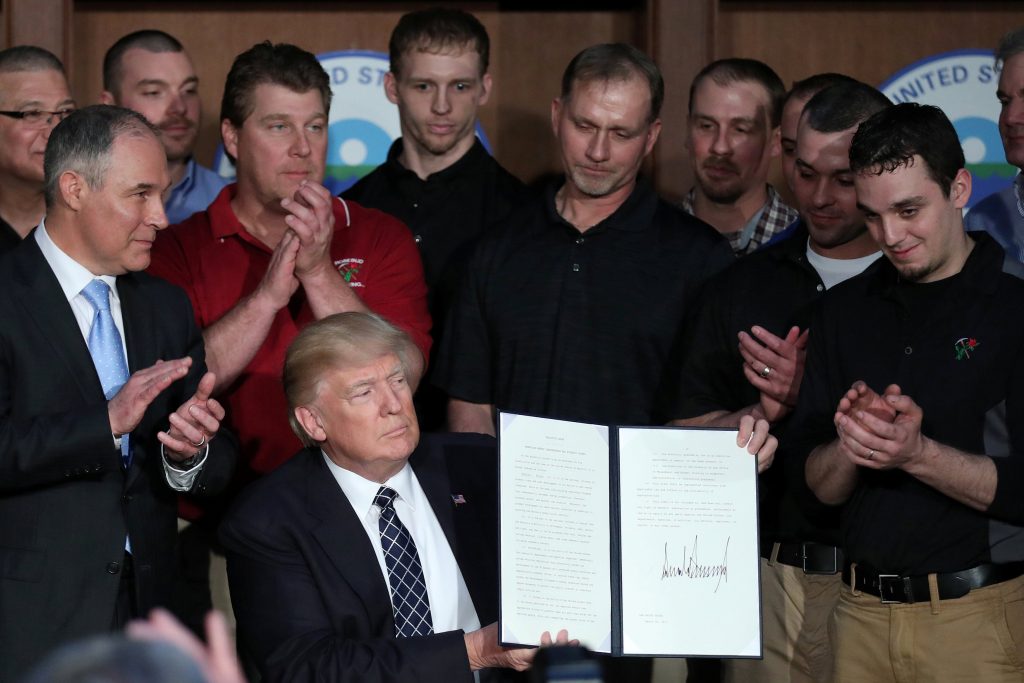 President Donald Trump on Tuesday ordered the federal government to undo the climate regulations enacted by former President Barack Obama, issuing a directive aimed at dismantling the policies that have made the U.S. a global leader in curbing greenhouse-gas emissions, but which critics have argued has killed jobs and increased energy costs.

The plan unveiled by Trump reflects an about-face for the U.S. on energy, and it puts into jeopardy the nation’s ability to meet the obligations it agreed to under the global-warming pact signed in Paris with 194 other nations. It would shelve the landmark Clean Power Plan that mandates electricity companies reduce their emissions. It seeks to dislodge consideration of climate throughout the federal government, where it has been a factor in every relevant decision in recent years.

“My administration is putting an end to the war on coal,” Trump said. “I am taking historic steps to lift the restrictions on American energy to reverse government intrusions and to cancel job-killing regulations.”

Under the order, the government will abandon the “social cost of carbon” that regulators had painstakingly calculated and begun factoring into their decision on permit applications and rulemaking. Restrictions on methane releases at oil- and gas-drilling facilities would be eased.

Agencies will also stop contemplating climate impacts as they launch into new projects, and restrictions on coal leasing and fracking on federal lands will be lifted.

The directive, for which progressive states and environmentalists have been preparing for months, is certain to set off years of litigation and conflicts between Washington and state capitols.

Some of the most far-reaching policies Trump is seeking to bring to a halt cannot be canceled unilaterally and require lengthy administrative proceedings. But others he can end with the stroke of his pen.