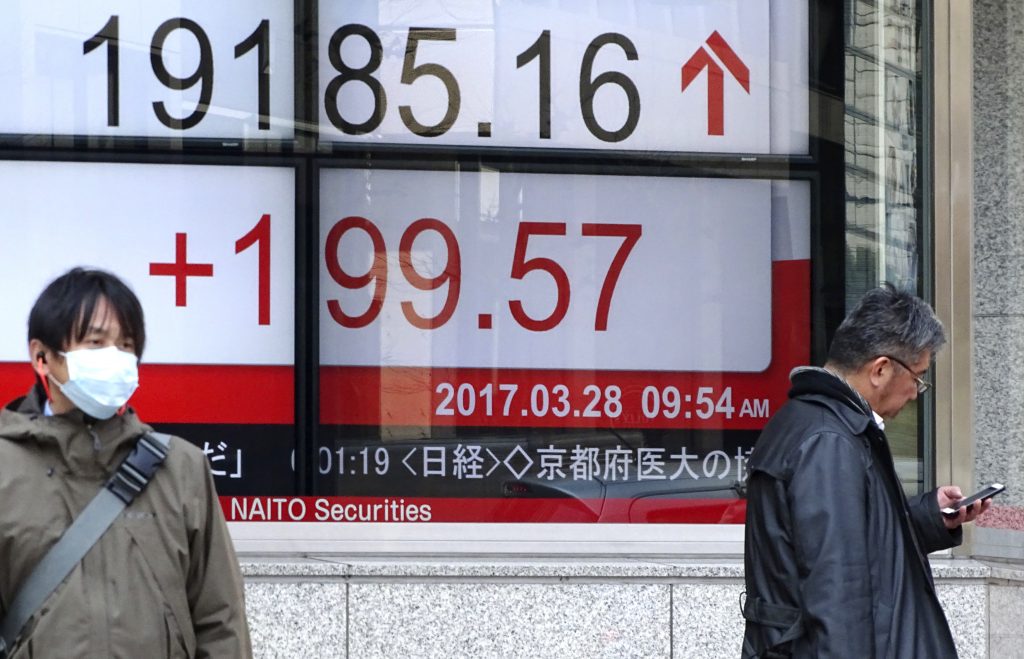 Asian stocks advanced on Tuesday after Wall Street stabilized and the dollar was steady, as anxiety over President Donald Trump’s setback on health-care reform gave way to tentative hopes for the president’s planned stimulus policies.

European markets were also set for a stronger start, with financial spreadbetters expecting Britain’s FTSE 100 and France’s CAC 40 both to open 0.3 percent higher and Germany’s DAX to start the day up 0.4 percent.

South Korean stocks climbed 0.4 percent after data showed the domestic economy grew at a slightly faster pace than initially thought in the fourth quarter of 2016, supported by strong construction activity.

Hong Kong’s main Hang Seng added 0.5 percent. China’s market was one of the region’s underperformers amid concerns about tightening liquidity conditions after the central bank refrained from injecting short-terms funds into the banking system for the third session in a row.

The CSI 300 index was about 0.2 percent lower and the Shanghai Composite was down 0.4 percent

Overnight, the S&P 500 and the Dow Jones Industrial Average closed lower but narrowed their losses from earlier in the session, when both hit near-six-week lows. The Nasdaq ended higher.

Stock markets, which went on a tear after President Trump’s election win, got an added lift from the Federal Reserve’s less-hawkish-than-expected stance in mid-March. But doubts about President Trump’s ability to keep his promises of fiscal stimulus, including tax reform, halted the rally.

While that blow stoked concerns about the president’s ability to enact stimulus policies, these began to recede overnight as investors looked with renewed, albeit tentative, optimism to the U.S. government’s next policy steps.

“Markets appear reluctant to take the Trump disappointment too much further at this stage,” Ric Spooner, chief market analyst at CMC Markets in Sydney, wrote. “With U.S. economic growth showing signs of improvement and the [Fed] clearly embarked on a monetary tightening cycle, the significant correction that has already occurred in bonds and the U.S. dollar may already reflect an adequate wind-back of the market’s Trump exuberance.”

Tim Condon, economist at ING Financial Markets, said in the Reuters Global Market Forum chatroom that he “would not anticipate any more Democrat support for Republicans’ tax reform than for ObamaCare reform.”

But “the good news for investors is that the global economy is picking up,” Condon said. “I view the current selling as a buying opportunity.”

The dollar was little changed at 110.63 yen after recovering from its lowest level since November on Monday.

The dollar index inched up to 99.226 after slumping to a 4½-month low on Monday.

The euro was steady at $1.0861 on Tuesday, after touching its highest point since November on Monday.

Sterling was flat at $1.2554, with Prime Minister Theresa May due to formally notify the EU of Britain’s intention to leave the club on Wednesday. It hit a seven-week high on Monday.

In commodities, the return of risk appetite and the dollar’s relative weakness helped lift oil from a level close to the 3½-month low seen last week, but gains were capped by lingering concerns about whether OPEC-led output cuts can offset surging U.S. production.

Gold was flat at $1,253.83 an ounce on Tuesday, after pulling back from the one-month high touched on Monday.