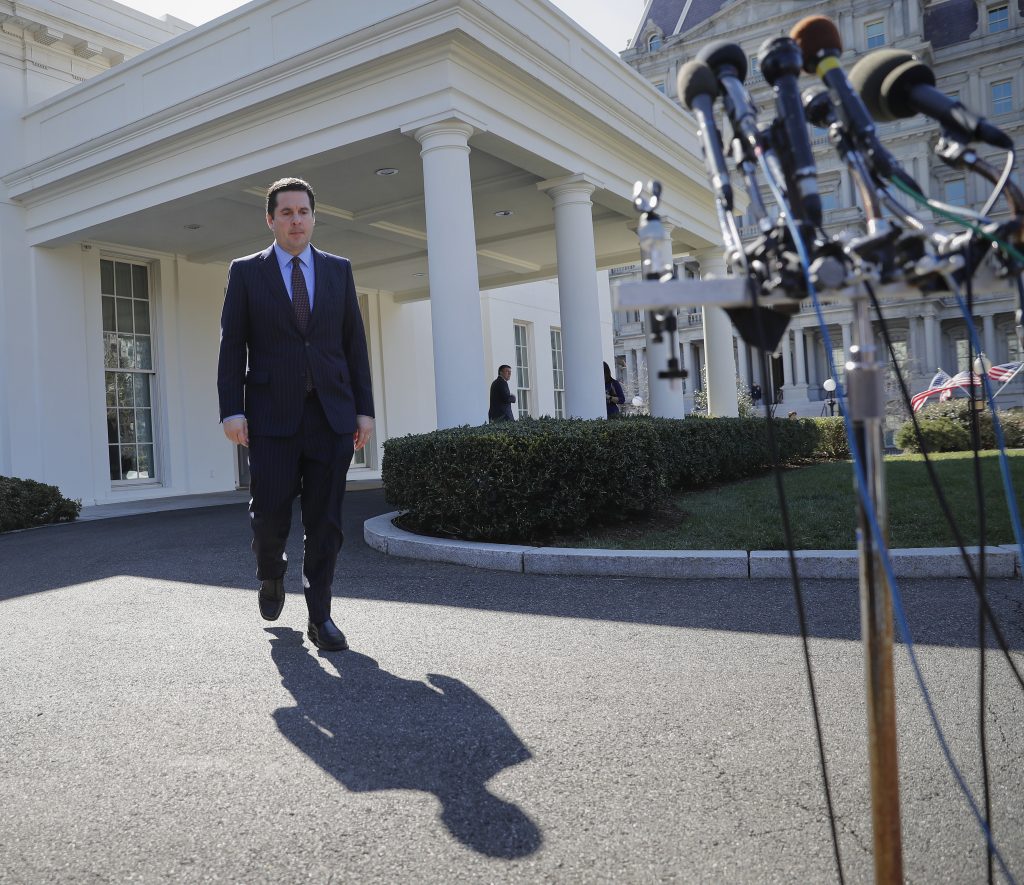 House intelligence chairman Devin Nunes faced growing calls Tuesday to step away from the panel’s Russia investigation as revelations about a secret source meeting on White House grounds raised questions about his and the panel’s independence.

Nunes acknowledged Monday that he reviewed intelligence reports at the White House complex and met a secret source behind his statement that communications involving associates of President Donald Trump were caught up in “incidental” surveillance.

Schiff said Nunes’ connections to the White House have raised insurmountable public doubts about whether the committee can credibly investigate the president’s campaign associates.

“I believe the public cannot have the necessary confidence that matters involving the president’s campaign or transition team can be objectively investigated or overseen by the chairman,” Schiff said in a statement Monday.

After reviewing the information last week, Nunes called a news conference to announce that U.S. spy agencies may have inadvertently captured President Trump and his associates in the routine targeting of foreigners’ communications. Trump quickly seized on the statements as at least partial vindication for his assertion that President Barack Obama tapped his phones at Trump Tower — though Nunes, Schiff and FBI Director James Comey have said there is no such evidence.

Nunes has denied coordinating with the president or his aides.

But Rep. Jackie Speier, D-Calif., a member of the committee, said Tuesday that Nunes should step down “in the interest of our integrity.” She said his actions raise questions about whether the panel’s investigation can be unbiased and independent.

“If you become a White House whisperer, you are not independent,” she said on CNN.

The Senate intelligence committee is also conducting an investigation into Russia’s interference in the election and possible ties with the Trump campaign. On Monday, it announced that President Trump’s son-in-law, Jared Kushner, has agreed to be interviewed. The White House confirmed that Kushner, a senior Trump adviser, had volunteered to be interviewed about arranging meetings with the Russian ambassador and other officials.

Meanwhile, a Russian state bank says it has met with Kushner as part of a series of meetings on future business strategies.

Vnesheconombank, or VEB, said in Monday’s statement carried by state RIA Novosti news agency that it met with Kushner last year as part of ‘road show’ discussions with representatives of leading financial institutions in Europe, Asia and the United States. It said the meetings focused on global development banks’ strategies. VEB provided no further details.

President Trump suggested late Monday that the House panel should investigate Bill and Hillary Clinton’s dealings with Russia. “Trump Russia story is a hoax,” he tweeted.

Besides the two congressional committees, the FBI is also investigating connections between the Trump campaign and Russia.

The House investigation has been hampered by partisan divisions.

The chairman did not tell the top Democrat on the committee about the meeting at the White House complex. It is highly unusual for a committee chairman and ranking member not to coordinate meetings related to an investigation.

Nunes argues he had to review classified, executive branch documents from a secure facility at the White House because the reports had not been provided to Congress and could not be transported to the secure facilities used by the House intelligence committee. Nunes would not name the source of the information, nor would he disclose who invited him onto the White House grounds for the meeting. He described the source as an intelligence official, not a White House official. In an interview on CNN, he suggested the president’s aides were unaware of the meeting.

House Democratic Leader Nancy Pelosi said, “Chairman Nunes’s discredited behavior has tarnished that office,” and said Ryan should insist that Nunes “at least recuse himself” from the Russia probe.

AshLee Strong, a spokeswoman for Ryan, said Monday the speaker has “full confidence that Chairman Nunes is conducting a thorough, fair and credible investigation.”

When Nunes disclosed the intelligence reports last week, he said what he reviewed had nothing to do with Russia, which could suggest that Trump associates were in touch with other foreign targets of U.S. intelligence surveillance in November, December or January.