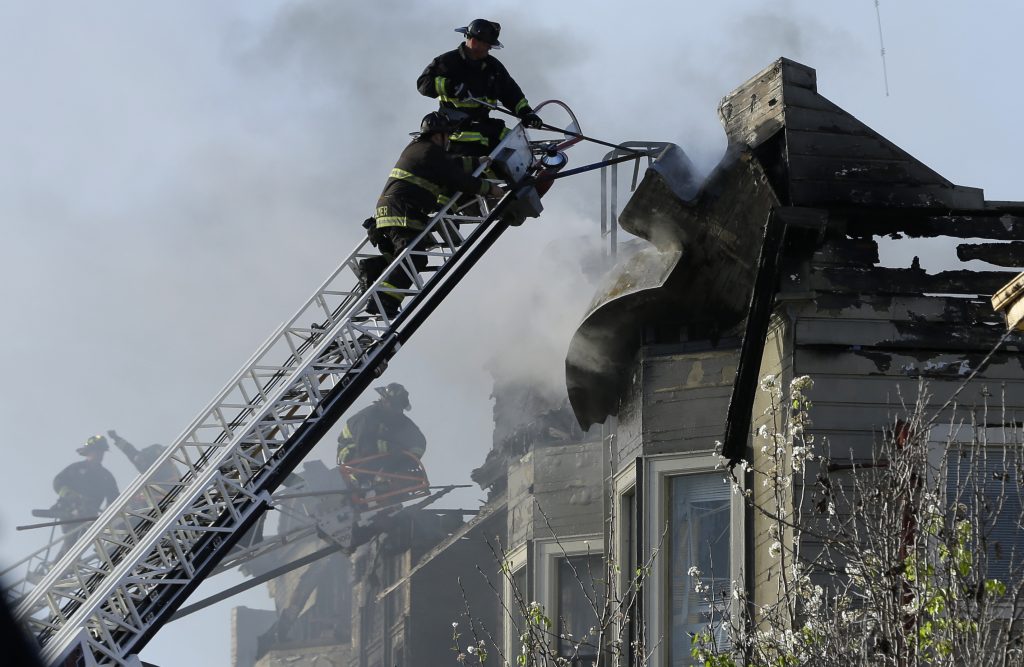 During a Friday inspection, officials found the building lacked fire extinguishers, smoke detectors in every apartment and a working sprinkler system, among other violations, documents released by the city of Oakland show. Inspectors ordered the owner to immediately service the fire alarm and fire sprinkler systems.

In Monday’s predawn darkness, resident Michael Jones said he was awakened by screams of “fire,” bolted out of bed and instinctively pounded on the doors of his elderly neighbors and ushered them to safety — walkers and all.

A few hours later, he stood across the street, staring at the smoldering wooden structure that housed some 80 recovering addicts and former homeless people, many of whom complained that they had not heard alarms, felt sprinklers or found fire extinguishers as they fled the substandard living conditions.

The owner, Keith Kim, did not return telephone calls from The Associated Press.

The blaze gutted the building and killed three people and injured four others. One resident remained missing Monday.

Oakland Fire Battalion Chief Erik Logan said some people were hanging from windows and others were in fire escapes when firefighters arrived.

The fire broke out in the rundown neighborhood nearly three months after a warehouse called the Ghost Ship caught fire and killed 36 people attending an unlicensed concert about five miles away.

The fires have raised questions about the use of some buildings in the city for residences amid a shortage of affordable housing in the San Francisco Bay Area.

The Building Department also has an open investigation into complaints of “no working heat throughout the building, electrical issues and a large pest infestation,” city records show.

City fire officials have been criticized for failing to inspect the Ghost Ship warehouse and the mayor conceded that city agencies need to improve communication after records showed police responding to a number of complaints there in the months before the Dec. 2 blaze.

The cause of the Ghost Ship fire is still under investigation and Fire Chief Teresa Deloach Reed announced she would retire May 2.

Days after the warehouse fire, the owner of the building that burned Monday sent an eviction notice to Urojas Community Center, which had leased the first two floors of the three-story building, said James Cook, an attorney for the center.

The center assists about 60 people with transitional housing and services, Cook said. He had complained to the city about clogged toilets and disgusting bathrooms, exposed wires and water an inch deep on the ground floor, he said.

Residents said the hallways were cluttered with trash and debris.

“There were no sprinklers or fire extinguishers,” said Curtis Robinson, 52, who had to leave his wheelchair behind in his first-floor room in the scramble to escape.