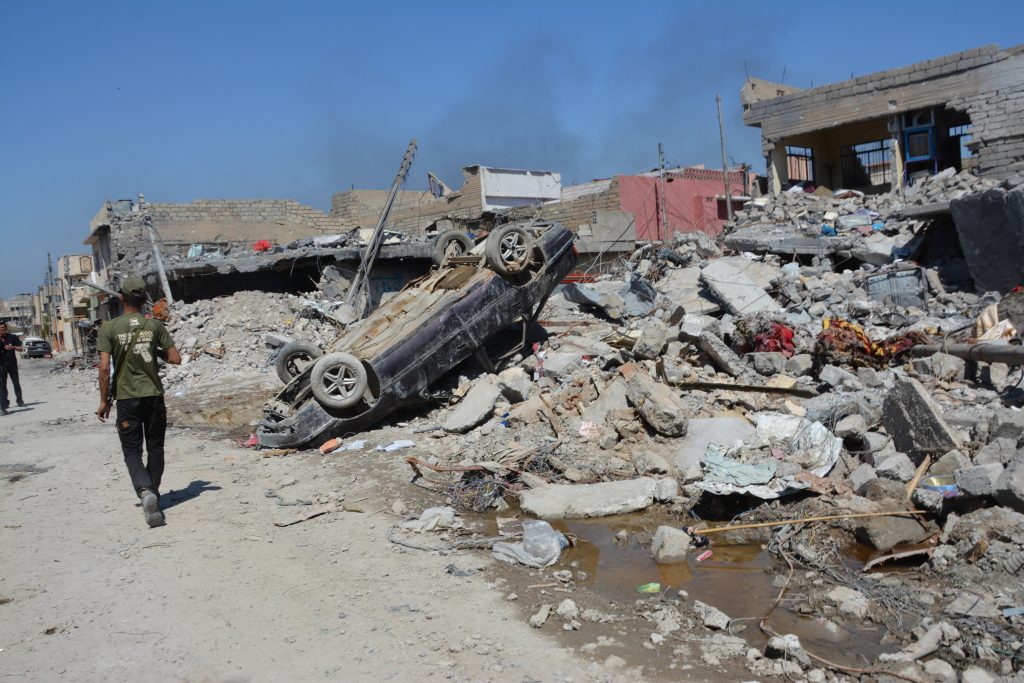 The rights group’s allegations came after the U.S. military acknowledged carrying out a March 17 airstrike in an area of western Mosul where residents say an explosion killed more than 100 civilians. U.S. officials did not confirm there were civilian casualties, but said a probe is underway.

Amnesty’s report also cites a second strike on Saturday that it said killed up to 150 people. The U.S.-led coalition said in a statement that it was investigating multiple strikes in western Mosul that allegedly resulted in civilian deaths.

Evidence gathered on the ground in Mosul “points to an alarming pattern of U.S.-led coalition airstrikes which have destroyed whole houses with entire families inside,” the Amnesty report said.

It said any failure to take precautions to prevent civilian casualties would be “in flagrant violation of international humanitarian law.”

In Baghdad, visiting U.S. army chief of staff, Gen. Mark A. Milley, said Monday that the exact cause of the March 17 explosion was still unknown, adding that “some degree of certainty will be known in the coming days following the investigation.”

Daesh is an Arabic acronym for the Islamic State terrorist group.

Initial results from an investigation launched by the Iraqi Defense Ministry showed that the airstrike hit an explosive-laden tanker truck which was heading toward the advancing troops, according to Brig. Gen. Yahya Rasool, an Iraqi military spokesman. The explosion damaged a number of buildings, including the one where IS was holding 130 civilians as human shields and where snipers were deployed on its roof, Rasool said.

“It is a new tactic being used by the members of this terrorist group, using big car bombs against the troops that impact the civilians to inflame the public,” he told The Associated Press. He added that the rules of engagement adopted by Iraqi troops and the coalition had not changed.

Speaking to reporters in Geneva, the spokesman of the U.N. human rights office called on the coalition to work to “minimize the impact” on civilians. Rupert Colville said IS terrorists are brazenly employing human shields, urging the coalition to “avoid this trap.”

Colville added that the rights office has tallied the deaths of at least 307 people between Feb. 17 and March 22, including 140 from the March 17 airstrike.

Iraqi forces began the assault on IS-held Mosul in October, after months of preparation and buildup. In January, Iraq declared the eastern half of Mosul — the Tigris River divides the city into an eastern and western sector — “fully liberated.” Iraqi government forces are now battling to retake the city’s western half.

Civilians, humanitarian groups and monitoring officials have repeatedly warned of the possibility of increased civilian casualties in western Mosul due to the higher density of the population there and the increased reliance on airstrikes and artillery. Faced with their toughest fight against IS yet, Iraqi and coalition forces have increasingly turned to airstrikes and artillery to clear and hold territory in Mosul’s west.

Unlike in previous battles against IS in urban settings in Iraq, the government instructed Mosul civilians to remain in their homes, to prevent large-scale displacement. In the battles for Fallujah and Ramadi, those cities were entirely emptied of their civilian population while Iraqi forces fought to push out IS.

When the operation to retake Mosul was launched, more than a million people were estimated to still be living in the city, Iraq’s second-largest. Today, the United Nations estimates about 400,000 people remain trapped in IS-held neighborhoods in western Mosul.

Amnesty International’s report quoted survivors and eyewitnesses of airstrikes that have killed civilians as saying that “they did not try to flee as the battle got underway because they received repeated instructions from the Iraqi authorities to remain in their homes.”