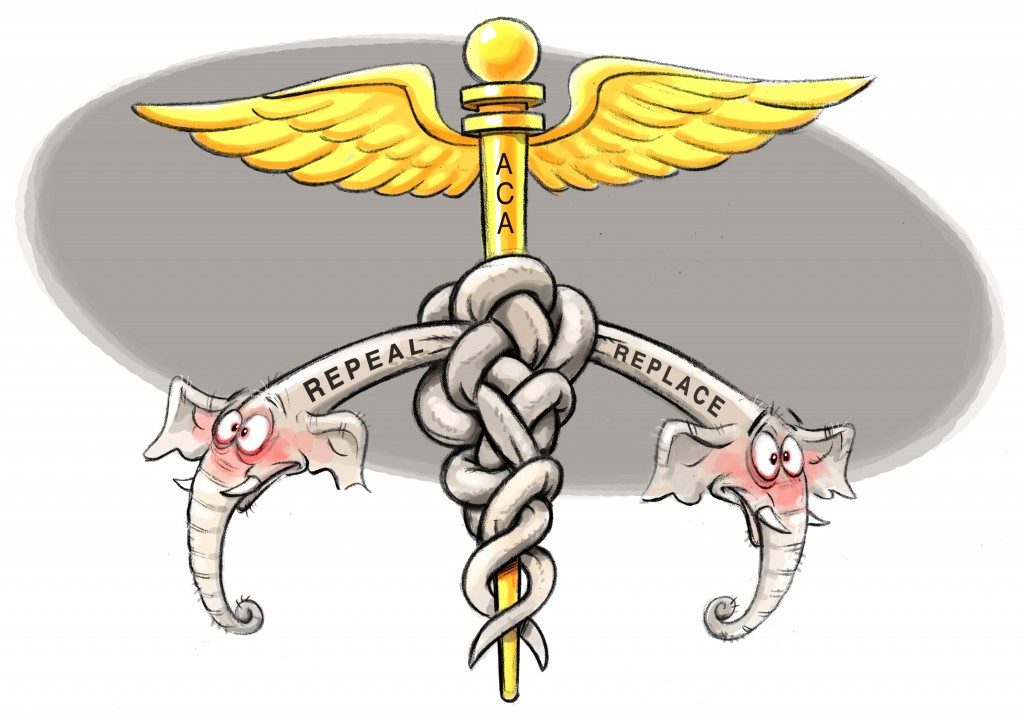 In a stunning upset, after spending the past seven years expressing its determination and firm commitment to abolish the law commonly known as Obamacare, the GOP was forced on Friday to yank the bill they had crafted to “repeal and replace” the health-care law. Only hours before the House of Representatives was scheduled to vote on the Republican bill, named the American Health Care Act (AHCA), Speaker Ryan had the unpleasant task of informing the president that the votes simply weren’t there.

And so, as Mr. Ryan put it, “We’re going to be living with Obamacare for the foreseeable future.”

The mainstream media was quick to portray this turn of events as a humiliating setback for President Trump, who made the repeal of Obamacare a focal point of his campaign. In reality, while the president did put much effort into trying to convince rebellious members of Congress to toe the line, unlike Obamacare itself, this replacement bill was not crafted in the White House. While the president clearly felt that the American Health Care Act was a far better idea than Obamacare, it did not reflect many of the priorities he stressed on the campaign trail.

Those seeking to trace the primary causes of Friday’s fiasco would be far better off starting their search on the other end of Pennsylvania Avenue. In hindsight, the real question is how the Republican leadership managed to so underestimate the rumblings among their own members, both from the right and the left.

There is no shortage of reasons why Obamacare had been deemed to be an unmitigated disaster by so many Americans. With health-care premiums rising by double digits in the past year alone, the price of prescription medications soaring, and so many insurance companies opting out of the system that consumers in about one-third of U.S. counties are now left without a choice of plans in individual markets, the anguished calls for scrapping Obamacare are based not on politics, but on painful real-life experiences.

At the same time, aspects of the bill have proven to be far more popular than its opponents had originally assumed. In reaction to clear public sentiment, essential elements of Obamacare, such as the requirement that companies must allow parents to keep young adult children on their plans until age 26, and that prohibited insurers from turning away people with pre-existing medical conditions, were retained in the American Health Care Act as well.

What the Republicans hoped to do was to salvage the parts that were considered likable, while replacing the rest. But when the analysts at the Congressional Budget Office (CBO) predicted that under the proposed plan, some 24 million people would lose coverage in the next decade, and costs for poorer and older people would be driven higher, moderate Republicans, with an eye to next year’s elections, balked. Seniors are fairly reliable voters, and when the CBO says that premium costs for a 64-year-old making $26,500 a year would have increased under the new law by a whopping $12,900 for a single year, it is enough to convince a politician that voting “nay” may be a better idea for his long-term career. The opposition from doctors, hospitals, consumer groups and AARP didn’t help matters either.

However, what turned out to be even more devastating was the unwillingness of the more conservative faction of the Republican Party to come around and support what they mockingly — but with some legitimacy — called “Obamacare 2.0” or “Obamacare lite.”

The president and Speaker Ryan tried their hardest to convince them otherwise, but for members of the House Freedom Caucus, elected by their constituents by promising to enact a strictly conservative agenda, the American Health Care Act was too similar to Obamacare.

The question that is likely on the minds of many was posed to Speaker Ryan at a news conference he held after pulling the bill.

To his credit, Speaker Ryan quietly responded, saying, “It’s a really good question. I wish I had a better answer for you.”

Allowing Obamacare to implode on its own, as many of its critics suggested on Friday, may sound like a wise move from a political prospective, but would take a terrible toll on ordinary Americans.

The steadfast refusal by the Democrats to accept the twin realities that Obamacare has severe failings and that they are now a minority party must come to an end. The GOP must also realize that ultimately, they will have to choose between caving in to the demands of the tea party or making painful compromises in order to get enough Democrats aboard to pass a new bill.

This is far too important an issue to be used as a way to score cheap points at the expense of the health and financial security of the American people. The only solution, as the president’s aides stressed on Sunday, is for Democrats and Republicans to put aside politics long enough to craft a replacement for Obamacare that would be both feasible and fair.