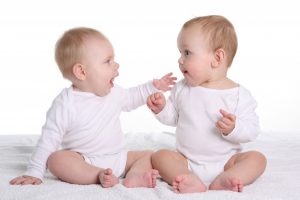 Toddlers. They’re next to each other. But are they playing together? Depends who you ask. Traditional “wisdom” had it that they’re not truly interacting, but engaging in parallel play. Preschool children are not aware of others’ thoughts and feelings. Hence, the side-by-side phenomenon, as opposed to truly engaged play.

Swiss psychologist Jean Piaget drew such conclusions after conducting extensive experiments with children in the mid-1900s. He was followed by scientists who, by and large, refined and afforded empirical evidence to his theory that young children are essentially trapped in a world of egocentricity, incapable of considering other perspectives and viewpoints.

However, Henrike Moll, assistant professor of developmental psychology in the University of Southern California, avers that researchers have recently employed more sophisticated methods of assessing children’s responses to various stimuli. “Instead of engaging toddlers in dialog,” Moll wrote in her March 22 article in The Conversation, “the newer methods capitalize on behaviors that have a firm place in infants’ natural behavior repertoire: looking … facial expressions, gestures … several puppet-shows [were acted out] in front of two-year-old children. In these puppet shows, Cookie Monster left his precious cookies on stage … What the protagonist did not know was that [someone took his cookies] … Children bit their lips, wrinkled their nose or wiggled in their chair when [Cookie Monster] came back, as if they anticipated the bewilderment and disappointment he was about to experience.” Moll also referenced Hungarian research that noted responses of 6-month-olds(!) that may indicate a capacity for empathy. The key was taking careful note of the precise length of time that the babies maintained eye-contact with a particular scene.

While not rejecting the essential model of the very gradual, other-awareness development that Piaget espoused, Moll believes that the more recent, fine-tuned studies do “reveal that there is much more going on in toddlers’ and even infants’ minds than was previously believed. With the explicit measures used by Piaget and successors, these deeper layers of kids’ understanding [could not] be accessed. The new investigative tools demonstrate that kids know more than they can say.”

Toddlers playing side-by-side — according to Moll’s vantage point — suggests there is indeed interaction going on between the tots, albeit in a different form than we grown-ups are used to. That does make sense, doesn’t it? After all, if both children had absolutely zero interest in the other who occupies his proximity, why would they bother to set themselves up like that? Clearly, there must be some basic level of awareness — and, perhaps, even communication, albeit in “baby language.” The key to accessing this knowledge was to decipher that baby language, to pick up on the very subtle nuances of baby behavior that can serve as windows into what the very young child may be thinking or feeling. Piaget seems to have been measuring children by an adult yardstick, which — according to Moll — necessarily falls short of the mark because it fails to “capitalize on behaviors that have a firm place in infants’ natural behavior repertoire.” Or, in other words, test babies in their own language.

As Pesach inches ever closer, this is a salient thought to bear in mind. Chazal make it clear that we’re enjoined to relate the account of Yetzias Mitzrayim even to a child who is “tongue tied” and can’t get a proper question out of his mouth — something that, from an intuitive standpoint, may have seemed counter thereto. Why not just focus on the kids, we may have thought, who grasp what we’re telling them and can properly participate, and send the “little ones” off to play or sleep? And it’s not only insofar as sippur Yetzias Mitzrayim is concerned. As soon as a child begins to babble his first few words, the halachah mandates that you teach him the pesukim of Torah tzivah lanu Moshe and Shema Yisrael. The Aruch HaShulchan explains: Even though the child does not grasp what you are teaching him, it nevertheless embeds the fundamentals of emunah deep into his psyche.

Moll, in her article, notes that a big part of the shift of how scientists view babies’ minds has to do with modern theorists’ belief that “knowledge cannot be pieced together [solely] from experience but must be innate.” In other words, human beings possess inherent faculties of knowledge, and experience is but a tool to actualize that potential. From a Torah standpoint, this goes without saying. We have a neshamah — the source of thought and knowledge — from the time we’re born. As we mature, and through our life’s efforts, its light shines through and is manifest. Without a doubt, our core human faculties are not just experientially acquired, but are innately infused in our basic makeup.

Don’t write off a child’s abilities just because adults may not be immediately gratified by his response. Rather, as Harav Yaakov Weinberg underscored, note what the passuk says: “In order that you shall relate it into the ear of your child.”

“Even if you have but spoken the words into his ear,” Rav Weinberg emphasized, “you have achieved a great accomplishment!”