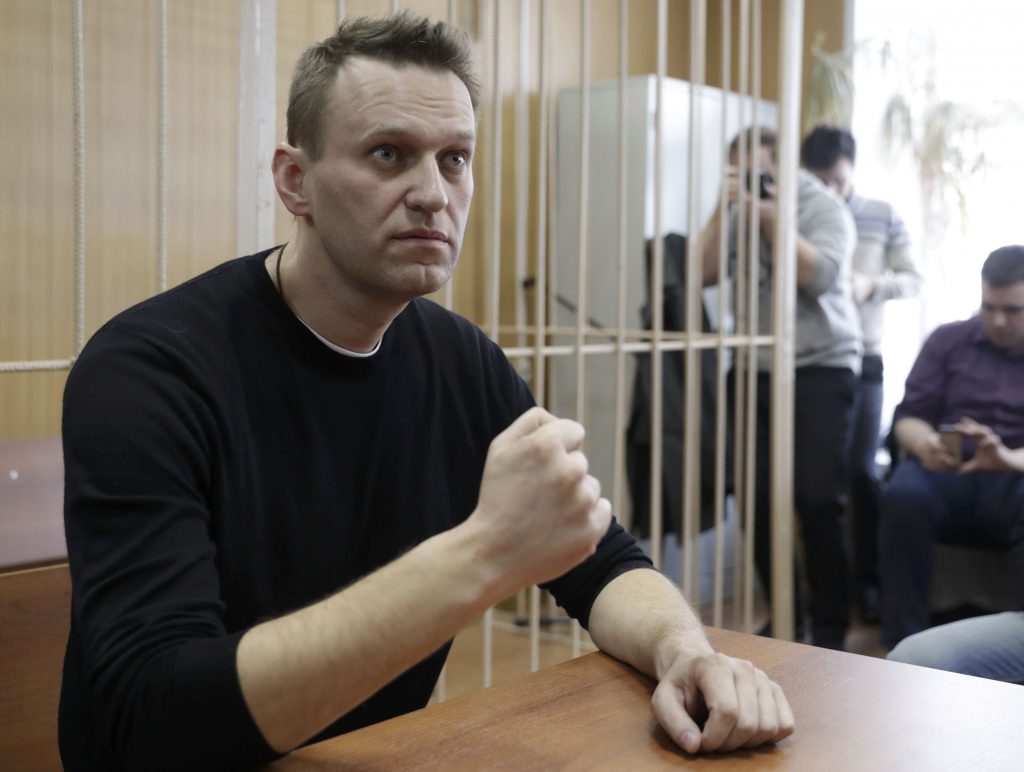 Russian opposition leader Alexei Navalny, who organized a wave of nationwide protests against government corruption that rattled authorities, was jailed for 15 days on Monday by a Moscow court for resisting police orders.

Mr. Navalny was arrested Sunday as he walked to a protest in Moscow and spent the night in jail before appearing in court.

Tens of thousands of anti-corruption protesters took to the streets across Russia on Sunday in the biggest show of defiance since 2011-2012 anti-government protests. President Vladimir Putin’s spokesman on Monday chided opposition organizers for putting people’s lives at risk in the unauthorized protests and defended the actions of Russia’s helmeted riot police, which critics called heavy-handed.

Journalists and well-wishers on Monday packed the courtroom in central Moscow where Navalny was taken. He posted a selfie on Twitter from there, saying: “A time will come when we’ll put them on trial too — and that time it will be fair.”

The 40-year-old Navalny, Russia’s most popular, charismatic opposition leader, has been twice convicted on fraud and embezzlement charges that he has dismissed as politically motivated. Navalny, who is currently serving a suspended sentence, has also recently announced his bid to run in Russia’s 2018 presidential election.

“Even the slightest illusion of fair justice is absent here,” Navalny told reporters Monday at the defendant’s bench, complaining about the judge striking down one motion after another. “Yesterday’s events have shown that quite a large number of voters in Russia support the program of a candidate who stands for fighting corruption. These people demand political representation — and I strive to be their political representative.”

The Kremlin has dismissed the opposition as a Westernized urban elite disconnected from the issues faced by the poor in Russia’s far-flung regions. Yet Sunday’s protests included demonstrations in the areas that typically produce a high vote for President Vladimir Putin, from the far western city of Chita in Siberia to southern Dagestan’s capital of Makhachkala.

Russian police say about 500 people were arrested in the protests Sunday, but a human rights group published a list of detainees that has more than 1,000 names. On Monday, the European Union called on Russian authorities to release the demonstrators.

“The Kremlin respects people’s civic stance and their right to voice their position,” Putin spokesman Dmitry Peskov told reporters. “We can’t express the same respect to those who consciously misled people and who consciously did it yesterday and provoked illegal actions.”

Mr. Peskov defended the Russian police in riot gear who were seen manhandling protesters, some of whom were minors, calling their response “highly professional and lawful.” He also claimed that underage protesters in Moscow were promised cash if they were arrested.

Asked about the Kremlin’s reaction to the wide geography of the protests, something that has not been seen at least since 2012, Peskov said “the Kremlin is quite sober about the scale of yesterday’s protests, and are not inclined to diminish them or push them out of proportion.”

Mr. Putin “constantly talks to people” and is well-briefed on the sentiment in the country, Peskov insisted.

Russian state media completely ignored the protests in their broadcasts on Sunday, and authorities didn’t comment on it in any way.

Russian law allows officials to sanction or ban demonstrations, although Navalny and other opposition activists often have defied official bans.

Over the years, Navalny, a lawyer, has evolved from a lone blogger to someone who leads a group of like-minded activists, the Anti-Corruption Foundation, whose full-time job is to investigate official corruption.

Separately on Sunday, police arrested Navalny’s associates who were at their office, setting up and monitoring a webcast of the Moscow rally. Thirteen of them spent the night at a police station while authorities raided their office, reportedly removing all equipment. It wasn’t immediately clear what charges they may be facing. The activists were taken to court late Monday afternoon.

Local media on Monday reported protesters still in detention and some facing a trial later on.