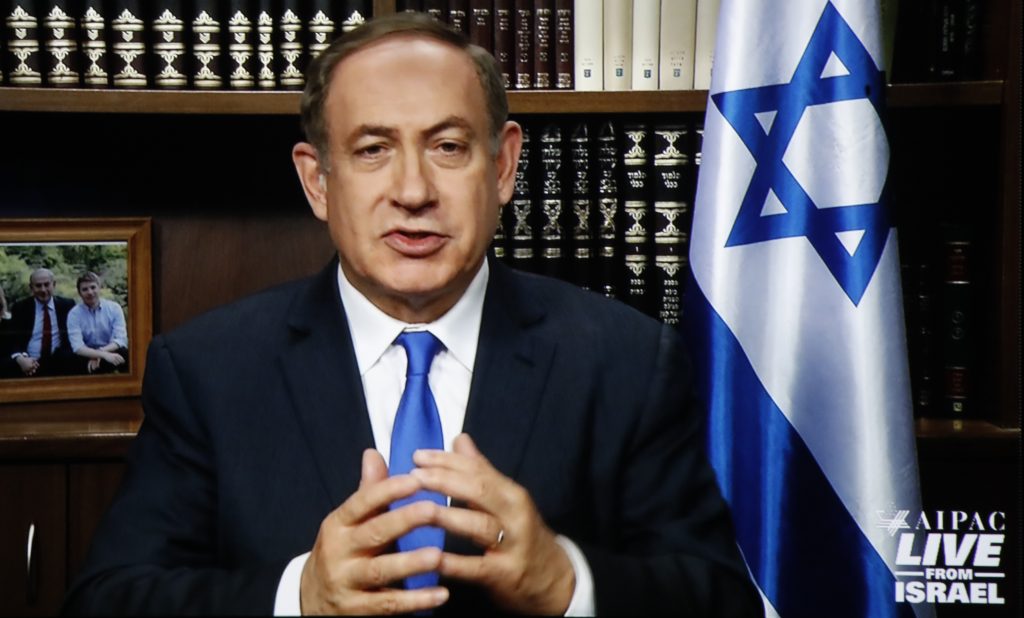 Israeli Prime Minister Binyamin Netanyahu effusively praised the Trump administration in remarks via satellite to the AIPAC Policy Conference in Washington on Monday.

Netanyahu had initially planned to attend the annual gathering in person, which he has done a number of times in the past, but decided that there were matters in Israel that required his on-the-scene handling.

“I wanted to be with you today, but I heard that you have 18,000 participants and I began to worry that the registration line waiting would be too long, so I’m happy to be with you from Jerusalem,” Netanyahu quipped.

Addressing the just-confirmed ambassador to Israel with a hint that the embassy might yet be moved to Yerushalayim, he said, “I take this opportunity to congratulate my friend, David Friedman, and his wife, Tammy. David, I look forward to welcoming you warmly to Israel, and especially to Yerushalayim.

“For the security of both Israel and the United States, we must ensure that the forces of militant Islam are defeated. We won’t let them drag humanity away from the promise of a bright future to the misery of a dark past.

“I am confident that the United States and Israel will stand together, shoulder to shoulder, to ensure that light triumphs over darkness and hope triumphs over despair.

“That means preventing Iran from ever — from ever — developing nuclear weapons. That is our policy; it will always be our policy. And our partnership means also confronting Iran’s aggression in the region and its terrorism around the world. It means utterly vanquishing ISIS — not partly — utterly vanquishing ISIS. It means building alliances with moderates in the region, those moderates who seek to build a better future and embrace modernity and peace. In this battle between modernity and medievalism, more and more countries in the region and outside the region, around the world, realize that Israel is on their side.

“I am proud of the unique contribution Israel is making to the world — a contribution to humanity that vastly exceeds our size. I want to give you an example of that. Last week, Intel Corporation bought an Israeli company, Mobileye. This is a company that produces driverless car technology, the technology of the future. Now, Intel not only paid this Israeli company 15 billion dollars, it also did something else. It gave them the keys. It said, ‘You, Mobileye, in Israel, in Yerushalayim,’ — not far from my office — ‘you manage and direct all our driverless car companies around the world.’ Because, you see, as this example shows, and as you can see from many, many, many other cases, Israel is fast becoming a global technological power and we’re very, very proud of this.

“Now, all of this is possible because of Israeli ingenuity and Israeli determination. It’s the same ingenuity and determination that has built our strong army, our robust economy, our resilient society. But we haven’t done it alone. Israel wouldn’t be the country it is today without the steadfast support of the United States of America. All of you should be proud of the work you’ve done to strengthen that friendship year after year, decade after decade.

“I am confident our alliance will grow even stronger in the years ahead. As you know, I had an exceptionally warm meeting with President Trump last month. I want to thank the president for his strong support for Israel. I want to thank Vice President Pence for his warm words for Israel last night. The administration is showing its commitment to Israel by turning those words into policies. You see that reflected, you see that expressed in Ambassador Haley’s standing up for what’s right for Israel and the truth at the United Nations. You see it in the budget request submitted by President Trump. It leaves military aid to Israel fully funded, even as the fiscal belt is pulled tighter. And we appreciate that.

“In Israel we are deeply grateful for the generous support of the president, the Congress and the American people. We know, as you do, that this support is an investment in our common security and in our common future.

“And so does the pursuit of peace. Israel’s hand and my hand is extended to all of our neighbors in peace. We teach peace to our children. And it’s time the Palestinian Authority do the same. It must stop teaching hatred to its children. It must stop paying terrorists. It must stop denying our legitimacy and our history. It must, above all, once and for all, recognize the Jewish state. Israel is committed to working with President Trump to advance peace with the Palestinians and with all our neighbors.