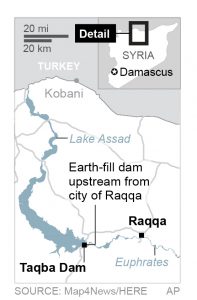 A U.S.-backed Syrian alliance of Kurdish and Arab militias on Sunday stormed a military airport in northern Syria held by Islamic State, close to the country’s largest dam which may be in danger of collapse.

The Syrian Democratic Forces (SDF) took between “60 to 70 percent” of the airport near Tabqa city on the Euphrates River on Sunday, but fighting continued in and around the facility, spokesman Talal Silo told Reuters.

The SDF, backed by U.S. special forces in a campaign that has driven Islamic State from large swathes of northern Syria, fights separately from other rebel groups that seek to topple President Bashar al-Assad’s rule.

The SDF have been battling the militants near the Tabqa dam and airbase west of the city of Raqqa in an accelerating campaign to capture Islamic State’s stronghold.

Islamic State said on its social media channels that Tabqa dam had been put out of service and all flood gates were closed. It said the dam was at risk of collapse because of airstrikes and increased water levels.

The dam on the Euphrates is about 25 miles upstream from Raqqa. The SDF has been battling to capture it since Friday.

A Britain-based war monitor, the Syrian Observatory for Human Rights, said it had also learned from its own sources that the dam had stopped functioning but that Islamic State remained in control of its main operational buildings and turbines.

The dam is about 2.8 miles long. The SDF has advanced a small distance along the dam from the northern bank but its progress is slow because Islamic State has heavily mined the area, the Observatory said.