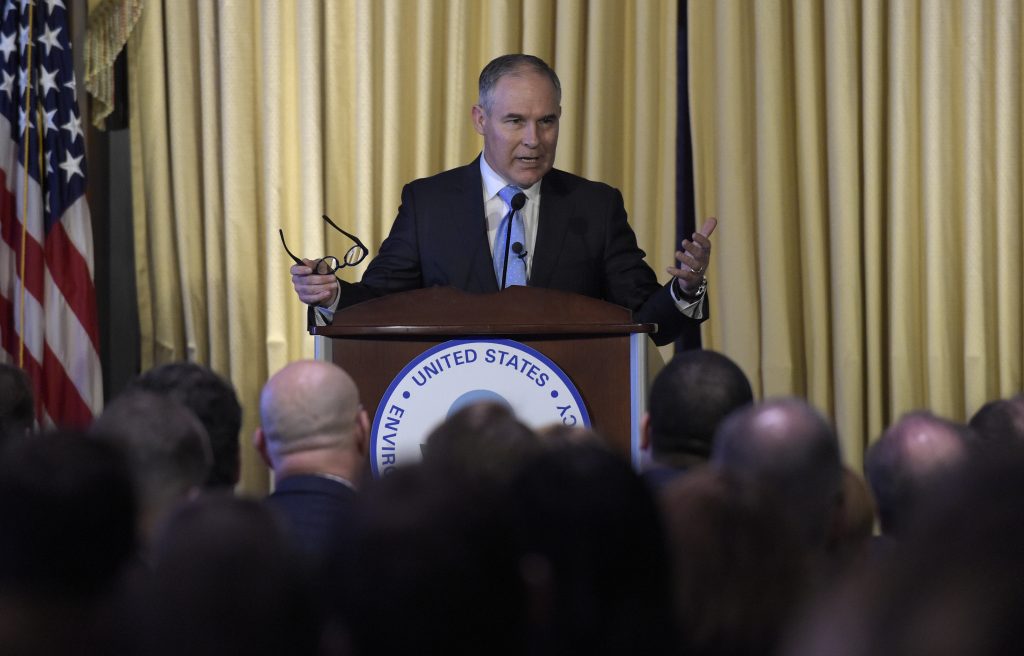 “The executive order is going to address the past administration’s effort to kill jobs across this country through the Clean Power Plan,” Pruitt said on an ABC program on Sunday.

Pruitt, the head of the Environmental Protection Agency, said Tuesday’s order will be followed swiftly by actions to “make sure that whatever steps we take in the future will be pro-growth, pro-environment but within the framework of the Clean Air Act.” He said it will be legal and is “an effort to undo the unlawful approach the previous administration engaged in, and do it right going forward.”

Under Obama, the EPA set a goal of reducing carbon-dioxide emissions by 32 percent below 2005 levels by the year 2030, and its Clean Power Plan dictated specific targets for states to reach. The initiative has been in legal limbo since the Supreme Court stayed it in February 2016. Still, utilities have already shed coal-fired electricity and added natural-gas and renewable power, partly in a bid to satisfy the looming requirements.

Opponents of the rule argue that the EPA overstepped its regulatory authority under the Clean Air Act by giving states broad carbon-cutting mandates instead of imposing specific requirements on individual facilities.

President Donald Trump’s long-awaited executive order also is slated to compel Interior Secretary Ryan Zinke to lift a moratorium on the sale of new coal leases on federal land. The actions set in motion by the order could take years to play out bureaucratically, but the directive will deliver immediate symbolic value.

Rescinding Obama’s Clean Power Plan could help Trump fulfill his pledge to “cancel job-killing restrictions” on domestic energy. It also would undercut the carbon-cutting pledge that the U.S. and nearly 200 other countries made in Paris in 2015 – an accord that Trump may disavow.

Support from coal miners helped propel Trump to victory by aiding wins in Pennsylvania, West Virginia and other states that have seen jobs tied to the fossil-fuel decline. Trump has repeatedly promised to put miners back to work.

The change is not expected to return coal to its earlier dominance in electricity production, but the fossil fuel may see moderate growth as a result, according to projections from the Energy Information Administration. Use of natural gas by power plants also could decrease.

Even before he became EPA administrator, Pruitt was fighting the Clean Power Plan. As the state’s attorney general, he had Oklahoma join more than two dozen other states, plus electric utilities, labor unions, business groups and coal miners, in challenging the rule. An array of environmental groups, public health advocates, renewable-energy developers, large corporations and 18 other states defended the initiative.

The U.S. Court of Appeals heard arguments on the challenge last September but hasn’t ruled. The Trump administration can file a motion to hold the matter in abeyance as a way to begin rule-making aimed at rescinding the measure administratively. Environmental activists who are already defending the rule in court have vowed to fight such a move.