Robots Could Take Over 38 Percent of U.S. Jobs Within About 15 years, Report Says 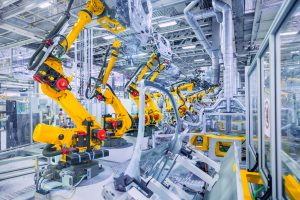 More than a third of U.S. jobs could be at “high risk” of automation by the early 2030s, a percentage that’s greater than in Britain, Germany and Japan, according to a report released Friday.

The analysis, by accounting and consulting firm PwC, emphasized that its estimates are based on the anticipated capabilities of robotics and artificial intelligence, and that the pace and direction of technological progress are “uncertain.”

It said that in the U.S., 38 percent of jobs could be at risk of automation, compared with 30 percent in Britain, 35 percent in Germany and 21 percent in Japan.

The main reason is not that the U.S. has more jobs in sectors that are universally ripe for automation, the report says; rather, it’s that more U.S. jobs in certain sectors are potentially vulnerable than, say, British jobs in the same sectors.

For example, the report says the financial and insurance sector has a much higher possibility of automation in the U.S. than in Britain. That’s because, it says, American finance workers are less educated than British ones.

While London finance employees work in international markets, their U.S. counterparts focus more on the domestic retail market, and workers “do not need to have the same educational levels,” the report said. Jobs that require less education are at higher potential risk of automation, according to the report.

Other industries that could be at high risk include hospitality and food service and transportation and storage.

Analysts have said truck driving probably will be the first form of driving in the U.S. to be fully automated, as long-range big rigs travel primarily on highways — the easiest roads to navigate without human intervention.

But robots won’t necessarily replace so many human workers. The report highlights several economic, legal and regulatory hurdles that could prevent automation, even in jobs where it would be technologically feasible.

For one, the cost of robots — including maintenance and repairs — could still be too expensive compared with human workers. And in the case of self-driving vehicles, questions remain about who is liable in an accident.

In other words, moving robots outside of a controlled environment is “still a big step,” said John Hawksworth, chief economist at PwC in Britain.

Mnuchin also said automation would enable human workers to do more productive jobs at higher wages. “It’s taking jobs that are low-paying,” he said. “We need to make sure we are investing in education and training for the American worker.”

Automation could end up creating some jobs, the PwC report said. Greater robotic productivity could boost the incomes of those behind the new technology, which Hawksworth said could flow into the larger economy.

Sectors that are harder to automate, such as health care, could also see a rise in jobs, he said.