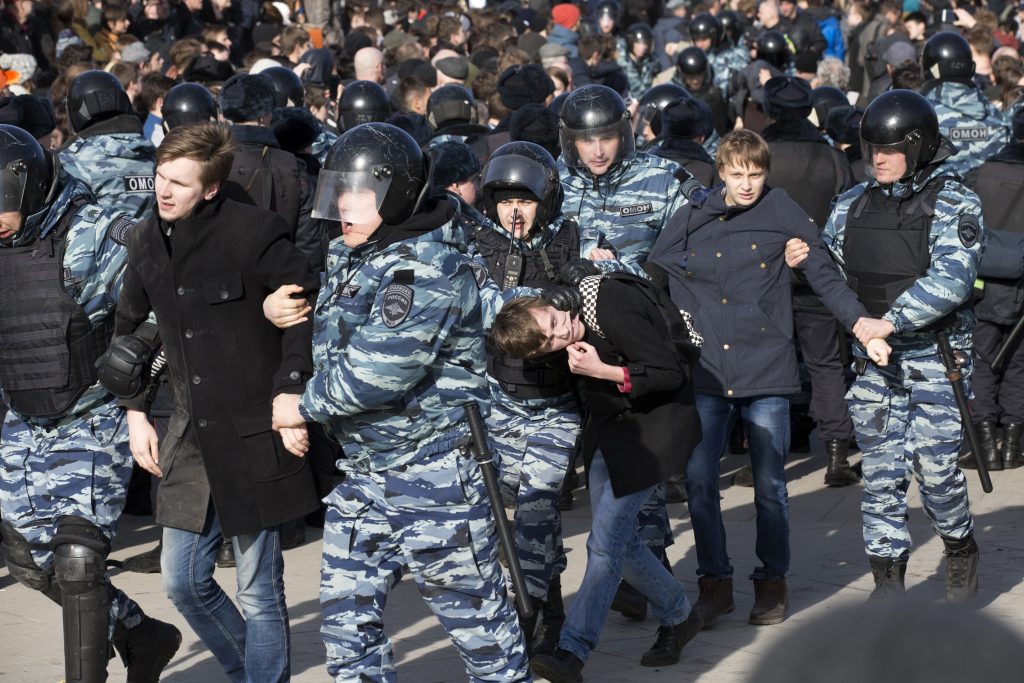 A wave of unsanctioned rallies swept across Russia on Sunday to protest corruption in the government of President Vladimir Putin, in a nationwide show of defiance not seen in years, and one the Kremlin had tried in vain to prevent with bans and warnings.

Too angry to be cowed, they poured into the street, fed up with their country’s wide-reaching corruption and a government unwilling, or unable, to stop it. Police responded with barricades, tear gas and mass arrests in cities across Russia.

By Sunday evening, riot police in body armor and helmets hauled in more than 700 demonstrators in central Moscow, as the crowd, numbering in the tens of thousands, cheered and whistled and chanted, “Shame! Shame!”

One of the first detained in Moscow was the chief architect of the rallies, Alexei Navalny, who called on people to come to protest in the wake of his allegations that Prime Minister Dmitry Medvedev has amassed vineyards, luxury yachts and lavish mansions worth more than $1 billion.

Authorities charged Navalny and other members of his Moscow-based anti-corruption foundation with extremism; one of his group was charged with broadcasting the rally illegally. If that’s the case, a lot of people are going to be in trouble; thousands of iPhones recorded as police closed off central Pushkin Square, lined major streets and hauled anyone carrying signs into large buses. Also among the detained was American Alec Luhn, an accredited reporter for the U.K. Guardian newspaper.

A man with a sign that read “We Found Your Money” and depicted drawings of the luxury boats and estates mentioned in Navalny’s report was dragged down and carried off by police seconds after he took the sign out.

“This is all about corruption, everyone here knows that all of our leaders are thieves,” said Vitaly Kerzunov, a protester who had come to Moscow from Belgorod, about 400 miles to the south. He wanted to take out his own poster, wrapped in a black plastic bag, but he feared arrest.

Fear was one thing authorities were counting on to keep people away. On Friday, senior Russian police official Alexander Gorovoi warned that authorities would “bear no responsibility for any possible negative consequences” for people who do show up. Putin’s spokesman said that even telling people to come to the rallies was “illegal.”

Instead, the demonstrations appear to amount to the largest coordinated protests in Russia since the street rallies that broke out in 2011 and 2012 after a parliamentary election that opposition leaders decried as fraudulent.

State-run media was silent about the rallies throughout the day, but pictures posted on social-media sites like Twitter suggested that sizable rallies were underway across the country, and unofficial news agencies like the Riga-based Meduza carried extensive updates.

The privately-owned Interfax news agency reported on rallies across Siberia and in Russia’s Far East, where it said two dozen protesters had been detained. The agency cited police as saying about 7,000 protesters gathered in Moscow, but the crowd, which lined Moscow’s main artery, Tverskaya Street, on both sidewalks for more than a mile, and crammed the spacious Pushkin Square, appeared to be much larger than that.

For some time, the protesters blocked the street, until Interior Ministry troops in combat gear pushed them off. An irritant gas, similar to tear gas, was fired off; police later reported that it was someone in the crowd. A loudspeaker for about an hour after the rally began asked protesters who came out “on this spring Sunday” to go “express their will as citizens” at a park away from the center. Later, as scores of riot police filled the square, the message became more strident.

“You are participants in an unsanctioned demonstration,” the voice intoned. “Consider the consequences.”

Protesters responded by the thousands in the 21st-century way: They bombarded officers with selfies and videos. One grim-faced lieutenant in urban camouflage cracked a grin as he told the Post, “I must have been photographed 1,000 times today; no wait, much more than that.” Then he posed for another.

The Moscow protest presented an odd juxtaposition of anger and outdoor party. High school age children danced and laughed at the long lines of police as the crowd cheered, then led everyone in a chant “You can’t jail us all!” When a young man held up a pair of yellow rubber ducks – a reference to a detail in Navalny’s report that ducks have their own house at one of the lavish estates allegedly owned by Medvedev – he was immediately dragged off.

“Shame, shame,” screamed the schoolchildren. “Shame!” joined in a small group of pensioners.

Official Moscow has dismissed Navalny, who has said he will run for president in 2018, as a widely reviled nuisance whose allegations are an attention-grabbing stunt. Putin, who almost certainly will run for reelection, is hoping for a landslide to validate his six years of authoritarian rule, during which time the economy has slid, but Russia has asserted itself militarily in Syria and Ukraine.

One of the slogans for Sunday’s rallies is, “No one showed up,” a reference to the dismissal by authorities of Navalny’s popular support.

A young Muscovite couple, who gave only their first names, Alexei and Olga, had brought their one-year-old daughter, Agata. Weren’t they afraid?

“We wanted the leaders to see that we’re here,” Alexei said. “And we had no one to leave her with.”

Navalny, who emerged as an anti-corruption whistleblower, and took a leading role in the street protests that accompanied Putin’s 2012 return to the presidency, has been the target of fraud and embezzlement probes he calls politically motivated. In 2013, he was convicted of siphoning money off a lumber sale, a verdict that the European Court of Human Rights declared “prejudicial,” saying that Navalny and his co-defendant were denied the right to a fair trial.

In November, Russia’s Supreme Court declared a retrial, and Navalny was convicted of embezzlement and handed a five-year suspended sentence in February, which by Russian law would prevent him from running for president.