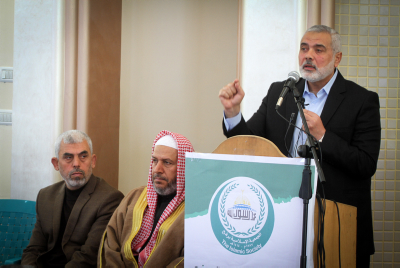 Israeli security forces were preparing for a Hamas terror attack in the wake of the elimination over the weekend of Mazan Fuqaha, a top Hamas terrorist who was found dead in Gaza Friday night. Hamas has vowed revenge for his shooting death, which it accused Israel of carrying out.

While Hamas has accused Israel many times of eliminating its terrorists and threatened revenge often, the current situation is seen as the first test for new top Hamas terrorist Yahya Sinwar, who recently took the reins of the terror group from Khaled Mashaal. Sinwar, like Fuqaha, was released from an Israeli prison in 2011 in the deal to release IDF soldier Gilad Shalit, and also immediately returned to terror activities.

Sinwar is a founder of the Hamas military wing and one of the kidnappers of IDF soldier Nachshon Wachsman, Hy”d, whom he helped murder. Sinwar’s brother Muhammad was one of the kidnappers of Shalit in 2006, and Yahya Sinwar assisted in that operation as well. He is considered among the more fanatic Islamists in the terror group, and has written in apocalyptic terms of “perpetual war” with Israel, according to reports. Sources in Gaza said that the response to Fuqaha’s death may not come immediately, but when it came, it would be “sharp.”

Meanwhile, Hamas authorities have shut down the Gaza border with Israel following the killing of Fuqaha.

Hamas Interior Ministry spokesman Iyad al-Bozum said Sunday that the Erez crossing point will be “fully closed in both directions” until further notice.

Suspecting that local collaborators with Israel were involved, Hamas has deployed dozens of checkpoints across the Gaza Strip, where drivers are asked to turn on their interior lights and hand over IDs for inspection. The closing of Erez also applies to journalists, aid workers and patients needing medical help in Israel.