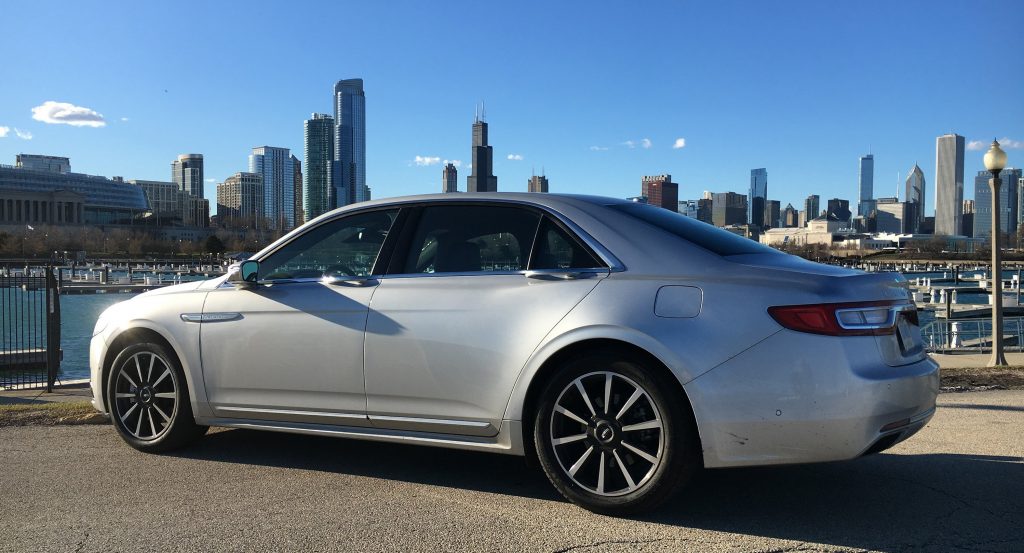 Sometimes, father knows best. This reluctant admission comes after a week with the 2017 Lincoln Continental, the first Lincoln in my adult lifetime that did not make my father’s unwavering lifetime support of a once-proud premium brand seem bewildering.

The only relevant Lincoln in my mind was the series of Town Cars we used to take on family vacations when I was a kid.

With the exception of the MKX crossover (the Navigator is so overdue for a redesign that the concept is old), Dad suffered our mocking of his MKZ, the lackluster state of Lincoln, including the MKT hearse, the Mark LT pickup (no, he didn’t buy one — no one did), the paltry presence at recent auto shows, and the relative revitalization of the competition, from Buick to Volvo.

But finally, with the return of the Lincoln Continental flagship full-size sedan, first launched in the WWII days and discontinued in 2002, it’s Dad’s turn to crow.

With its broad horizontal design, the Continental is sculpted into something that is both smart and looks good.

There is a metal honeycomb grille within a stretched hourglass form that rises up and out over the raised hood, then down to the rear of the car. The space where the door panels meet the windows might be the most subtle and interesting design element. It helps make the body one smooth, clean line with nothing but a chrome-plated Continental badge mucking up the flow. It looks good — elegance without ostentation, sophistication without smugness. The design falters at the boxier rear, which looks indistinct except for the huge trunk it houses, big enough to fit two hockey bags or a half-dozen mob informants.

The test model in Reserve trim came with 10-spoke, 19-inch wheels — the 20-inch wheels with seven dual spokes stand out more, and are worth the $750 upcharge.

Approach the car with fob in pocket and from eight feet away the doors unlock, side mirrors extend and accent lighting appears, from the logo projected on the ground by the door to the door handles shining blue. LEDs light up on the front and rear. Soft interior lighting illuminates the instrument panel and cup holders, as the start-stop button gently pulses.

“Every car should do that,” Dad said, as if to suggest Lincoln was the paragon of sophistication. Other luxury brands have what Lincoln calls “approach detection,” but not this subtle and not standard at this price point. Another point for the Lincoln fan.

The real charm of the Lincoln Continental is the natural placement of things, such as the door handles. The doors close with a soft kiss, no need to slam, and opening them from the inside requires just a press of the button on the door handle, right where the thumb would rest if you were to grip the handle to push it and get out. You don’t even need to push open the door, just the button.

Seat controls are on the door panel, like Mercedes-Benz, as are seat massagers, so no need to access the touch screen. Touch screens are not a luxury, they are a nuisance; hard to reach, clunky to engage and unsafe to utilize. We prefer a control dial in the console to access the info screen, à la the Germans, but most models sold in America don’t want to sacrifice coveted cup space.

The only good things to come out of a touchscreen are a bright map and a government-mandated backup camera. Self-parking and camera buttons flank the 8-inch touch screen, and 360-degree backup camera. On the left side are the electronic gear buttons. It’s an odd touch for everyone but Lincoln, which has been placing gear buttons on the center stack to clear space in the console for a while now. “Right where they should be,” Dad said. Though it was the source of great ridicule in Dad’s MKZ Hybrid, it actually made sense on the left side of the backup camera, like here’s where I’ll be backing up and parking so, yeah, engage gears here.

Redundant steering wheel controls that project the most used information on the wonderful dynamic instrument cluster are all within easy range of motion of the thumbs. Overall the cabin utilizes a smart, ergonomic layout that underscores the attention to detail necessary for a premium product.

“I told you,” Dad said, letting his smirk do the talking.

The control panel beneath the touchscreen isn’t as sophisticated, using red and blue buttons for hot and cold, with a basic font and design that are a sign of parts sharing. One nice touch is a rectangular slot beside the cup holders for a smartphone. Control panel and touch screen design are relatively minor complaints for a part of the car where consumers are logging many, many complaints, according to J.D. Power and anyone who has talked to a new car owner.

The voice commands are crisp, the instrument cluster logical and the seats are just absurd: For an extra $1,500 you get a massage from the 30-way power seats, which have thigh, head, lumbar, upper and lower bolster support, enough to make a man who has turned recliners into perfect molds of his body very, very happy. I liked making them snug in sport mode and letting it all hang out in comfort mode.

The all-wheel-drive Reserve came with the upgraded and most powerful of the three engine offerings, a twin turbo V-6 making 400 horsepower and 400 pound-feet of torque.

The power plant isn’t going to take your breath away from a standstill, but once the turbo hits the sweet spot just under 2,000 rpm, it puts a smile on your face. Even the Lincoln fanboy, who has owned his share of German sports cars, was impressed with the acceleration of the 4,500-pound sedan. Hitting it from a stop the six-speed automatic momentarily feels unsure if the dynamic all-wheel drive is ready to deliver torque to all four wheels. Stab the throttle and the insecurity returns, a sort of lurch and surge that is smoothed out by flooring it. On the highway, the front wheels take over to improve fuel economy. We averaged about 22 mpg combined.

The steering leans toward the lazy in comfort mode, and is a bit more responsive in sport mode. It still handles like a full-size American sedan, albeit a modern one. The Continental is built more for comfort than for speed, but has enough performance chops for nonlinear moves.

In that sense it reminded us of the Genesis G90 full-size sedan, and could come in about $5,000 less by trimming the Revel sound system luxury package. The Volvo S90 is more distinct, with a beautiful, spartan interior, but the Conti offers a new option to the performance-leaning German sedans, which is where Cadillac is heading.

This new Lincoln Continental appeals not just to patient Lincoln fans, but to a new class of buyer who doesn’t need luxury and performance in equal parts. It made a customer out of one passenger and for that, we finally understand.

2017 Lincoln Continental Reserve at a glance