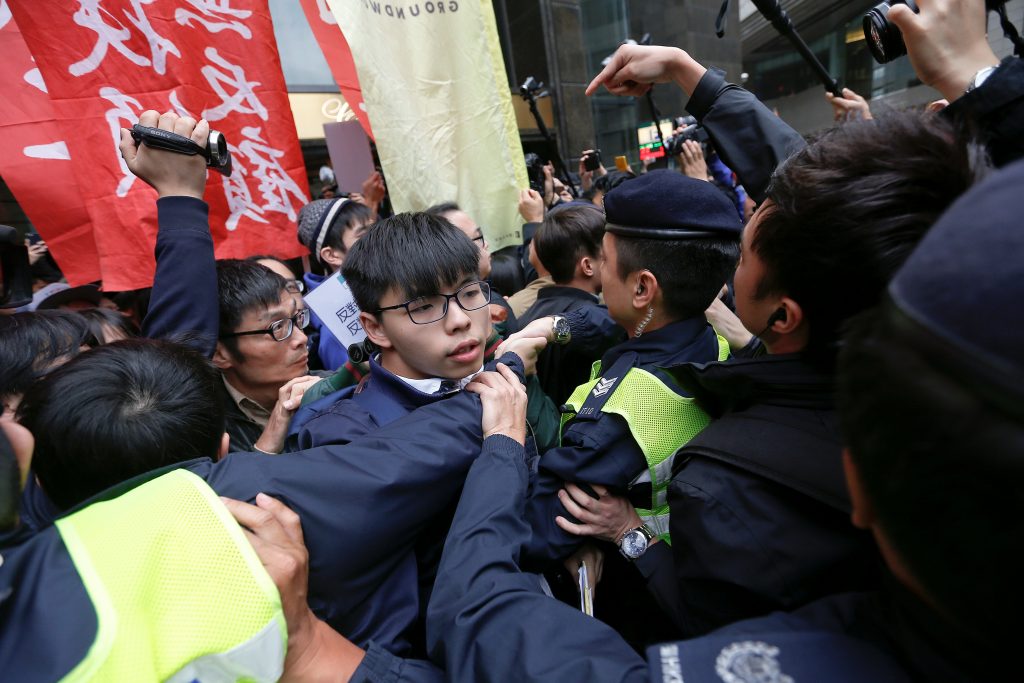 The majority of the city’s 7.3 million people have no say in deciding their next leader, with the winner chosen by a 1,200-person “election committee” stacked with pro-Beijing and pro-establishment loyalists.

Outside the voting center, there were some scuffles between protesters and police. The protesters denounced Beijing’s “interference” amid widespread reports of lobbying of the voters to back Lam, rather than the more populist and conciliatory former finance chief, Tsang.

Some democracy activists hung a yellow banner from a peak called Lion Rock, overlooking the city, with the slogan, “I want universal suffrage”.

Security was tight around the harborfront voting center with metal barricades and large numbers of police deployed, and protesters were kept well away from the immediate vicinity.

Since Hong Kong returned to Chinese rule in 1997, Beijing has gradually increased control over the territory even though China had promised wide-ranging freedoms and autonomy under the formula of “one country, two systems”, along with an undated promise of universal suffrage.

Many fear that Lam will continue the tough policies of staunchly pro-Beijing incumbent Leung Chun-ying, a divisive figure who ordered the firing of tear gas on pro-democracy protesters in 2014 and who was not seen to be defending Hong Kong’s autonomy and core values.

The political upheavals with Beijing over the city’s autonomy and democratic reforms – that many hoped would have allowed a direct election this time round – have roiled a new generation and weighed on the city’s economy, ranked 33rd globally by the World Bank in 2015.

Political and social divisions, mainly over democracy and anxieties over China’s creeping influence, have dominated political debate leading to some legislative and policy-making paralysis and the stalling of major projects, including a cultural hub and high-speed rail link to China.

While Hong Kong’s proximity to China has been a boon for the city, bringing in Chinese investment and spending, businesses have also faced growing competition from mainland Chinese firms in core sectors like services and property.

Housing prices, now among the world’s highest, are widely seen to have been pushed up by an unrelenting wave of buying from rich Chinese, intensifying anti-mainland China sentiment.

Many observers, businessmen and politicians have warned Hong Kong can’t afford another period of upheaval if it is to regain its former capitalist allure.

Beijing’s detention of five Hong Kong booksellers in late 2015, and the disappearance of a Chinese billionaire this year, have also undermined confidence in the “one country, two systems” formula.

While Beijing has not explicitly backed any candidate, senior officials have stressed certain conditions must be met including a new leader having the “trust” of China’s Communist leaders.

“Just because a candidate is leading popularity polls doesn’t necessarily mean you should vote for (that person),” outgoing city leader Leung said on Friday.