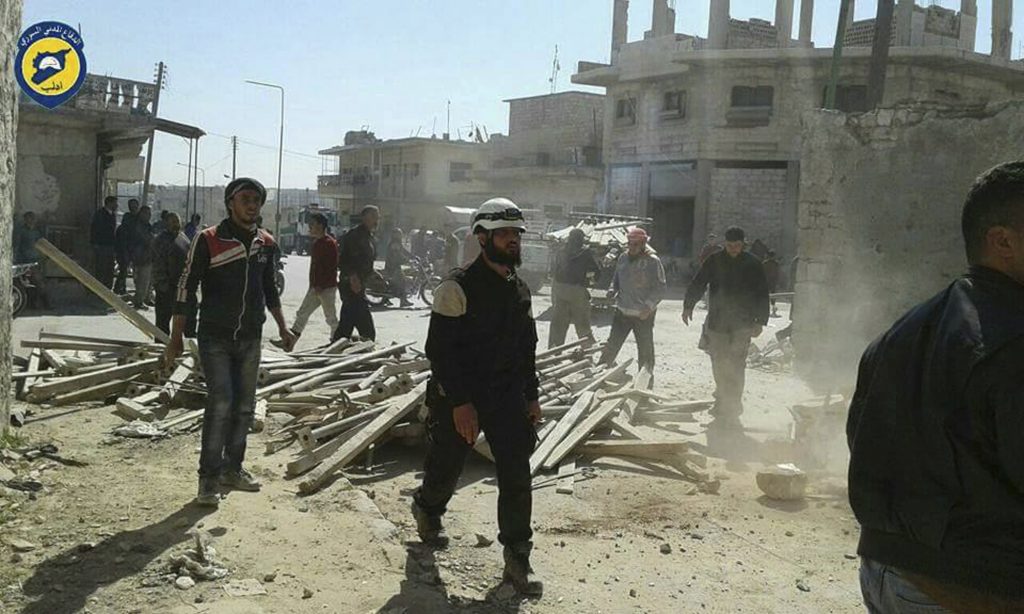 Airstrikes hit a women’s prison and a clinic in rebel-held parts of Syria on Saturday, killing and wounding scores of people amid clashes on multiple fronts between government forces and insurgent groups in some of the country’s worst violence in weeks, opposition activists said.

The airstrikes, which activists said included Russian air raids, concentrated on the rebel-held northwestern province of Idlib, the central province of Hama and suburbs of the capital Damascus that have come under attack by terror groups over the past week.

One of the airstrikes hit a main street in the Damascus suburb of Hamouriyeh, killing at least 16 people and wounding more than 50, activists said. The airstrikes caused wide destruction in the area.

The U.N. Special Envoy for Syria, Staffan de Mistura, said in a statement released in Geneva that he is deeply concerned by the recent escalation of violence in Syria, highlighting that it undermines a Dec. 30 ceasefire brokered by Turkey, Iran and Russia who back opposing parties in the conflict.

The statement said de Mistura had communicated with the foreign ministers of the three countries, appealing to them to exert urgent efforts to uphold the ceasefire.

Speaking after meeting on Saturday with the U.N. envoy in Geneva as part of a fresh round of Syrian peace talks, Nasr al-Hariri, the head of the main opposition delegation, lashed out at Assad’s “killing machine,” and both named and showed photos of some of the victims — including some featuring graphic imagery.

“This is the fault of warplanes,” he told reporters. “These are the ones who claim to fight terrorism, who are responsible for this horrible massacre in Hamouna.”

The Britain-based Syrian Observatory for Human Rights said the airstrikes on Hamouriyeh killed 16, including eight women and children, and wounded more than 50. The Local Coordination said 18 were killed and dozens were wounded.

Both groups said some people are still missing, and that the death toll could rise.

“They have been hitting Hamouriyeh for days but today they struck an area packed with civilians,” said Awis al-Shami of The Civil Defense search-and-rescue group, also known as the White Helmets.

The airstrikes come as terror groups have been on the offensive in Damascus and the central province of Hama for the past days. Government forces and their allies launched a counteroffensive capturing some of the areas they lost in Damascus and Hama.

The Observatory said a Friday night attack struck a prison run by militants, killing at least 16 people including prisoners and prison staff in Idlib city. It added that women were among the dead as well.

The monitoring group, which has a network of activists around the country, said some people were killed by gunfire as prison guards chased detainees who tried to flee after the attack.

The Syrian National Coalition, one of the largest opposition groups, said the airstrikes on Idlib targeted, among other things, a women’s prison, saying that dozens of people were killed or wounded.

The Observatory and the Syrian Civil Defense group, also known as the White Helmets, said an airstrike struck a clinic in the village of Kfar Nubul in Idlib province. They had no immediate word on casualties.

Idlib is a stronghold of Syrian insurgent groups and is regularly targeted by Syrian and Russian warplanes.

In the central province of Hama, Syrian government forces and their allies launched a counteroffensive, capturing some of the areas they lost in an attack by insurgents earlier this week.

The government-controlled Syrian Central Military Media said Saturday that government forces regained control of the village of Kawkab and repelled an attack on the town of Qamhana.

The Observatory reported intense clashes in the area adding that, under the pressure of shelling and airstrikes, insurgents had to withdraw from some recently gained areas.

On Wednesday, insurgents advanced to within a few kilometers of the government-held city of Hama in their new offensive spearheaded by an al-Qaida-linked group.

The fighting forced thousands of civilians to flee the area, according to international aid groups.