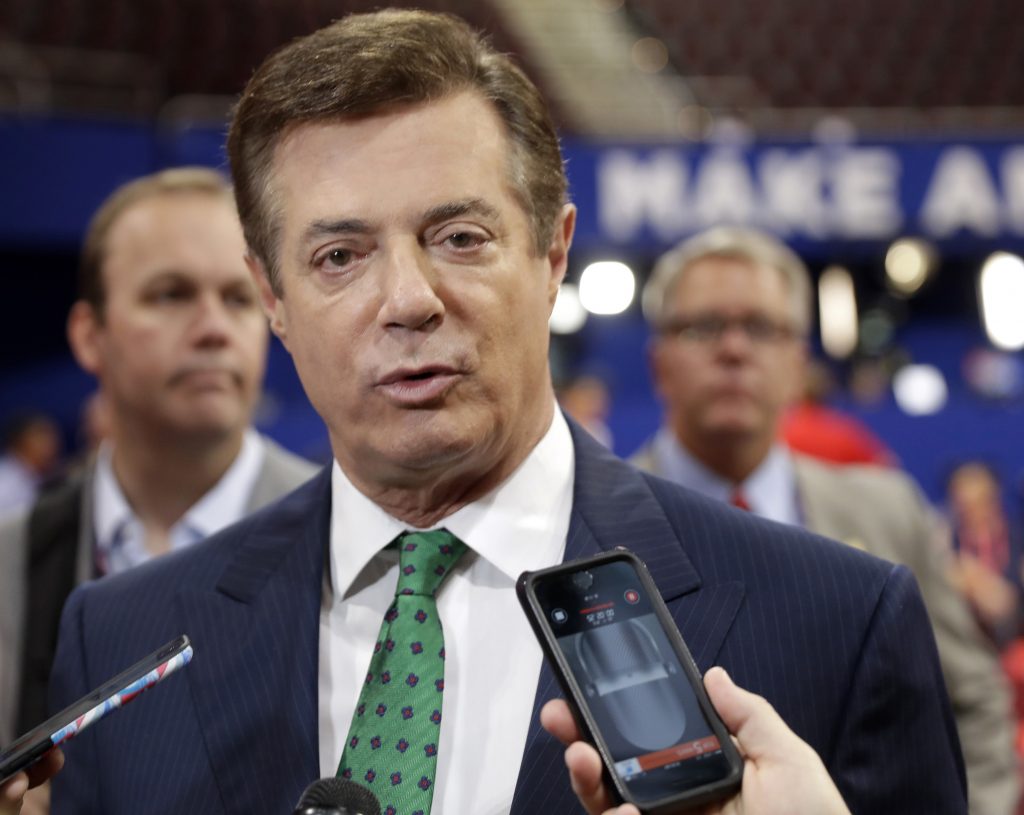 Information about Manafort’s transactions was turned over earlier this year to U.S. agents working in the Treasury Department’s Financial Crimes Enforcement Network by investigators in Cyprus at the U.S. agency’s request, a person familiar with the case said, speaking on condition of anonymity because the person was not authorized to publicly discuss a criminal investigation.

The Cyprus attorney general, one of the country’s top law enforcement officers, was made aware of the American request.

A spokesman for Manafort did not immediately respond to questions from the AP.

Manafort, who was President Trump’s unpaid campaign chairman from March until August last year, has been a leading focus of the U.S. government’s investigation into whether Trump associates coordinated with Moscow to meddle in the 2016 campaign. This week, the AP revealed his secret work for a Russian billionaire to advance the interests of Russian President Vladimir Putin a decade ago.

Federal prosecutors became interested in Manafort’s activities years ago as part of a broad investigation to recover stolen Ukrainian assets after the ouster of pro-Russian President Viktor Yanukovych there in early 2014. No U.S. criminal charges have ever been filed in the case.

It was not immediately clear what time period was covered under the government request for information about Manafort’s financial transactions in Cyprus. Manafort was known to route financial transactions through Cyprus, according to records of international wire transfers obtained by the AP and public court documents filed in a 2014 legal dispute in the Cayman Islands.

In the 2014 case, Manafort used Cypriot shell companies as part of a nearly $19 million deal with Russian billionaire Oleg Deripaska to purchase Ukrainian cable tv provider Black Sea Cable. Deripaska said that after taking the money, Manafort and his associates stopped responding to Deripaska’s queries about how the funds had been used.

As part of their investigation, U.S. officials were expected to look into millions of dollars’ worth of wire transfers to Manafort. In one case, the AP found that a Manafort-linked company received a $1 million payment in October 2009 from a mysterious firm through the Bank of Cyprus. The $1 million payment left the account the same day — split in two, roughly $500,000 disbursements to accounts with no obvious owner.

There is nothing inherently illicit about using multiple companies as Manafort was doing. But it was unclear why he would have been involved with companies in Cyprus, known for its history of money laundering before joining the European Union, with unclear sources of the money flowing in to them and with such secrecy surrounding the firms’ connections to Manafort.

A Treasury Department spokesman, Stephen Hudak, declined to answer the AP’s questions about Manafort’s records. “We often get press inquiries concerning individuals, and our policy is to never confirm, nor deny the existence, or non-existence, of any potential investigation,” Hudak said.

Cypriot officials said that further information would have to come to the agency through a formal request to the Cypriot Ministry of Justice and Public Order — under a mutual legal assistance treaty — although no request has been made, according to two officials who spoke on condition of anonymity because they were not authorized to publicly discuss the case.

Democrats on Capitol Hill who are part of two congressional investigations of Trump associates said the new disclosures about Manafort’s work for the Russian billionaire guarantee that Manafort will be sought as a key witness in upcoming hearings. Sen. Martin Heinrich, D-N.M., who is a member of the Senate intelligence committee, said revelations about Manafort’s work were “serious and disturbing.”

The AP’s reporting about Manafort’s activities “undermines the groundless assertions that the administration has been making that there are no ties between President Trump and Russia. This is not a drip, drip, drip,” said Democratic Rep. Jackie Speier of California, a member of the House intelligence committee. “This is now dam-breaking with water flushing out with all kinds of entanglements.”

The White House said that President Trump had not been aware of Manafort’s work on behalf of Deripaska, a close Putin ally with whom Manafort eventually signed a $10 million annual contract beginning in 2006. “To suggest that the president knew who his clients were from 10 years ago is a bit insane,” Press Secretary Sean Spicer said. “I don’t know what he got paid to do,” Spicer said, adding, “There’s no suggestion he did anything improper.”

Spicer declined to comment Thursday on the information about the offshore financial transactions.

The Financial Crimes Enforcement Network, known as FinCEN, was established in 1990 and became a Treasury Department bureau soon after the Sept. 11, 2001, terror attacks. It collects a vast repository of records that financial institutions are required to report under the Bank Secrecy Act, such as suspicious activity reports and currency transaction reports, and assists law enforcement agencies in helping analyze complex data.

The agency is a part of an international network of so-called financial intelligence units that share information with each other in money laundering and terrorism financing investigations. Its work has been critical in helping officials piece money trails together and identify leads for criminal investigators.