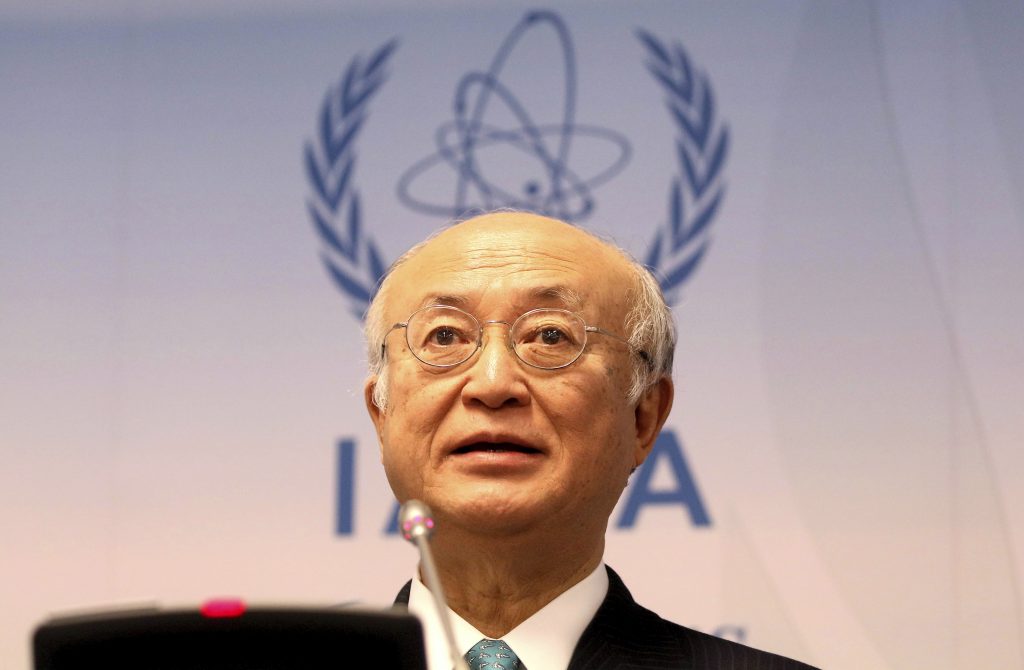 The inspections regime put in place to closely monitor Iran’s nuclear activity is in jeopardy unless the U.S. and other nations contribute more money, the head of the U.N.’s International Atomic Energy Agency said on Wednesday.

Yukiya Amano, the agency’s director general, said he used his visit to Washington to make the case for an increase to the Trump administration and to U.S. lawmakers who control the federal budget. He said the Vienna-based agency in 2018 needs a 2.1 percent increase to its regular operating budget of roughly 370 million euros, about $400 million.

“Without an increase, the IAEA will not be able to implement the verification and monitoring activities in Iran,” Amano said.

Yet even a continuation of current levels of U.S. funding — which Amana said makes up 25 percent of the IAEA’s regular budget — is not a given. As part of its proposal to slash the State Department’s budget by almost one-third, the Trump administration has floated deep cuts or even elimination of U.S. funding for the United Nations and dozens of affiliated agencies like the IAEA.

Republicans and Democrats in Congress have pushed back sharply on President Donald Trump’s proposed cuts, an indication that Congress likely will restore at least some of the dollars that President Trump wants to eliminate. Amano said he’d stressed the need to fund inspections in Iran as part of the nuclear deal in his meetings with lawmakers and State Department leaders.

“The desire to fund it, they need to discuss more. But at least I felt sympathy from lawmakers,” Amano said. Of Secretary of State Rex Tillerson, he added, “He listened to me, but it is too early to give us any indication now.”

It costs the IAEA roughly 9.2 million euros, or about $9.9 million, to monitor Iran’s nuclear program under the deal that the U.S. and Western powers struck with Tehran. Of that, slightly more than half comes from the agency’s regular budget.

The IAEA also receives “voluntary” contributions above and beyond its regular budget from the U.S. and other countries. But Amano stressed that those funds are ill suited for funding the salaries of IAEA inspectors in Iran, for example, because of the need to ensure the inspectors aren’t seen as beholden to any particular country’s interests.

Under the nuclear deal, Iran agreed to limits on its ability to enrich uranium and strict monitoring to ensure compliance, in exchange for easing of economic sanctions. The goal was to ensure that Iran couldn’t quickly develop nuclear weapons, although Tehran has always denied that intention.

President Trump, during the presidential campaign, threatened to scuttle the deal or to renegotiate it, and as recently as this week said that “nobody” could figure out why President Barack Obama signed it. Still Trump has yet to take steps to alter the deal, and his administration has said it’s reviewing it.

Amano, speaking to journalists in Washington, said he’s not received any indication from the Trump administration that it intends to scrap the deal.