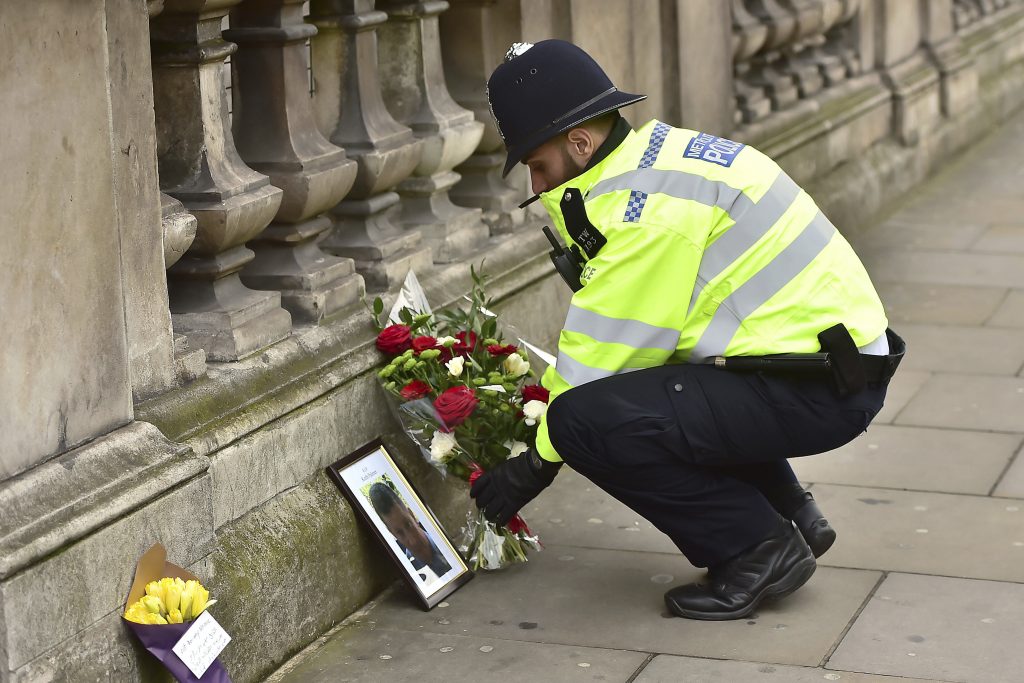 The terrorist who killed three people near Parliament in London Wednesday before being shot dead was named on Thursday as British-born Khalid Masood, who was once investigated by MI5 intelligence officers over concerns about violent extremism.

Islamic State claimed responsibility for the attack in a statement issued by its Amaq news agency, but did not name Masood and gave no details. It was not clear whether the attacker was directly connected to the jihadist group.

Police said Masood, 52, was born in the county of Kent in southeast England and was most recently living in the West Midlands region of central England.

“Masood was not the subject of any current investigations, and there was no prior intelligence about his intent to mount a terrorist attack,” the Metropolitan Police said in a statement.

“However, he was known to police and has a range of previous convictions for assaults, including GBH (grievous bodily harm), possession of offensive weapons and public order offenses.”

Prime Minister Theresa May earlier told Parliament that the attacker had once been investigated by the MI5 intelligence agency over concerns about violent extremism, but was a peripheral figure.

During five minutes of mayhem in the heart of London on Wednesday, Masood sped across Westminster Bridge in a car, plowing into pedestrians. He then ran through the gates of the nearby Parliament building and fatally stabbed an unarmed policeman before being shot dead.

Police arrested eight people at six locations in London and Birmingham in the investigation into the attack, which Prime Minister May said was inspired by a warped Islamist ideology.

The Enterprise rental car company said the vehicle used in the attack had been rented from its Spring Hill branch in Birmingham, which is located in the West Midlands.

“An employee identified the vehicle after seeing the license plate in an image online. We ran another check to verify, and immediately contacted the authorities,” said company spokesman John Davies.

About 40 people were injured in the attack, of whom 29 remain in hospital, seven in critical condition.

The attack took place on the first anniversary of attacks that killed 32 people in Brussels, and resembled Islamic State-inspired attacks in France and Germany where vehicles were driven into crowds.

The dead were two members of the public, the stabbed policeman and Masood.

“My thoughts, prayers and deepest sympathy are with all those who have been affected by yesterday’s awful violence,” Queen Elizabeth said in a message.

U.S. tourist Kurt Cochran, of Utah, was named as one of the dead in a social-media post by family member Shantell Payne.

“With a heavy heart I must pass the sad news of our beautiful brother, father, husband, son and friend Kurt Cochran, he could not overcome the injuries he received in the London terror attacks,” Payne wrote.

Her post said that Cochran’s wife, Melissa Payne Cochran, was in hospital with a broken leg and rib and a cut on her head, but would recover.

U.S. President Donald Trump paid homage to Cochran in a tweet, calling him “a great American” and expressing condolences to his family and friends.

Westminster Bridge and an area around Parliament were still cordoned off early on Thursday, and forensic investigators in light blue overalls examined the scene where the attacker was shot. The bridge re-opened on Thursday afternoon.

It was the deadliest attack in Britain since 2005, when 52 people were killed by Islamist suicide bombers on London’s public transport system. Police had given Wednesday’s death toll as five but revised it to four on Thursday.

“A terrorist came to the place where people of all nationalities and cultures gather to celebrate what it means to be free, and he took out his rage indiscriminately against innocent men, women and children,” said May.

A minute’s silence was held in Parliament and in front of police headquarters at 0933 GMT, in honor of the victims — 933 was the shoulder number on the uniform of Keith Palmer, the policeman who was stabbed to death.

May was in Parliament at the time of the attack, a short distance away from the spot where the attacker was shot. She was whisked away as the chaos erupted.

A government minister was widely praised for trying to resuscitate Palmer, walking away from the scene with blood on his hands and face.

Many have been shocked that the attacker was able to cause such mayhem in the heart of the capital equipped with nothing more than a hired car and a knife.

“This kind of attack, this lone-wolf attack, using things from daily life, a vehicle, a knife, are much more difficult to forestall,” Defence Minister Michael Fallon told the BBC.

Three French high-school students aged 15 or 16, who were on a school trip to London with fellow students from Brittany, were among the injured.

French Foreign Minister Jean-Marc Ayrault traveled to London to show solidarity and met some of the other students who were on the school trip and their families at a hotel near the hospital where the injured were being treated.

He told reporters that the lives of the three youngsters were not in danger. Ayrault later attended the session in Parliament where May spoke. France has been hit by repeated deadly Islamist attacks over the past two years.

May said the fact that normal life was going on across Britain was the greatest response to the attack.

“It is in these actions — millions of acts of normality — that we find the best response to terrorism: a response that denies our enemies their victory,” she said.