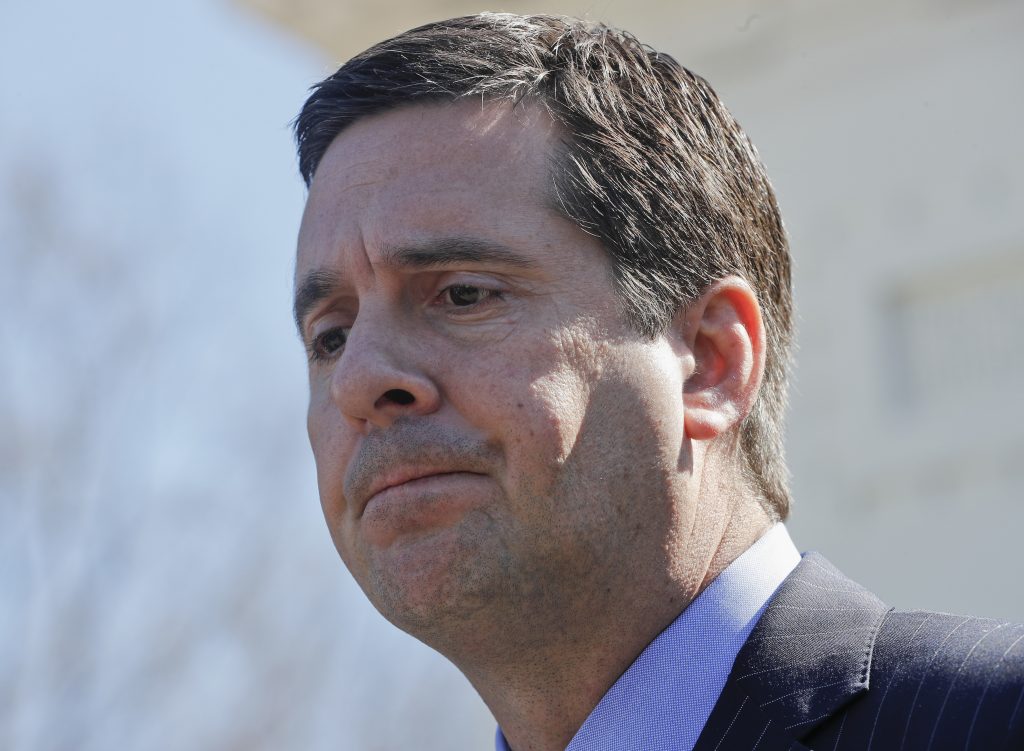 House Intelligence Committee Democrats say Chairman Devin Nunes, R-Calif., apologized to them on Thursday during a closed-door meeting for his handling of revelations about surveillance that potentially could have been collected about President Donald Trump and his associates during the transition period.

Nunes’s apology was “generic,” Intelligence Committee member Rep. Jackie Speier, D-Calif., said on CNN, adding that it was “not clear” which part of his actions for which he was sorry.

Nunes came under heavy fire from Democrats Wednesday after going first to the press, then to the White House, and then to the press again before consulting with colleagues about what he said was fresh intelligence about the president and his campaign aides.

On Thursday, Nunes said it was a “judgment call” to personally brief President Trump before speaking with his Intelligence Committee colleagues, who are actively investigating allegations that Russia interfered in the 2016 elections and suspected links between Trump aides and the Kremlin.

The California Republican also promised colleagues they would see the documents he was referring to on Friday, which is when Nunes is expecting the NSA, CIA and FBI to respond to a request for a full list of names of people whose identities were disclosed through “incidental collection,” or legal collection by U.S. intelligence agencies of communications by foreign entities that could involve American citizens. Nunes said on Wednesday that the information he has seen may show that President Trump or his aides were picked up in such incidental collection during the transition.

Some Democrats have accused Nunes of speaking publicly in an attempt to deflect attention away from Monday’s congressional hearing, at which FBI Director James Comey not only confirmed that the FBI is looking into allegations that the Trump team coordinated with Russian officials during the election, but said flatly that Trump’s accusation that he was being wiretapped by the Obama administration was false.

Said one Democratic committee official: “This looks like the President got in hot water over his wiretapping claim, and the White House had to find a way to give him an off-ramp.”

Nunes would not say whether his source was affiliated with the White House or what type of incidental collection had occurred — whether it was direct conversations between Trump or his team and a foreign agent, or whether two foreign entities were simply picked up discussing the president. He only said that the communications did not involve Russia.

The intelligence community regularly monitors the communications of foreign individuals acting as agents of a foreign government, as they do some people suspected of terrorism, pending court approval. The communications of Americans who are in touch with those foreign agents can thus be “incidentally collected” — as happened when former national security adviser Michael Flynn was picked up talking to Russian Ambassador Sergey Kislyak, who was under surveillance.

The problem potentially arises when the identities of those Americans are “unmasked” — that is, revealed to others in the government. There are legal procedures allowing for such unmasking when it is deemed to be necessary for understanding the context of the intelligence in communications.

Nunes said on Wednesday that he was concerned about the unmasking in the information he viewed. But after speaking with Nunes, Intelligence Committee ranking member Adam Schiff, D-Calif., said that only one name in the report Nunes viewed was “unmasked” — and that name had nothing to do with the Trump team.

Nunes told reporters that it was “very clear to me” who the identities of the individuals in the report were, and that they were members of the Trump team.

That has sparked charges that if anybody is revealing more than they should, it is Nunes — for potentially telling the public that hidden names in surveillance reports referred to the president and his advisers, something that is likely classified information.

Nunes said that the information itself was classified, but argued that disclosing the existence of intelligence reports and the nature of them was not improper.

Nunes’s own staff members were not aware of the chairman’s decision to go public and brief the president and was dismayed by his actions, said several individuals familiar with the matter.

“He betrayed the independence that our committee must show to get to the bottom of what happened with Russia’s interference in our elections,” said Rep. Eric Swalwell, D-Calif. “He should have come to the committee first. He never under any circumstances should have gone to the president, whose campaign is under federal criminal and counterintelligence investigations.”

Swalwell said Nunes’s actions prove the need for an independent commission to investigate the Russia-related allegations because “the people we have been counting on to be impartial in getting to the bottom of what happened have shown that they cannot be.”

Swalwell has co-authored legislation to establish such a commission with Rep. Elijah Cummings, D-Md.

But Democrats are not the only ones calling to take this investigation away from Congress following Nunes’s actions on Wednesday.

He called for either a select committee or an independent commission to look into the matter.