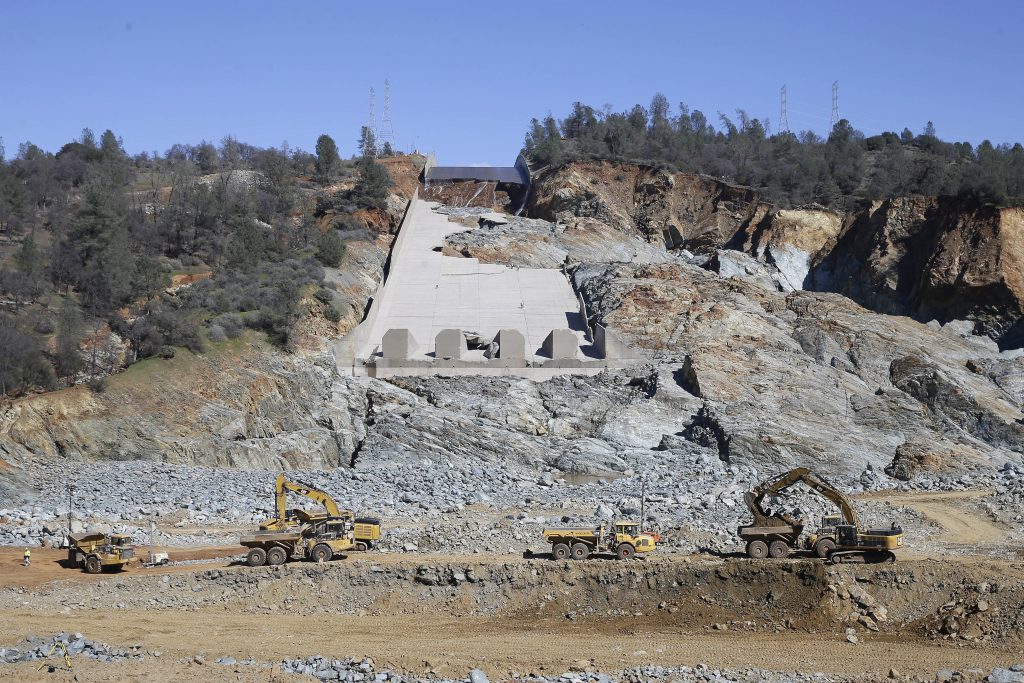 California is not just fighting nature as it attempts to repair the spillways at the nation’s tallest dam that was badly damaged last month by surging storm waters. It’s also racing the clock.

Safety experts say there is no time for delays in the state plan to restore the critical main spillway at the 770-foot Oroville Dam, and they warn that California would face a “very significant risk” if the spillway is not in working order by fall, the start of the next rainy season.

A Nov. 1 target to fix the spillway presents “a very demanding schedule, as everyone recognizes,” said a report prepared by an independent team of consultants and submitted to federal officials last week. A copy of the report was obtained Wednesday by The Associated Press.

Also Wednesday, the state Legislative Analyst’s Office warned that tens of billions of dollars are needed for repairs and updates for aging dams, levees, wetlands and other projects in California’s flood-management system.

The report on the spillways sketches a challenging array of problems at the Northern California dam, where last month authorities ordered the evacuation of 188,000 people after surging releases of water tore away big chunks of the main spillway and then the dam’s second emergency spillway.

At the time, officials feared rapid deterioration of the emergency spillway could send large, uncontrolled torrents of war from the lake behind the dam through surrounding towns.

The spillway is used to release water when the reservoir is nearing full capacity.

During the releases, water was even seeping from seemingly undamaged stretches of the main spillway, the five-member team found. Only 12 inches thick, the concrete spillway is heavily patched, at some places by clay stuffed into holes below the concrete.

“This calls into question whether the portions of the slab that appear undamaged by the failure should be replaced,” the consultants said, raising the prospect of a much bigger, long-term repair job.

Repair contracts will have to be awarded by June.

“A very significant risk would be incurred if the Gated Spillway is not operational by November 1,” the report said.

The report does not specify what that means.

However, officials with the state Department of Water Resources, which operates the dam, fear a huge rupture that opened in the main spillway could expand to cripple the flood gates that send out controlled releases of water and keep water from spilling over uncontrollably.

In a statement, spokeswoman Maggie Macias said the agency’s objective is to have a fully functional spillway before the start of the next storm season.

“We’ll be working round-the-clock through spring, summer and fall to make that happen,” she said.

The independent consultants were selected by the state at the request of the Federal Energy Regulatory Commission.

Experts on the panel either declined comment on Wednesday or could not immediately be reached.

The experts called it “absolutely critical” that the dam’s state operators not use the faulty emergency spillway again.

The state should start work now redesigning a new emergency spillway for the 50-year-old dam, the consultants said.

The experts inspected the main spillway before delivering the recommendations to the state.

Fully repairing the spillway will likely take two years, the consultants said. California still has at least a month left in the current, unusually wet rainy season. A record snowfall in the Sierra Nevada will send more runoff into Lake Oroville as weather warms.

State water officials plan to use the damaged main spillway sparingly to control the runoff, releasing water to try to ensure that it doesn’t spill out over the non-functional emergency spillway again.