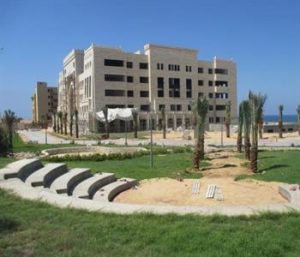 Broad streets that were built in the Gaza Strip in recent months.The rehabilitation of the Gaza Strip is well under way. Notwithstanding all the complaints about neglect and siege, over 100,000 housing units and hundreds of projects have been built over the past several months, according to the Coordinator of Government Activities in the Territories (COGAT).

A little more than two years have passed since the rebuilding began, and the change is evident across in the Gaza Strip. What began as a reason for cautious optimism has gradually come to be regarded as the engine of economic recovery.

Since October 2014, at the end of Operation Protective Edge, the Palestinian Authority, the United Nations and Israel have worked together to implement a plan for economic recovery. The PA brought in building materials and raised money abroad; the U.N. officials were responsible for ensuring that construction materials reached the civilian sector and were not waylaid by Hamas operatives; and Israel, which has allowed for the work to proceed, and overseeing the importation of materials and equipment through the Kerem Shalom crossing.

By January 2017, over 7 million tons of construction materials were brought into Gaza, and 102,331 housing units damaged in the fighting were renovated, out of a total of 130,000 which had been designated for renovation by the U.N. More than 11,500 new homes are currently in various stages of construction, some hundreds of which are ready for occupancy.

Since then, over 224 projects were completed, and another 500 are approaching completion. These include hospitals and clinics, water treatment plants, mosques, stadia, community centers, schools, and more.

However, there is more than a little concern now in Gaza that the tremendous investment of the last two years will go down the drain in the event of another war.

Over the course of time, international observers inspectors saw that Hamas operatives were increasing their efforts to divert trucks carrying construction materials to their terror activities. They duly informed the Israeli authorities, who then imposed an immediate freeze on building imports, to keep them out of the hands of the terrorist organization.

“The message was clear an unambiguous – we will not let Hamas exploit civilian reconstruction for its military purposes,” declared Gen. Yoav Mordechai, the head of COGAT.

Only after UNRWA official Suhail al-Hindi, who had been secretly elected to Hamas’ politburo, was removed from his post, and Nickolay Mladenov, U.N. Special Coordinator for the Middle East Peace Process promised tighter oversight on his personnel, did Israel agree to lift the embargo, by degrees, three months later.

“If the residents of Gaza will think of their future, not just the liberation of ‘Palestine,’ “ says Prof. Arnon Sofer of Haifa University, “then an artificial island is definitely the answer.”

“But, to my regret, Transportation Minister Yisrael Katz’s proposal will remain merely theoretical, because I don’t think Gaza is looking for solutions at present. On the contrary, the rulers there are not interested in the betterment of the population.

“Gaza suffers from a humanitarian crisis – 2.6 million people living on 360 square kilometers, without resources, without adequate infrastructure for water and electricity. The situation will explode at some point if something is not done. One of the solutions is to expand its territory seaward.

“Owing to the shallowness of the coastal waters, the conditions for an artificial island are ideal, such as exist nowhere else in the region,” said Prof. Sofer.

However, he is not optimistic that it will happen, given the current realities in Gaza. But “he moment the rulers in Gaza decide to do something for the people there, there will be plenty to do, and they should turn to Yisrael Katz across the border.”