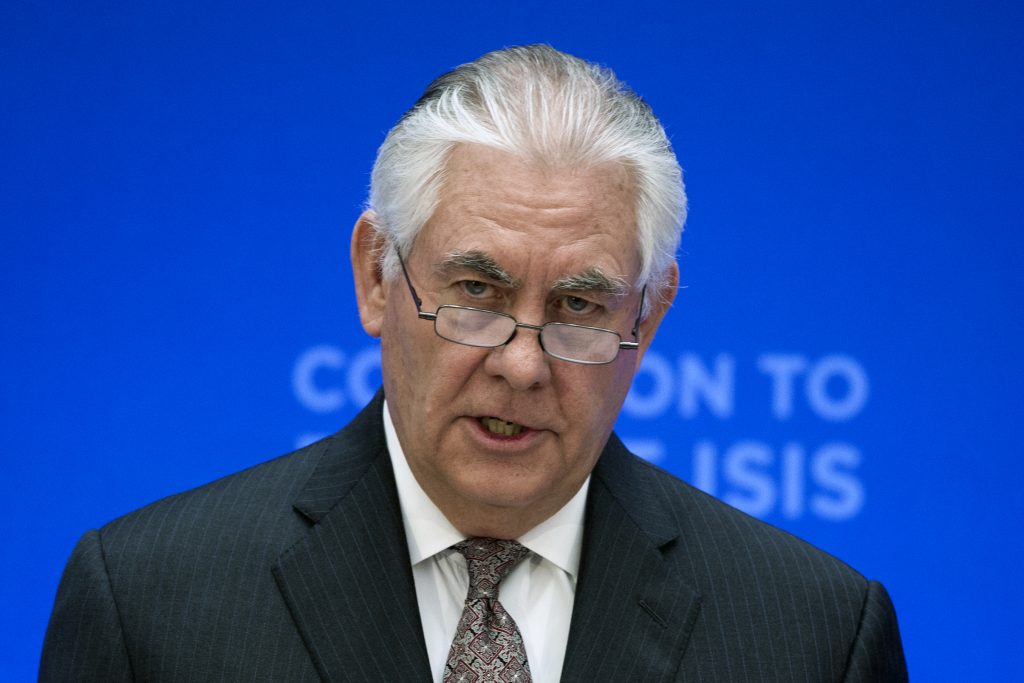 The United States on Wednesday urged coalition partners to step up efforts to defeat Islamic State terrorists as top officials from 68 nations gathered in Washington to assess the fight to retake Iraq’s second largest city and advance on the terrorists’ self-declared Syrian capital.

“I recognize there are many pressing challenges in the Middle East, but defeating ISIS is the United States’ number one goal in the region,” Secretary of State Rex Tillerson told the coalition’s first ministerial gathering since President Donald Trump took office.

Tillerson and Defense Secretary Jim Mattis were hosting Iraqi Prime Minister Haider al-Ababi and foreign ministers from the coalition partners at the State Department to explore new ideas to expand the fight against Islamic State in the Iraqi city of Mosul and ready the operation to push the terrorists from Raqqa, Syria.

They also are preparing for the group’s defeat by lining up humanitarian and reconstruction assistance.

The meeting started amid the latest manifestation of the accelerating, U.S.-guided military campaign. The Pentagon said it provided an airlift for Syrian fighters taking part in an offensive underway in Tabqa, west of Raqqa. A spokesman said U.S. military advisers are on the ground in the Tabqa area to help coordinate the operation, which aims to block IS fighters from western approaches to Raqqa.

Tillerson alluded to the intensified campaign, but said the Trump administration was still refining its strategy.
“A more defined course of action in Syria is still coming together,” he said. “But I can say that the United States will increase our pressure on ISIS and al-Qaida and will work to establish interim zones of stability, through cease-fires, to allow refugees to return home.”

The reference to “zones of stability” appeared to stop short of “safe zones,” which the U.S. military has been extremely reluctant to commit to enforcing in Syria, even as Mr. Trump and others have raised the idea at various times.
Nothing Tillerson outlined departed significantly from the Obama administration’s approach, which focused on using local forces to retake territory along with efforts to disrupt Islamic State recruitment and financing, and the blueprint of the multilateral effort seemed unchanged. The strategy is complicated in Syria, where a partnership with Kurdish forces has prompted difficult discussions with Turkey, which sees the terrorists as a national security threat.

Tillerson said the United States would play its part and pay its fair share of the overall operation. But he said other nations, particularly those which have faced IS or IS-inspired attacks, must do more. He said increased intelligence and information sharing could overcome traditional rivalries between difference agencies and governments, and advocated an enhanced online effort to halt the spread of terrorist views, especially as the Islamic State terrorist group loses ground in Iraq and Syria.

As Islamic State becomes more encircled, the mission will change. Officials expect in the coming months to see the dissipation of surviving fighters into underground cells that could plan and mount attacks throughout the Middle East, South and Central Asia, Europe, South America and the United States.

“As we stabilize areas encompassing ISIS’s phony physical caliphate in Iraq and Syria, we also must prevent their seeds of hatred from taking root elsewhere,” Tillerson said. “We must ensure ISIS cannot gain or maintain footholds in new regions of the world. We must fight ISIS online as aggressively as we would on the ground. A digital caliphate must not flourish in the place of a physical one.”
The officials in Washington also hope to figure out how best to deal with the inevitably messy humanitarian and political aftermath of the anticipated IS battlefield defeat. There are widespread fears of chaos, such as what emerged after NATO’s intervention in Libya in 2011, that could further fracture the region’s deep ethnic and religious splits, and complicate the stated goal of preserving the Syrian and Iraqi states.