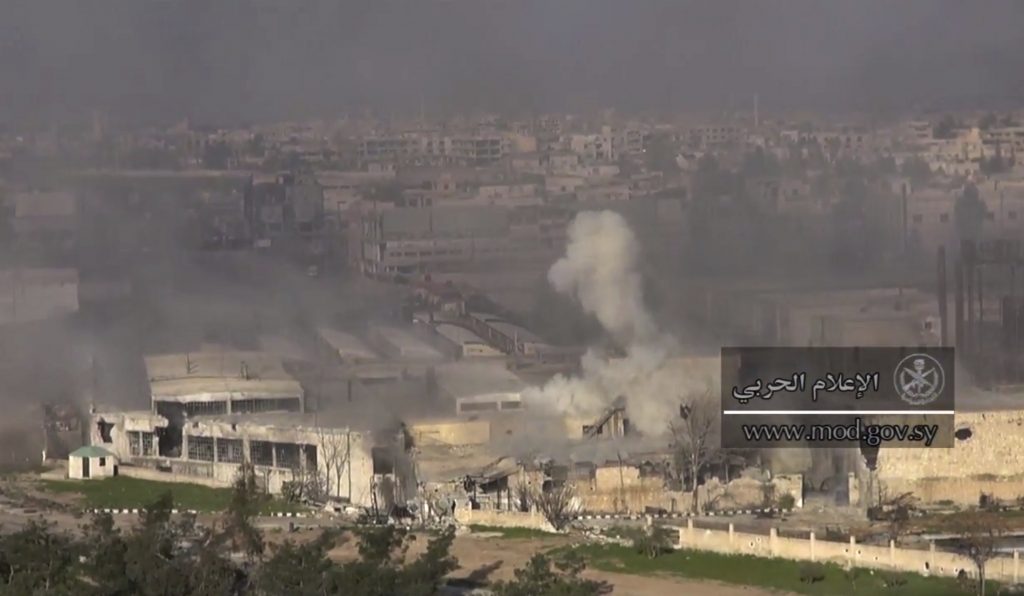 U.S. aircraft ferried Syrian Kurdish fighters and allied forces behind Islamic State lines in Syria Wednesday, to spearhead an assault on a strategic town belonging to the terrorist group outside its de facto capital, Raqqa, the Pentagon said.

The airlift was part of what Pentagon spokesman Eric Pohan described as a large, high-priority offensive to secure the area around Tabqa and the associated Tabqa Dam on the Euphrates River.

“This is a significant strategic target,” said Pohan. If successful, the operation would “basically cut ISIS off” from the western approaches to Raqqa.

The U.S.-backed, Kurdish-led Syrian Democratic Forces said their fighters seized four villages south of the Euphrates and cut the main artery between Raqqa and northwestern Syria.

The group said in a statement on social media that U.S. infantry were also airlifted into the area of operations. The Pentagon said U.S. military advisers were on the ground in the Tabqa area to help coordinate the operation, but said the airlift was for Syrian fighters only. It said no U.S. troops were involved in fighting on the front line.

Tabqa lies 28 miles west of Raqqa. The Islamic State terrorist group controls the town and a dam and military airfield nearby. It has a prison in the town where it holds high-profile hostages, as well as a training camp and headquarters.

Also Wednesday, the U.S.-led coalition against Islamic State said it was looking into reports that a U.S.-led coalition aircraft may have struck a shelter for the displaced in the village of Mansoura, also held by IS.
Syrian activists said Wednesday that dozens of people were killed or missing after an airstrike the day before leveled a school near the IS-held city of Raqqa, where displaced families had sought refuge.

The activist-run group Raqqa is Being Slaughtered Silently said some 50 families had been sheltering at the school in the northern Syrian village of Mansoura and that their fate was still unknown. Mansoura is 16 miles west of Raqqa and is under IS control.

The Britain-based Syrian Observatory for Human Rights said 33 bodies had been pulled from the rubble. The two organizations rely on local contacts to smuggle news out of Islamic State-held territory.

It was not immediately clear who carried out the airstrike. Syrian Kurdish forces have been advancing on Raqqa under the cover of U.S.-led coalition airstrikes and are now five miles north of the city. Syrian and Russian aircraft have also carried out strikes against the IS group.

Elsewhere in Syria, insurgents advanced on government-held towns and positions north of the central city of Hama. An al-Qaida-linked group spearheaded the assault, launched Tuesday, by detonating a car bomb in the nearby town of Souran.

The activist-run Hama Media Center said the rebels had reached the village of Khatab, six miles northwest of government-held Hama. State media reported fighting on the outskirts of the village and Souran.

The offensive coincides with a concentrated effort by opposition forces to breach government lines in the eastern neighborhoods of the capital, Damascus. That operation is also spearheaded by the al-Qaida-linked Levant Liberation Committee.

In Damascus, the insurgents were pinned down in industrial zones in the city’s east. Government airstrikes and artillery fire echoed through the capital, and smoke could be seen rising above the opposition-held Jobar neighborhood. Residents close to the front lines on the government side were seen leaving their buildings with whatever belongings they could pack in suitcases.

The uptick in fighting precedes the resumption of U.N.-mediated talks between the government and the opposition in Geneva, slated for Thursday.

U.N. Special Envoy to Syria Staffan de Mistura called the developments “alarming,” but said the invited delegations would be in attendance “with, I hope, serious intentions to follow up the political process.”

He spoke to reporters in Moscow, following a meeting with Russian Foreign Minister Sergei Lavrov.

Mr. Lavrov accused terrorists of carrying out more “terrorist attacks,” which he said were “aimed at disrupting or complicating the Geneva talks.”

Russia is a steadfast ally of Syrian President Bashar Assad.