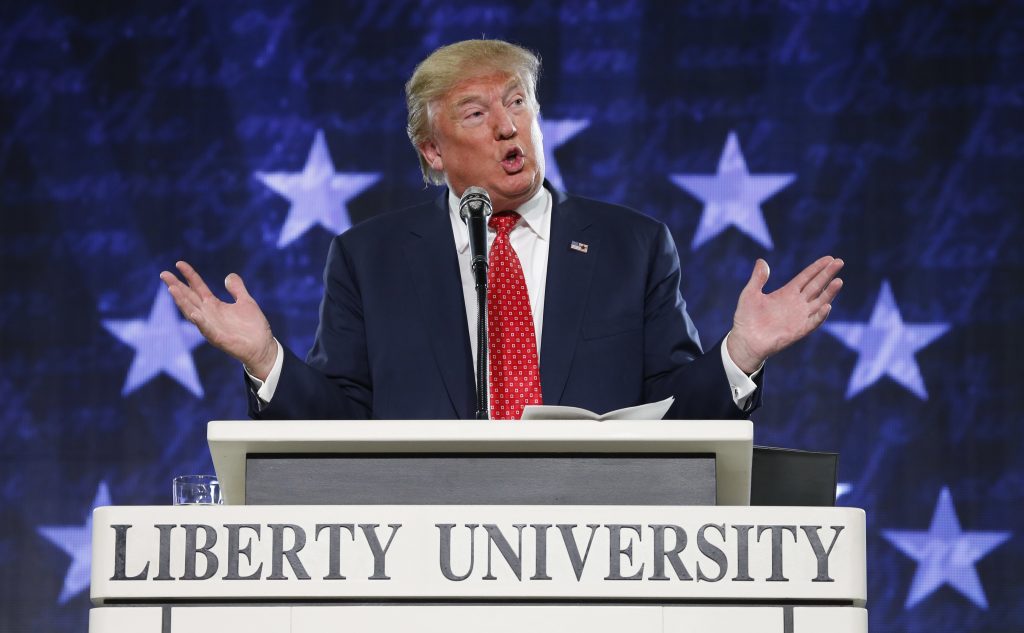 President Donald Trump will give his first commencement address as president at Liberty University, the evangelical college led by his prominent supporter Jerry Falwell Jr.

White House press secretary Sean Spicer confirmed to The Washington Post that Mr. Trump would give the address at Liberty, after the Christian Broadcasting Network first reported, based on an exclusive presidential interview, that Mr. Trump would be the commencement speaker.

Falwell, the son of the prominent televangelist, was one of Trump’s most vocal supporters among evangelical Protestant leaders during the 2016 presidential campaign. Even after inappropriate comments Mr. Trump made years ago came to light, causing some religious leaders to back away from supporting him the month before the election, Falwell went on the radio to defend Mr. Trump, saying the leak of that videotape might have been orchestrated by an establishment Republican conspiracy.

White evangelical voters picked Mr. Trump by a huge margin, 80 percent to 16 percent,- and Trump has frequently noted their support.

This will not be the first-time Mr. Trump has spoken at Liberty. He addressed the school’s convocation in 2012 and again in 2016 during his presidential campaign.

Since Falwell took over as president of the school his father founded, the university has expanded to about 80,000 students, including those who take classes online and those who study on the Lynchburg, Va., campus – which boasts such features as a snowless skiing facility and soon, a new gun range.

Earlier presidents have used commencement addresses on university campuses to not only congratulate the graduates on their degrees but also make policy pronouncements. The American Presidency Project has collected 160 such speeches, dating back to Woodrow Wilson’s 1914 address to the graduates of the U.S. Naval Academy. The only other president who has spoken at Liberty’s commencement, according to the database, is George H.W. Bush in 1990.

Four of the past six presidents have given commencement addresses in their first year in office at Notre Dame in Indiana. As hundreds of students voiced their opinions for and against inviting Mr. Trump this year in keeping with that tradition, the university invited Vice President Mike Pence, a former Indiana governor, instead. Pence accepted.

During the 2016 election campaign, former President Barack Obama used his commencement address at Rutgers University to denounce Mr. Trump’s proposed border wall and other platforms in his campaign. Obama delivered commencement speeches at 24 universities during his presidency, including Howard and the U.S. Air Force Academy.

At Liberty, student reaction to the announcement was mixed. Some were enthusiastic about the high-profile graduation speaker. One student, whose profile photo appears to show him aiming an AR-15 in front of a pickup truck, tweeted, “When you find out that Donald Trump is speaking at this year’s commencement ceremony! That’s how you know my school is better than yours.”

But others were frustrated that a president whose behavior they object to would be speaking on their big day. Some seniors tweeted jokingly about skipping graduation.

“It’s disappointing,” said Dustin Wahl, a junior who helped gather about 2,000 student signatures on an anti-Trump petition after the tape with the inappropriate comments came out in October. “I think a commencement speaker is supposed to be someone students can look up to and respect and aspire to be like one day. And I don’t think we live in a world right now where the president of the United States fits that criteria.”