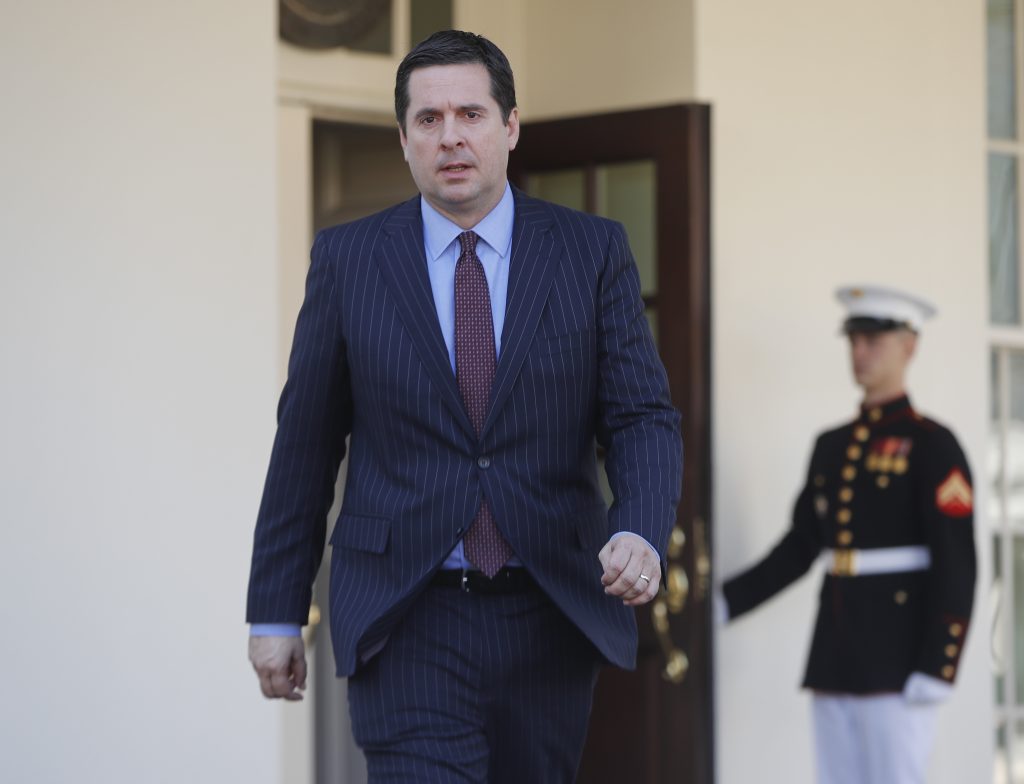 House Intelligence Committee Chair Devin Nunes went to the White House on Wednesday afternoon to personally brief President Donald Trump, about intelligence he says he has seen, regarding surveillance of foreign nationals – including possibly the president – during the presidential transition.

“The president needs to know these intelligence reports are out there,” Nunes added. “I think the president is concerned, and he should be.”

President Trump was asked if he felt vindicated after Nunes’ visit in his claims that he was wiretapped during the campaign at his Trump Tower headquarters by President Barack Obama’s administration. That claim has been roundly rejected by members of the intelligence community, including FBI Director James Comey and even Nunes himself, who again rejected the wiretapping allegation on Wednesday outside of the White House.

Before heading to the White House, Nunes said he briefed House Speaker Paul Ryan, R-Wis., on what he learned, and he also spoke with reporters. He stated that U.S. intelligence agencies may have picked up communications involving President Trump as part of court-approved surveillance of foreign intelligence targets in the period between Trump’s election and his inauguration.

Nunes, R-Calif., told reporters that Trump was one of various members of the Trump team whose communications probably were intercepted through “incidental collection,” or surveillance of the communications of foreign nationals, who may be in contact with or talking about U.S. citizens.

Nunes said the situation will be clarified after he receives a full list of American citizens who were “unmasked” during the surveillance. He said he expects to receive such information by Friday from the National Security Agency, the FBI and the CIA.

The House Intelligence Committee chairman made the statements two days after a public hearing of his panel on Monday where Comey publicly rejected Mr. Trump’s allegations that he had been wiretapped by Obama during the campaign.

Outside of the White House on Wednesday, Nunes confirmed his opinion that Mr. Trump was not wiretapped in the sense the president meant with his March 4 tweet.

But he did suggest Mr. Trump could have been caught up in incidental collection – or legal surveillance of the communications of foreign nationals who may be in contact with U.S. citizens. He signaled that the intelligence community may have, in his mind, included certain names in their reports that did not belong there.

“The reason that we do this, and that we have all these procedures in place, is to protect American citizens” Nunes said, adding that there is a “certain threshold met to make it into intelligence products.”

“Maybe they didn’t meet the minimum qualifications. There are things to me that don’t reach the level of intelligence value. You have to ask yourself why did they end up in intelligence reports.”

Nunes said the situation will be clarified after he receives a full list of American citizens who were “unmasked” during the surveillance. He said he expects to receive such information by Friday from the National Security Agency, the FBI and the CIA.

Nunes would not disclose his source, but said that he is confident that the information he received is official and from the intelligence community.

“From what I know right now, it looks like incidental collection,” Nunes said. “We don’t know exactly how that was picked up, but we’re trying to get to the bottom of it.”

He added that “it’s possible” that Mr. Trump’s personal communications were captured that way by the U.S. intelligence community.

Nunes stressed that he has no information that Russia had anything to do with the surveillance. The Intelligence panel – along with the FBI – is investigating Russia’s alleged interference in the 2016 presidential campaign and the suspected ties of Mr. Trump’s associates to the Kremlin.

White House press secretary Sean Spicer said that Nunes was headed to the White House on Wednesday afternoon to brief the president. Spicer said he did not know anything more about the matter than what Nunes had just said on Capitol Hill.

“He briefed the media before he briefed us,” Spicer said at his daily news briefing, adding, “Hopefully, we can share more” after the meeting.

It is not unusual for U.S. citizens to be caught up in the surveillance of foreign nationals by the intelligence community, and it does not mean that anything untoward occurred. Mr. Trump has alleged that President Barack Obama’s administration wiretapped Trump Tower during the presidential campaign. That charge was denied by FBI Director James Comey when he testified before the House Intelligence Committee on Monday.

Comey also stated that the FBI was investigating Russia’s alleged interference in the 2016 election and the suspected links of Mr. Trump’s associates to the Kremlin.

The intelligence chairman is the first high-ranking lawmaker to assert that intelligence agencies may have picked up conversations between Mr. Trump and foreign nationals. Nunes, who served on the Trump transition team, has focused more squarely in his rhetoric on leaks to the intelligence community about Russia’s alleged intent during the presidential campaign and communications between Trump aides and Russian officials. He has said the only “major crimes” he is aware of are the leaks to the news media on those topics.

At least one Trump adviser was caught up in the incidental collection. Michael T. Flynn was ousted as national security adviser after U.S. intelligence officials intercepted his communications with the Russian ambassador to the United States. The president dismissed him because Flynn misled Vice President Mike Pence about the content of those calls.