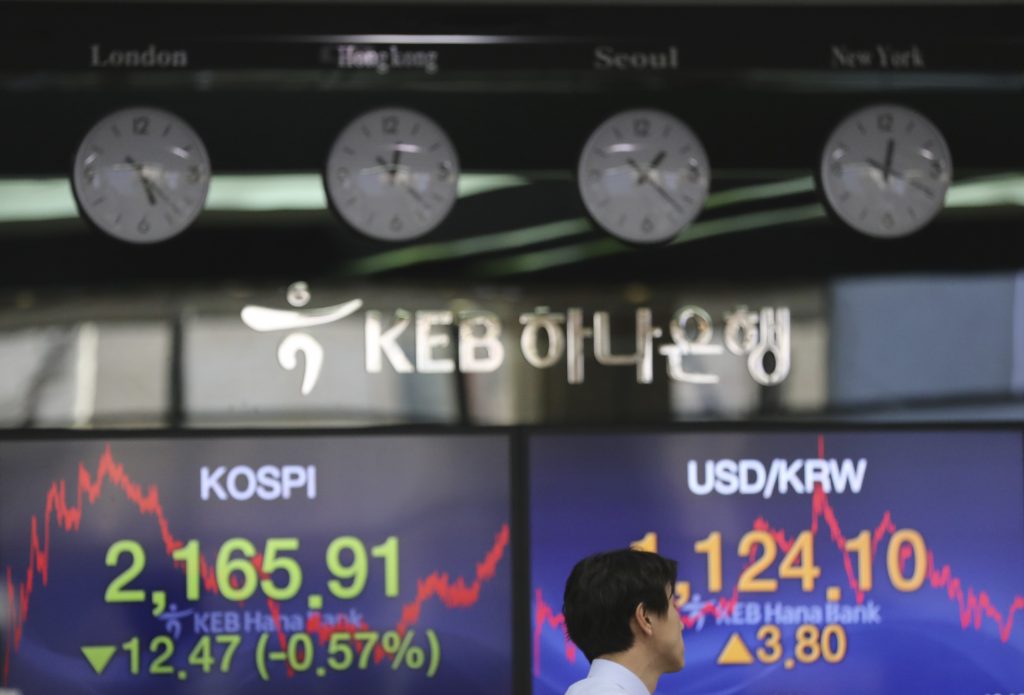 Equity markets across the region were a sea of red and the Australian dollar nursed heavy losses as funds took profits from a two-week-long rally, pushing a gauge of market volatility up to its highest levels this year.

Stock markets in Europe are set to take Asia’s cues and open lower with key index futures pointing down after U.S. stocks lost more than 1 percent in heavy trading.

“Asian stocks have had a good run so this is a good excuse to take some money off the table, though there is plenty of cash waiting on the sidelines to be invested if the selloff intensifies,” said Alex Wong, a fund manager at Ample Capital Ltd. in Hong Kong.

MSCI’s broadest index of Asia-Pacific shares outside Japan fell 1.4 percent, its biggest intraday percentage fall since Dec. 15. In the previous session, the index hit its highest level since June 2015.

Despite the tumble, some investors, such as Sherwood Zhang at Matthews Asia, part of a team that manages $26 billion in global assets, were optimistic about the outlook for Hong Kong stocks, citing relatively reasonable valuations.

With valuations stretched – U.S. stocks are trading at the upper end of their historical valuation ranges – investors see the Trump administration’s struggles to push through the healthcare overhaul as a sign he may also face setbacks delivering promised corporate tax cuts.

Expectations of those cuts have been a major driver behind the 10-percent surge in the S&P 500 since President Trump’s election and a subsequent rally in emerging markets since late December.

In a BofA Merrill Lynch survey conducted last week, 34 percent of investors found equities to be the most overvalued of all asset classes, the highest proportion in 17 years, with U.S. stocks identified as the most expensive.

“Investor positioning argues for a risk rally pause in March/April, with allocation to equities at a two-year high and bond allocation at a three-year low,” said Michael Hartnett, chief investment strategist at the bank.

“Policy is the key catalyst for the Icarus trade to fly higher in the coming months.”

With investor mood decidedly risk-off, the Japanese yen scored some chunky gains against the U.S. dollar, rising to a four-month high of 111.60. The greenback slipped below a key level of 100 against a trade-weighted basket of its peers.

“Unlike the dollar and Treasuries, the ‘Trump trade’ still had an impact on equities. But if such impact on equities is to fade, it would weigh on the dollar/yen. The dollar will also suffer against other currencies as U.S. yields would decline,” said Shin Kadota, senior strategist at Barclays in Tokyo.

Gold was on track to extend its overnight strong performance with the precious commodity perched comfortably at a two-week high of $1,245 per ounce.

Commodities other than gold, however, have had a rough outing with copper and iron ore prices down sharply with a spike in volatility flushing out a lot of speculative positions.

Oil prices declined as concerns about new supply overshadowed the latest talk by OPEC that it was looking to extend output cuts.