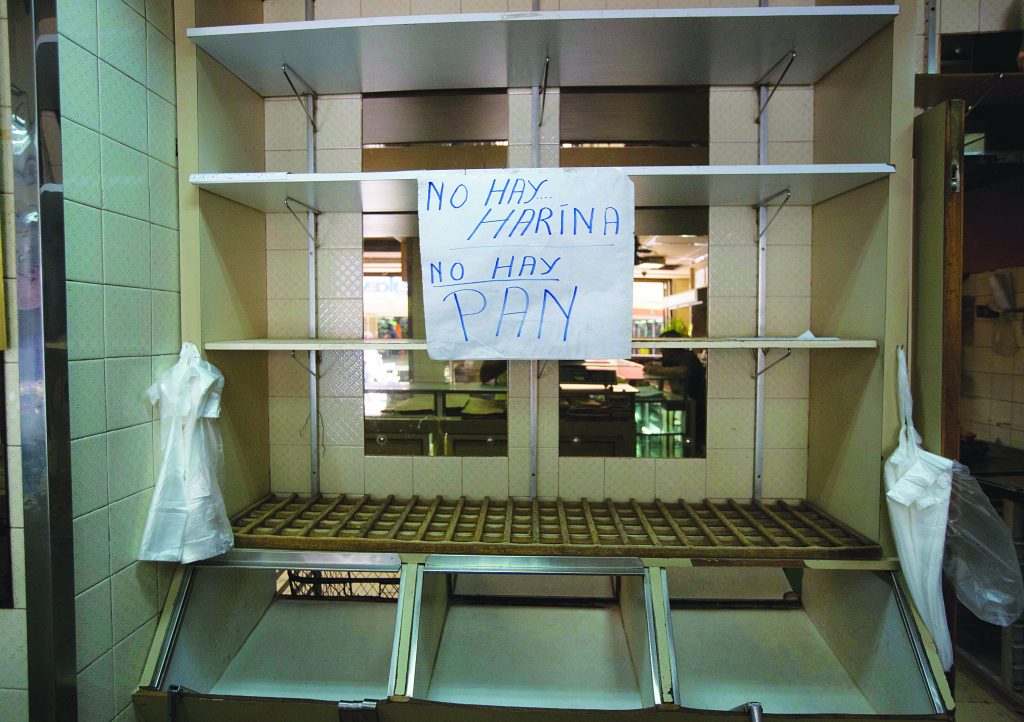 For the past 25 years, after he immigrated penniless to Venezuela from Portugal, Eduardo Dos Santos has personally taken care of the loyal clients at Mansion’s Bakery.

But now the downtown Caracas corner store is in the hands of die-hard socialists, and Dos Santos is at least temporarily out of a job, as a result of the latest attempt by the government to reduce the sprawling food lines that have become the symbol of Venezuela’s descent into economic chaos.

With cameras rolling, agents from the National Superintendent of Fair Prices raided Mansion’s last week and accused the owners of hoarding scarce sacks of government-imported flour, saying the subsidized goods should have been used to make price-regulated loaves but instead was turned into more expensive croissants and sweet rolls.

The government said it was taking over the shop for 90 days, turning control over to a pro-government neighborhood committee given the task of distributing bags of staples door to door.

“This group of scoundrels arrived and kicked me out,” the 52-year-old Dos Santos said, adding that he feared for his life due to the violent way he was expelled from the store where he started off as a lowly sales clerk and which he now manages. “One grabbed the store’s keys from me and said ‘Get out of here.’”

Within hours of the takeover, new young, dreadlocked and tattooed shopkeepers took down the Mansion’s Bakery sign outside and hung up photos of President Nicolas Maduro, the late leader Hugo Chavez and South American independence hero Simon Bolivar. Many of them danced behind the counters to salsa music.

The only thing missing was the bread, at least when The Associated Press visited the newly renamed “Minka” bakery Friday afternoon, when the day’s supply had already run out.

“What the government is doing doesn’t solve the problems,” said Milagros Cabrera, a 57-year-old retiree who for more than 20 years has been visiting the bakery just two blocks from the presidential palace. Now she said she has to walk several miles from her home to pick her daily “canilla,” a fast-fermenting, savory baguette introduced by European bread-makers at the height of Venezuela’s mid-20th century immigrant boom that has become a beloved staple of the local diet.

The goal of what Maduro has taken to calling the “bread war” is to enforce price controls that have become increasingly unwieldy amid triple-digit inflation and widespread shortages. As part of spot checks targeting some 700 bakeries, authorities even announced the arrest of two people for illegally making brownies.

To earn a profit amid spiraling costs, many business owners try to reduce to a minimum what they sell under a 2014 decree setting prices for many basic goods.

The difference in margins can be huge. While a loaf of canilla sells for 250 bolivars — about 28 cents at the lowest official rate and less than a dime on the black market — unregulated specialty products can fetch 10 times that amount. The same dynamic has been driving sales of fancy yogurts and precooked rice instead of fresh milk and regular rice.

Such prices are out of reach for most Venezuelans.

The most recent survey on living standards by three major universities found that 93 percent of Venezuelans at the end of last year said they didn’t have enough money to buy food, making do instead by skipping meals and eating less. The opposition-controlled National Assembly last week passed a resolution declaring a “humanitarian crisis” and creating a commission to investigate government mismanagement of food imports.

To boost food supplies, Vice President Tareck El Aissami last week ordered the nation’s bakeries to use 90 percent of their flour to produce canilla and French bread. He also ordered every bakery to have bread available for sale by 7 a.m. Owners who refuse will suffer a similar fate to Mansion’s, he said.

“We’re going to distribute bread at a much cheaper price and in larger quantities than before,” said Jose Enrique Solorzano, who heads the socialist committee that assumed control of Mansion’s. “It’s no longer going to be about the exploited and exploiter, no more boss and chief. We’re all going to become productive, living and producing in equality.”

Economists doubt the tough tactics will work. Most blame the problems on price controls that have spread across industries since they were introduced by Chavez more than a decade ago to combat opposition-owned businesses that supported a national strike trying to force him from office.

The government has a monopoly on the importation of most food. But as oil revenues have collapsed, baking industry representatives say they are bringing in only about a quarter of the 120,000 metric tons of wheat a month that the country’s 10,000 bakeries need to satisfy demand.

While the price of a 45-kilogram (100-pound) sack of flour is set at 18,000 bolivars, bakers say they frequently have to buy supplies illegally at five times that amount from black-market middlemen working for military generals who oversee food imports.

“Seeing all this makes me want to cry,” Antonio Medina, a 77-year-old retiree born in Spain, said as he stared at the last few remaining cookies in the almost-empty display cases at a bakery in eastern Caracas where he has shopped the past four decades.

“I want to eat a sweet roll but there aren’t any and what products exist are too expensive,” he said. “I guess I’ll have to settle for a coffee.”