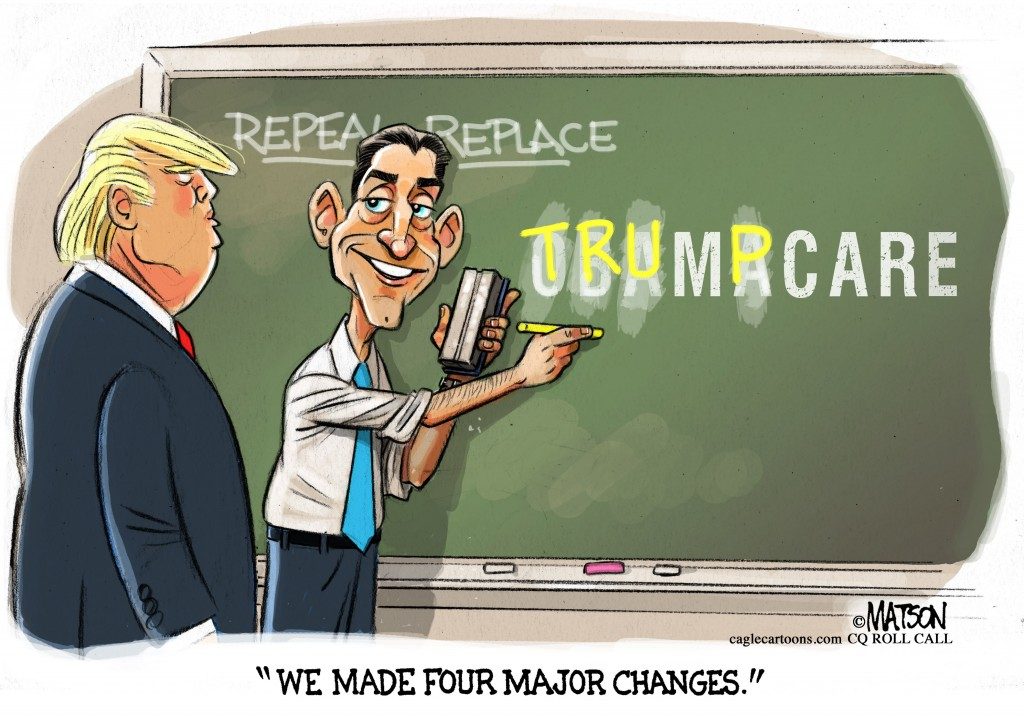 The L-rd giveth and the L-rd taketh away, but for governments it’s not that easy. Once something is given — say, health insurance coverage to 20 million Americans — you take it away at your peril. This is true for any government benefit, but especially for health care. There’s a reason not one Western democracy with some system of national health care has ever abolished it.

The genius of the left is to keep enlarging the entitlement state by creating new giveaways that are politically impossible to repeal. For 20 years, Republicans railed against the New Deal. Yet, when they came back into office in 1953, Eisenhower didn’t just keep Social Security, he expanded it.

People hated Obamacare for its highhandedness, incompetence and cost. At the same time, its crafters took great care to create new beneficiaries and new expectations. Which makes repeal very complicated.

The Congressional Budget Office projects that, under Paul Ryan’s Obamacare replacement bill, 24 million will lose insurance within 10 years, 14 million after the first year.

Granted, the number is highly suspect. CBO projects 18 million covered by the Obamacare exchanges in 2018. But the number today is about 10 million. That means the CBO estimate of those losing coverage is already about 8 million too high.

Nonetheless, there will be losers. And their stories will be plastered wall to wall across the media as sure as night follows day.

That scares GOP moderates. And yet the main resistance to Ryan comes from conservative members complaining that the bill is not ideologically pure enough. They mock it as Obamacare Lite.

For example, Ryan wants to ease the pain by phasing out Medicaid expansion through 2020. The conservative Republican Study Committee wants it done next year. This is crazy. For the sake of two year’s savings, why would you risk a political crash landing?

Moreover, the idea that you can eradicate Obamacare root and branch is fanciful. For all its catastrophic flaws, Obamacare changed expectations. Does any Republican propose returning to a time when you can be denied health insurance because of a pre-existing condition?

It’s not just Donald Trump who ran on retaining this new, yes, entitlement. Everyone did. But it’s very problematic. If people know that they can sign up for insurance after they get sick, the very idea of insurance is undermined. People won’t sign up when healthy and the insurance companies will go broke.

So what do you do? Obamacare imposed a monetary fine if you didn’t sign up, for which the Ryan bill substitutes another mechanism, less heavy-handed but still government-mandated.

The purists who insist upon entirely escaping the heavy hand of government are dreaming. The best you can hope for is to make it less intrusive and more rational, as in the Ryan plan’s block-granting Medicaid.

Or instituting a more realistic age-rating system. Sixty-year-olds use six times as much health care as 20-year-olds, yet Obamacare decreed, entirely arbitrarily, that the former could be charged insurance premiums no more than three times that of the latter. The GOP bill changes the ratio from 3-to-1 to 5-to-1.

Premiums better reflecting risk constitute a major restoration of rationality. (It’s how life insurance works.) Under Obamacare, the young were unwilling to be swindled and refused to sign up. Without their support, the whole system is thus headed into a death spiral of looming insolvency.

Rationality, however, has a price. The CBO has already predicted a massive increase in premiums for 60-year-olds. That’s the headline.

There is no free lunch. GOP hard-liners must accept that Americans have become accustomed to some new health-care benefits, just as moderates have to brace themselves for stories about the inevitable losers in any reform. That’s the political price for fulfilling the seven-year promise of repealing and replacing Obamacare.

Unless, of course, you go the full Machiavelli and throw it all back on the Democrats. How? Republicans could forget about meeting the arcane requirements of “reconciliation” legislation (which requires only 51 votes in the Senate) and send the Senate a replacement bill loaded up with everything conservative — including tort reform and insurance competition across state lines. That would require 60 Senate votes. Let the Democrats filibuster it to death — and take the blame when repeal-and-replace fails, Obamacare carries on and then collapses under its own weight.

Upside: You reap the backlash. Downside: You have to live with your conscience.