U.S. stocks took their biggest loss in five months Tuesday as a health care bill backed by President Donald Trump ran into trouble in Congress, which raised some questions about his agenda of faster economic growth spurred on by lower taxes and cuts in regulations.

Banks plunged as bond yields continued to fall, which will mean lower interest rates on loans. Transportation companies including airlines, railroads and rental car companies dropped, and so did materials companies like steel and chemicals makers. The dollar weakened. Small-company stocks, which stand to benefit the most from Trump’s policy proposals of lower taxes and looser regulations, fell more than the rest of the market.

“President Trump promised that this health care bill would be signed, sealed, delivered within the first couple of weeks of him taking office,” said Jack Ablin, chief investment officer for BMO Capital Markets. “All this is doing is pushing the rest of the agenda out.”

Stocks have fallen for four days in a row, though the previous losses were small. Tuesday’s losses were a reversal of the patterns that have endured since Trump was elected in November, but overall stocks are still sharply higher since then.

On Thursday the House of Representatives is scheduled to vote on the Republican-backed American Health Care Act, and despite support from the president on Tuesday, it’s not clear if the House or the Senate will approve the bill. The administration hopes to get a major tax reform package to Congress by August, and a big infrastructure spending proposal may follow next year. 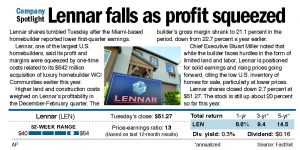 The price of copper also dropped. The metal’s price tends to rise when investors are more optimistic about the economy, and copper has risen 14 percent over the last year. It sank 5 cents, or 1.8 percent, to $2.62 a pound on Tuesday.

Kate Warne, an investment strategist for Edward Jones, said investors are taking some profits after the market’s long post-election winning streak, but noted that Wall Street is especially eager for the administration’s tax reform proposals.

Food companies fell after General Mills posted a better-than-expected profit but weaker sales. The Cheerios maker faces more competitive pricing and a market that has been shifting demand from processed foods. Its stock dipped 50 cents to $59.76, and Kellogg shed $1.38, or 1.8 percent, to $73.60. Campbell Soup gave up $1.91 or 3.2 percent, to $57.09.

The DAX of Germany fell 1.1 percent and the British FTSE 100 lost 0.6 percent. France’s CAC 40 made big early gains after a debate between the nation’s candidates for president, but it finished 0.5 percent lower. Japan’s benchmark Nikkei 225 slipped 0.3 percent. The Kospi in South Korea rose 1 percent and in Hong Kong the Hang Seng rose 0.4 percent.