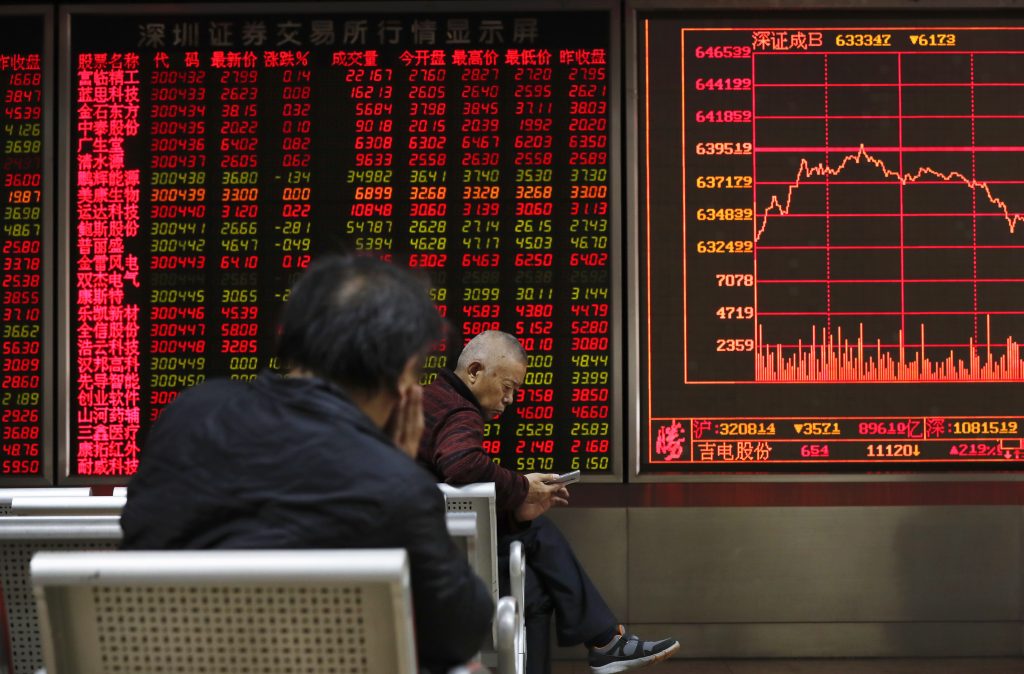 Asian shares hit 21-month highs on Tuesday while the dollar and U.S. bond yields were on the backfoot on the prospect of a less hawkish than previously expected Federal Reserve policy trajectory.

European shares are expected to open slightly higher, with spread-betters seeing a rise of up to 0.1 percent in Britain’s FTSE, Germany’s DAX and France’s CAC.

Japan’s Nikkei dropped 0.3 percent, weighed by financial stocks, which were hurt by lower U.S. yields and exporter stocks, which fell on the yen’s gains against the dollar.

While Asian shares have been supported by signs of strong global economic growth, concerns about protectionism cast a shadow after financial leaders of the world’s biggest economies dropped a pledge to keep global trade free and open, acquiescing to an increasingly protectionist United States.

“Any fiscal spending by the Trump administration will not come until August at earliest and probably much later. So any economic benefit of that will show up only next year,” said a senior trader at a European bank.

“So the markets are gradually pricing that in, winding back their initial rally after the elections.”

Although President Trump promised in early February to deliver a “phenomenal” tax plan within a few weeks, no such details have been released yet, with many investors now waiting for detailed budget plan expected in mid-May.

In addition, sentiment was hurt after FBI Director James Comey confirmed for the first time that the bureau is investigating possible ties between President Trump’s campaign and Russia.

“U.S. stocks valuations are getting really expensive, so I expect the market to be capped for now. That also means Japanese shares are unlikely to gain further,” said Tatsushi Maeno, senior strategist at Okasan Asset Management.

Expectations that the Federal Reserve will have to step up rate hikes to counter inflationary pressure from President Trump’s stimulus are also waning after the Fed dropped no hints of an acceleration in credit tightening last week.

Chicago Federal Reserve President Charles Evans, in one of the first official comments after the Fed raised rates as expected last week, reiterated that message on Monday.

He said that two more interest rate hikes this year were likely, disappointing investors who had anticipated rates to be increased more quickly. Evans’s comments helped to bring down the 10-year U.S. Treasuries yield to 2.461 percent, its lowest level in two weeks. It last stood at 2.479 percent.

The euro ticked up to $1.0758, near Friday’s six-week high of $1.07825, maintaining its gains made last week after a election defeat for Dutch far-right leader Geert Wilders, which eased broader fears of a populist drift in European politics.

In France, centrist Emmanuel Macron solidified his status as front-runner in the presidential election in a televised debate on Monday.

“At the moment, worries about the election have subsided a bit after the Dutch elections. But I expect the market to become more nervous near the election, given last year’s experiences (with Brexit and the U.S. elections),” said Kazushige Kaida, head of foreign exchange at State Street.

The dollar’s index against a basket of six major currencies stood at 100.24, after hitting a six-week low of 100.02 on Monday.

The specter of slower U.S. rate hikes has been helping high-yielding currencies.

The South African rand has gained 4.0 percent since then to a near 1½-year high while the Brazilian real rose 3.2 percent.

Oil prices rose in Asia on expectations that an OPEC-led production cut to prop up the market could be extended. Prices for front-month Brent crude futures, the international benchmark for oil, gained 0.4 percent to $51.84 per barrel.

OPEC members increasingly favor extending the output curb beyond June to balance the market, sources within the group said, although they added that this would require non-OPEC members such as Russia to also step up their efforts.