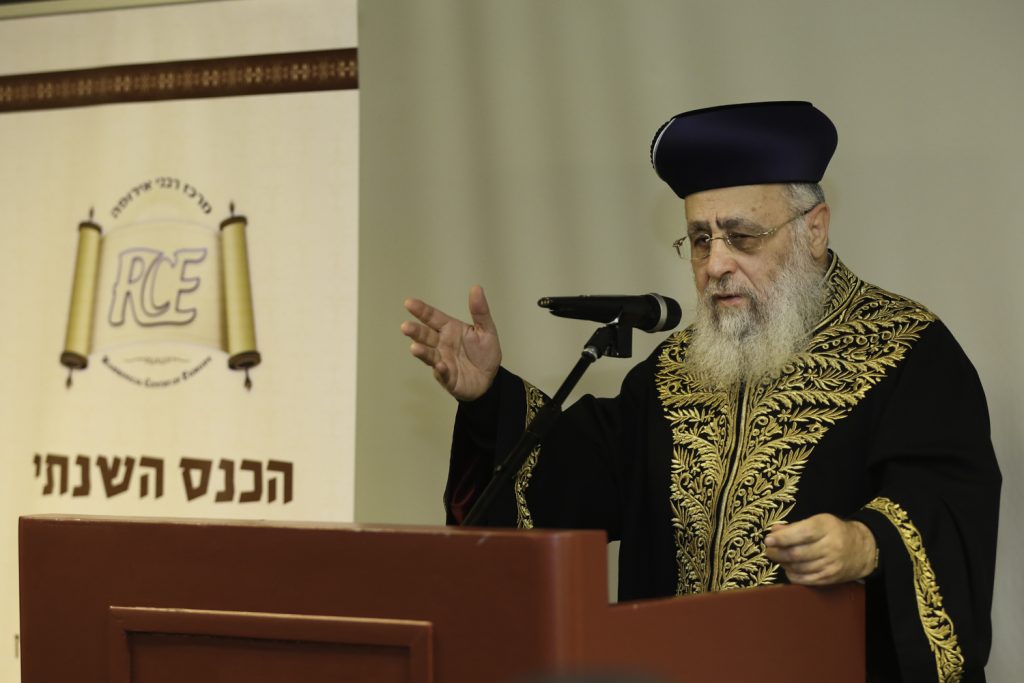 More than 200 Rabbanim from across Europe arrived in the town of Pomezia, Italy, on Monday for the annual conference of the Rabbinical Center of Europe. This is the 16th annual conference, which is held in a different European country each year.

A range of issues of importance to European Jewry will be discussed at the conference, which lasts through Wednesday night. Any issues that remain unresolved will continue to be addressed by the Rabbanim who serve on the presidium of the Center, and decisions are expected to be rendered in the coming months.

The rise of extreme right-wing factions and influential figures in Europe is of deep concern to Jewish community leaders. Issues such as personal security, protective measures for communal buildings and shuls, and the preservation of Jewish life in European communities are among the central issues on the agenda. As a result, various halachic questions have arisen, to be discussed at the three-day conference.

The conference was opened on Monday by Rabbi Aryeh Goldberg, deputy director of the RCE, who noted that the Center had held a survey among hundreds of Rabbanim in Europe to determine which subjects would be discussed at the gathering. Issues of halachah and current events were of most concern to the Rabbanim; hence those were the focal topics of discussion.

Harav Yitzchak Chazan, one of the community Rabbanim and the Chabad shaliach in Rome for the past 40 years, addressed the Rabbanim about the development of the Jewish community there. He also spoke about the challenges that the community faces with assimilation, the younger generation of Jews, and preservation of a vibrant communal life. He described the range of situations he encounters and the solutions he has come up with. His words were met with great interest by the other Rabbanim because of his extensive experience and because of the unique structure of the community in Rome.

Harav Yehudah Breitkopf, Av Beis Din for the diaspora on behalf of the Chief Rabbinate of Israel, spoke about conversion according to halachah in the diaspora, an issue that is of foremost concern to Rabbanim in Europe. The auditorium was packed with Rabbanim who sat attentively with pen and paper and wrote down the piskei halachah and the examples that Rav Breitkopf gave, and as he conveyed what he had heard from Gedolei Yisrael throughout the many years he has been in the field.

Among other things he disclosed, he said that in order to guarantee that a righteous convert will continue to maintain a Jewish lifestyle, he asked community Rabbanim to withhold certificates of conversion from converts for one year after the conversion. This is to guarantee that, indeed, that person is maintaining a Jewish lifestyle and is careful to observe mitzvos.

He shared a story about a bachur who learned in Ponovez and was among the top boys there. One day the Roshei Yeshivah found out that he was halachically not Jewish.

They offered to help the bachur to convert. To their shock he refused, preferring to leave the yeshivah. He explained that he was not interested in keeping all 613 mitzvos.

The Rishon Letzion, Harav Yitzchak Yosef, opened his lecture on the subject of amirah l’nachri, Shabbos and technology, with a story that took place in Bnei Brak: “On one of the Shabbosim that I spent in Bnei Brak, while walking down the street, I noticed a great tumult. I was told that nearby there lived a disabled IDF veteran to whom the Ministry of Defense had given a trained monkey to help him with his needs, turning his lights on, opening doors for him, etc.

“On that Shabbos, someone had angered the monkey and it fled from the house into the street, and began jumping between the rooftops and trees of the Ramat Elchanan neighborhood. A great uproar ensued, the children had a field day, and the disabled man, who was a Sephardi, was seeking help.

“While I continued on my way, I met Rav Yitzchak Zilberstein, the Rav of Ramat Elchanan, and we began a halachic discussion on the subject. Rav Zilberstein said that since the Sephardim are very stringent about amirah l’nachri, and the owner of the monkey is Sephardi, it seems he should be prohibited from seeking help. On the other hand, if he was Ashkenazi, he could ask for help in returning the monkey.

“In the end, someone brought some beets, and the monkey — that likes beets — wished to eat them, and in this manner they led the monkey back to the home of the disabled individual and closed the door.”

Harav Avraham Moshe Halperin, one of the leading Rabbanim of the Institute of Science and Technology According to Halachah and Av Beis Din of Badatz Ungvar, spoke about the use of home electronic devices on Shabbos according to halachah. Displaying his expertise in many areas of technology, he detailed to the Rabbanim how someone who is not an expert in modern technology may transgress issurei d’Oraisa on Shabbos when performing routine activities, among them opening a faucet (by triggering the operation of water pumps in multi-story buildings) or using an air conditioner or home heating system. The Rabbanim — who themselves are experts in hilchos Shabbos — looked surprised in several cases when he detailed how various technologies work, and some of his remarks generated vigorous debate. At their request, Rav Halperin agreed to speak on the subject on subsequent days of the conference.

Renowned orator Rabbi Mordechai Dovid Neugroschel fascinated the Rabbanim with his speech on the battle against assimilation, and on how to explain various subjects in Judaism. He analyzed various situations that community Rabbanim presented him with, and explained how they could respond in a way that will attract both younger and older people to take a further interest in Judaism and understand the true significance of a Jewish life.

Rabbi Menachem Margolin, director of the RCE, said, “There is no doubt that European Judaism will yield blessed fruits as the result of this conference.”