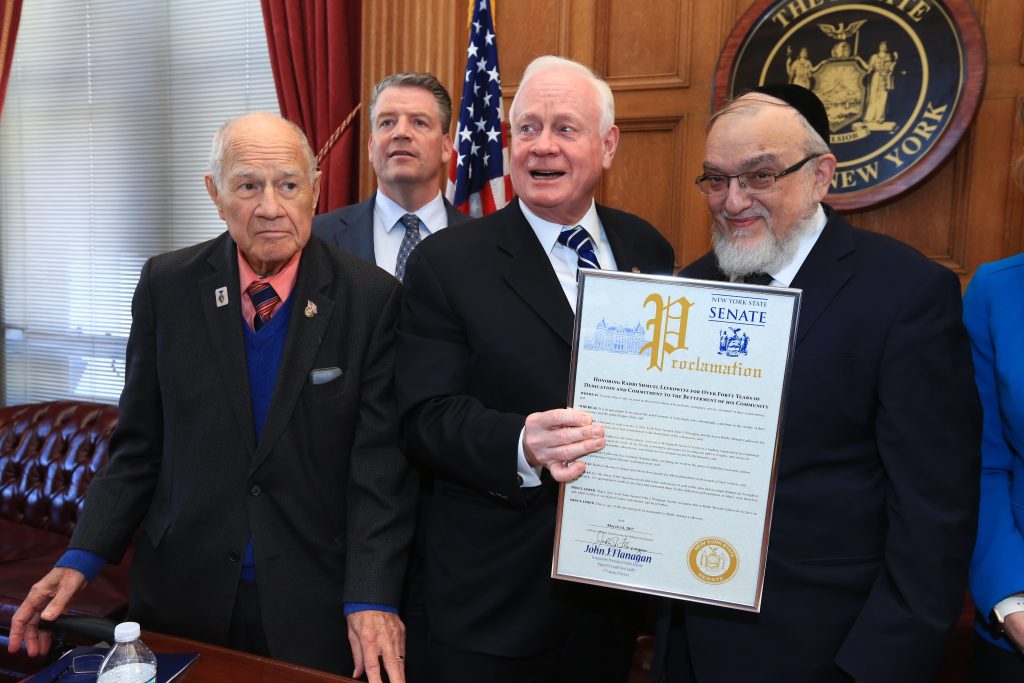 A push for a direct tax credit to tuition-paying parents, and funding for security at Jewish institutions topped the agenda Monday of Agudath Israel of America’s mission to New York’s capital.

More than four dozen yeshivah administrators and Orthodox activists trekked to Albany for the annual event lobbying for the community. We met with Gov. Andrew Cuomo’s top staff and leaders of the two legislative chambers.

At the top of the list of priorities was a tuition-aid proposal. While in the past Agudah supported a tax credit for donations to scholarship funds, this year they are throwing their clout behind a new plan to provide a direct tax credit to parents who send to private schools.

Assembly Speaker Carl Heastie came to the meeting but didn’t stay for the speeches. Senate Majority Leader John Flanagan was unable to meet with the group; he was attending the funeral of the father of his predecessor, Dean Skelos. Upon his return to Albany later in the day, the majority leader met with a group of Agudah mission participants. They discussed the tuition tax credit, urging Flanagan to include the tuition aid in the final budget negotiations.

Yoel Rosenfeld, the government relations liaison for Bobov, was one of those presenting the case for increased funding in separate meetings with top officials in the Assembly and Senate.

“The progressive argument for helping illegal immigrants with tuition is that while they broke the law, they are here now and are part of society,” Rosenfeld told Hamodia. “Well, we are the same — you may not be allowed to fund yeshivos because of the Blaine Amendment, but we are here and are part of society. We should look for innovative ways to help parents with tuition.”

The Senate has already voted for a bill to grant a $600 credit for parents of private school children, with an income cap of $200,000. The money would be available whether the parents pay taxes or not.

Cuomo had indicated his support for the bill in previous years. A member of his administration told Hamodia earlier this year that he intends to push it after the budget passes at the end of the month.

The biggest obstacle to the bill’s passage is in the Assembly, which is controlled by Democrats. However, some Democrats have in recent years backed the direct tax credit form of aid. Activists are not as hopeful this year for it as they were previously.

“There is no chance of it passing this year,” said Assemblywoman Amy Paulin, a Democrat from Westchester.

But the participants presented their case, providing an item-by-item repudiation of the arguments against tuition aid. The matter was personalized by addresses by the next generation — Agudah activists Leon Goldenberg’s granddaughter and Chaskel Bennett’s daughter described how yeshivah education helped them.

“People are always pushing things off for tomorrow,” Rabbi Shmuel Lefkowitz, Agudah’s vice president for community affairs, told the Senate leadership at a noontime meeting. “If it doesn’t get done in 2017, then when?”

Sen. Martin Golden (R-Brooklyn) observed that under GOP leadership the state has recognized the contributions of yeshivos and adjusted their budgets accordingly. He assured the group that Flanagan is committed to do that this year as well.

“I do believe that you are right — if not now, when?” he said to cheers.

Golden capped off the meeting by presenting Rabbi Lefkowitz with a proclamation honoring his decades of service to the community.

“Rabbi Sherer would say,” stated Rabbi Lefkowitz, referring to the legendary late Agudah leader, “that when you begin talking about what you’ve done and not what still has to be done, then you’re dead. We’ve accomplished a lot, but the main thing is, what’s going to be with the tuition tax credit?”

Three other issues brought up during four hours of meetings with lawmakers were security funds for Jewish schools and centers, a debt of about $20 million for yeshivos’ taking attendance, and a raise in the amount of money paid for requiring immunization.

With the first of these issues having been pushed to the fore during a period of increased threats to Jewish centers around the country, Cuomo announced earlier this month that he will propose an extra $25 million security grant. The Senate included $35 million in their budget proposal. Mission participants broached the subject with Heastie, and later with Assembly members at a luncheon hosted by the Agudah mission.

The second item has to do with the state’s paying yeshivos to take attendance to prevent truancy under the Comprehensive Attendance Program. The state’s debt grew in recent years over disagreements over the formula and is estimated currently at $20 million. Agudah lobbied to have it all paid up.

Third on the above agenda was the amount of money paid to yeshivos to enforce the state mandate that all students be immunized. The current sum of 60 cents a student, set back in 1984, is woefully little compared to the cost of sending letters and making calls to parents, Rosenfeld told the lawmakers. Rabbi Yeruchim Silber, Agudah’s director of New York government affairs, said that the sum of $25 per student best reflects the costs to yeshivos. The Senate bill would provide $17.

“This has to be realistic,” Rabbi Silber said.