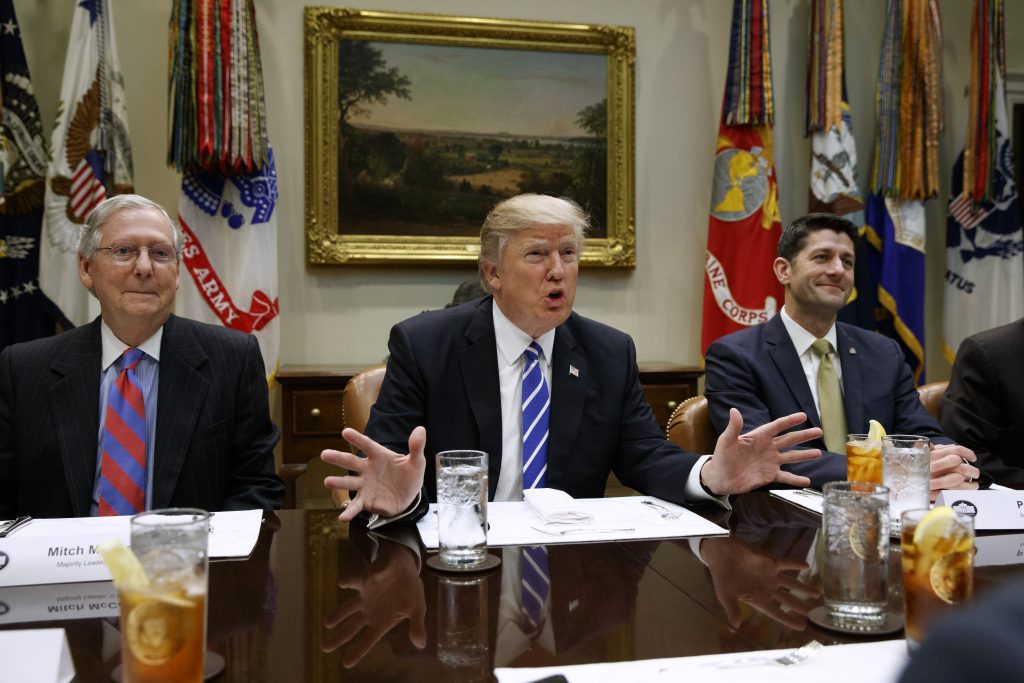 President Donald Trump will come to Capitol Hill on Tuesday morning to address a private meeting of House Republicans in a bid to secure passage of the GOP’s health-care overhaul later in the week.

Trump’s visit to the party gathering, confirmed by two GOP aides, comes as House Speaker Paul Ryan, R-Wis., and other Republican leaders put the finishing touches on the American Health Care Act — legislation that would fulfill a Trump campaign promise by undoing major parts of the Affordable Care Act.

Ryan and other GOP leaders intend to introduce changes to the current legislation as soon as Monday, one aide said, that they believe will ultimately win a House majority.

Trump’s visit to the Hill signals that GOP leaders and the president consider negotiations with key blocs of House members essentially complete. They hope to put the bill on the House floor by Thursday and then send it on to the Senate.

Ryan will now embark on an effort to persuade individual members to vote for the package, and there is no bigger point of leverage than Trump himself.

“The president is bringing people to his table, and I’m very impressed with how the president is helping us close this bill, and making the improvements that we’ve been making, getting the votes,” Ryan said in a Fox News interview Sunday. “We are right where we want to be.”

But hardline conservatives are continuing to oppose the GOP bill, arguing it does not do nearly enough to reverse the ACA and lower the price of health insurance coverage.

“While I’ve been in Congress, I can’t recall a more universally detested piece of legislation than this GOP health-care bill,” Rep. Justin Amash, R-Mich., tweeted Monday. Amash is a member of the House Freedom Caucus, a hardline faction of several dozen GOP members who have negotiated directly with White House officials to force changes to the bill.

The House hardliners have been emboldened by several conservative Republican senators who also want major changes to the legislation.

Sen. Rand Paul, R-Ky., who has worked closely with the hard-right bloc in the House, said Sunday on ABC that Freedom Caucus members “still believe that the conservatives in their caucus don’t want Obamacare Lite” and that the bill remained short of a majority.

“I believe that the real negotiation begins when we stop them,” he said, referring to Ryan and House GOP leaders. “You have to stop them.”

Paul noted that he passed out passages from Trump’s book at a meeting he had with Freedom Caucus members last week. “We need to learn from the master, and let’s make sure that we increase our leverage by holding the line.”

But Ryan expressed confidence that the bill would pass the House this week — and then move to the Senate, where the legislation is facing even sharper doubts and the GOP majority is much narrower. He cited Trump’s hands-on involvement as a key factor in moving the legislation forward.

Trump’s visit Tuesday will be his first appearance at the weekly House Republican Conference meeting since becoming president. He last privately addressed Republican lawmakers as a group at the party’s policy retreat in Philadelphia in late January and has met with small groups of members on several occasions since.

Trump won the backing of several conservative House members on Friday when he agreed to make changes to the Medicaid portion of the bill, including giving states the option of instituting a work requirement on childless, able-bodied adults who receive the benefit.

Those changes are expected to be included in the leadership-backed amendments that will be incorporated into the bill before it comes to a final vote. Ryan also said Sunday that it will likely be changed to give older Americans more assistance to buy insurance.

A Congressional Budget Office analysis forecast a short-term increase in premiums under the GOP law, and said that premiums are expected to be 10 percent lower over the next 10 years than they would be if the ACA remained in place. But some older and low-income people would face massive premium hikes.

Ryan has disputed that analysis, suggesting that administrative actions taken by the Trump administration would further lower premiums and questioning whether the ACA would remain viable in a decade. But he acknowledged on NBC Sunday that the GOP bill would probably have to change.

“We believe we should have even more assistance, and that’s one of the things we’re looking at for that person in the 50s and 60s because they experience higher health-care costs,” he said.

Ryan’s declaration came after a third House moderate said Saturday that he could not support the bill “in its current form.”

Rep. Brian Fitzpatrick, R-Pa., who represents a suburban Philadelphia district that has been heavily targeted by Democrats, said in a social-media post that he was most concerned that the legislation would roll back efforts to prevent and treat opioid abuse.

But he said that was one concern of many, and lawmakers from across the GOP’s ideological spectrum have expressed fears that the American Health Care Act will not drive down prices. Reps. Ileana Ros-Lehtinen, R-Fla., and Leonard Lance, R-N.J., have cited that concern in announcing their opposition to the bill, and several other moderates remain undecided.

The hard right, however, remain the most vocal internal critics of the GOP bill, and the White House has undertaken a major effort to win their support.

Sen. Ted Cruz, R-Texas, said Sunday that Trump administration officials negotiated with him and other conservative leaders through the weekend at the Mar-a-Lago resort in Florida on even more dramatic revisions to the bill.

“I cannot vote for any bill that keeps premiums rising,” Cruz said, echoing the concerns of other hardline lawmakers who want the legislation to undo more of the Affordable Care Act’s insurance mandates, adding: “President Trump said this is one big, fat negotiation.”

Cruz attended the Florida meeting along with two other conservative leaders, Sen. Mike Lee, R-Utah, and Rep. Mark Meadows, R-N.C., the Freedom Caucus chairman. According to two people who spoke on the condition of anonymity to candidly describe the meeting, the three men met with Vice President Mike Pence and several other administration officials.

But they did not meet with Trump himself, which one person called an indication that the president considers the health-care legislation settled.