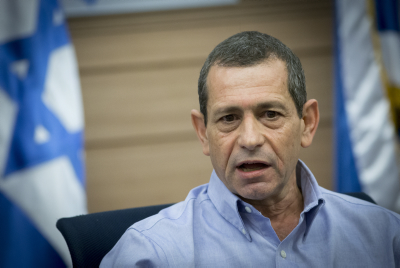 Israelis should not be fooled by the current relative period of security “quiet,” Shin Bet head Nadav Argaman said at a meeting of the Knesset Foreign Affairs and Defense Committee Monday. While Israel had dealt very effectively with the “individual intifada,” which featured stabbing and other attacks by Arabs against Israelis, mostly in Yerushalayim, the fact that security forces have been able to quash most of the attempted attacks, with tremendous siyatta d’Shmaya, has not reduced the motivation of terrorists to carry them out.

“We are now coming into the Pesach season, and I have no doubt that terrorist groups, especially Hamas, will be seeking ways to take advantage of preparations for the chag to carry out attacks,” Argaman said. With large numbers gathering for shopping, family outings and other events that mark the holiday season, terrorists will be seeking opportunities wherever they can to carry out attacks, he added.

“Over the past years we have experienced a terror wave, a wave which commenced in October 2015 and continued to rise in severity until the first quarter of 2016,” Argaman told MKs at the meeting. “We instituted numerous changes and measures, including technological measures, to deal with this, and we have been able to halt this type of attack to a great extent. We have been able to stop more than 400 planned attacks using these methods.”

That doesn’t mean that terrorists won’t keep trying, Argaman said. “The quiet we are observing is deceptive. The terror infrastructure of Hamas, Islamic Jihad and other groups are planning and attempting to carry out attacks every day, and we must work day and night to halt them. Unfortunately, we are not always successful; over the past year, 16 Israelis and one foreign visitor died in terror attacks,” Argaman said.

The nature of terror is changing as well, Argaman said. “We are experiencing significant geostrategic changes that will continue over the long term,” including the strengthening of Iran and that regime’s progress towards the development of nuclear weapons. “This and other factors will have a profound effect on the Middle East,” he added.