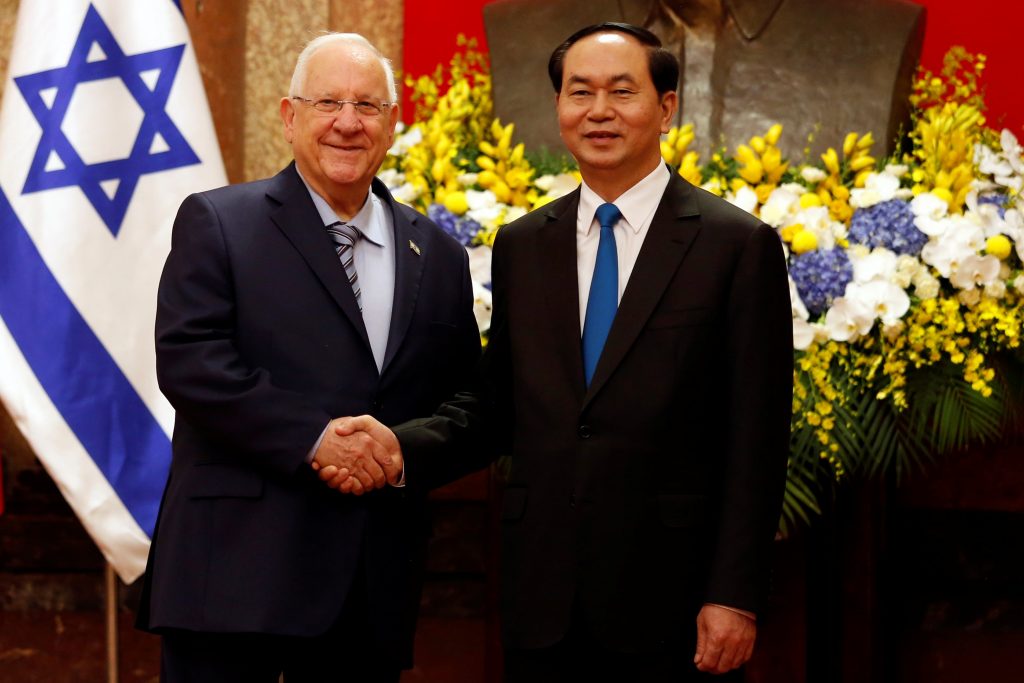 Over four decades after the communists ousted the U.S. from Vietnam, Israeli President Reuven Rivlin stood in the Presidential Palace in Hanoi and hailed the country’s entrance into the family of capitalist nations.

“We consider Vietnam as a leader in the global free-market, and we follow with admiration the stable economic growth in your country,” Mr. Rivlin said.

“We also agreed to work closely to make good use of the fact that both economies are mutually complementary with huge potentials. We also set the target of raising bilateral trade up to three billion USD in the coming years. We also pledged to encourage businesses, cities, and provinces in both countries to forge partnerships in a number of priority areas, such as hi-tech, agriculture, human resources development, water treatment, besides which we also have extensive exchange of cultural, education, training, and tourism cooperation.”

Regarding Mideast peacemaking, the Vietnamese leaders said, “Vietnam reaffirms its support for all regional and international efforts and efforts by the parties concerned in order to achieve comprehensive and just solutions to bring lasting solutions to bring peace to the people of Palestine, Israel, and others in the region, and to the establishment of an independent and sovereign state of Palestine coexisting alongside the State of Israel.”

Mr. Rivlin received an official welcome hosted by the President on Monday morning at the Presidential Palace. The two Presidents stood together for the national anthems, and reviewed a guard of honor.