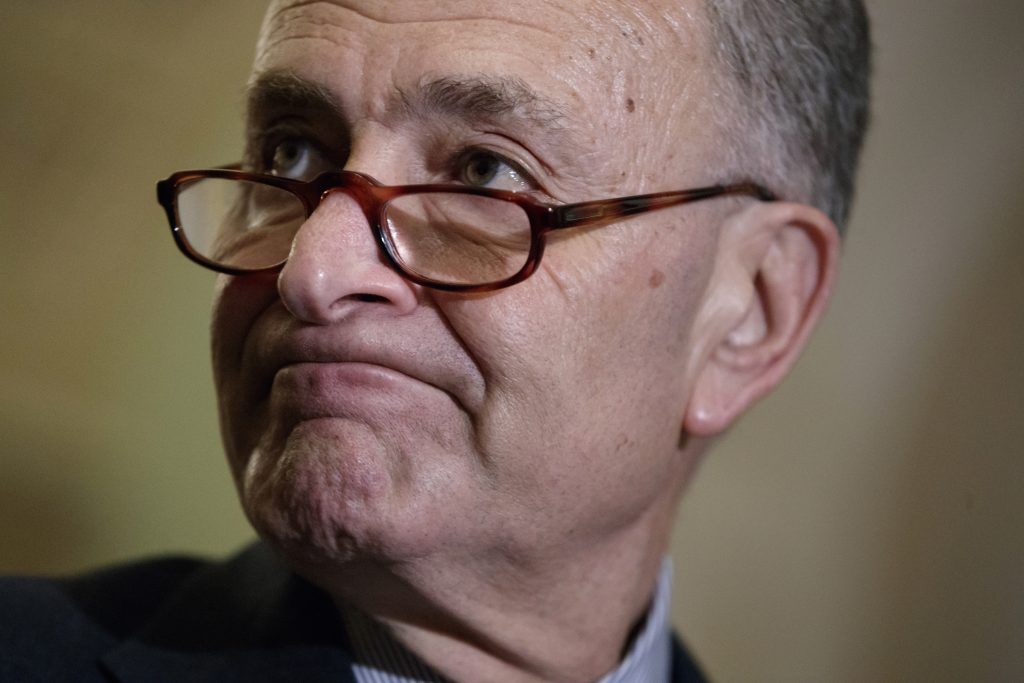 As a conservative, I’m thrilled by the arrival of unified Republican government. But the politician I’m most grateful to in Washington today is not President Donald Trump, House Speaker Paul D. Ryan, R-Wis., or Senate Majority Leader Mitch McConnell, R-Ky.

That’s because the Senate minority leader is doing more than anyone in our nation’s capital to ensure the passage of the most conservative health-care and tax reform possible — while working overtime to make sure that Democrats who voted for Trump in 2016 stay in the GOP fold in 2018 and beyond.

The biggest fear many conservatives had after the 2016 election was that Trump would be too quick to cut deals with the Democrats. Trump holds heterodox positions on everything from spending, foreign policy and entitlements to the minimum wage, trade and health care. If Democrats were smart, they would have reached across the aisle to Trump and offered to work with him. Trump is a dealmaker, not an ideologue. He would have loved nothing better than to cut deals with Schumer. Indeed, Trump reportedly called Schumer the morning after the election offering to do just that.

Instead of accepting Trump’s outstretched hand, Schumer’s Democrats are opposing virtually everything that Trump does. They are attempting to block not only his Cabinet nominees (Schumer even voted against Elaine Chao, wife of the majority leader and paragon of the GOP establishment, for transportation secretary) but also his sub-Cabinet appointments. And they have expressed zero interest in working with him on bipartisan legislation. The battle cry of the Democratic Party is “Resist!”

This unrelenting resistance has pushed Trump to the right. Since Trump knows he can’t get Democratic votes for his health and tax plans, he does not need to make any concessions to win over Democrats. Conservatives criticizing the Trump-Ryan health-care plan as “Obamacare lite” should take a moment to consider how much worse the legislation would be if Schumer had decided to sit down with Trump at the bargaining table.

Imagine what might have happened if Schumer had greeted Trump’s post-inaugural outreach by publicly declaring: “I know Donald Trump well. He was one of my biggest donors. We worked together for years. And I look more forward to working with him as president. We agree on a lot of things, and where we do agree I will be his strongest ally in Congress. Where we disagree, I will try to bring him over to our side, because Trump is nothing if not flexible. And where we can’t cut a deal, we will let the democratic process sort it out.” It would have been Schumer with Trump in the White House bowling alley, hammering out their differences on health care, instead of the members of the Freedom Caucus. Trump would have cut deal after deal with Schumer.

This would have been smart policy, and it would have been smart politics — allowing Schumer to sow divisions between Trump and the more conservative elements of the GOP caucus who would have bristled at his bipartisanship. But Democrats are in such a hysterical state right now that they are not interested in bipartisanship. They want to destroy Trump. As a result, Schumer is passing up golden opportunities to win policy victories and divide Republicans — all in an effort to placate his Trump-deranged, far-left base.

Conservatives should be thrilled by this. Schumer is not only pushing Trump to the right but also helping Republicans consolidate and grow their congressional majorities — by further alienating once-reliably Democratic blue-collar voters who abandoned the party in the last election. Last summer, Schumer dismissed these voters with the back of his hand, declaring that “For every blue-collar Democrat we lose in western Pennsylvania, we will pick up two, three moderate Republicans in the suburbs in Philadelphia, and you can repeat that in Ohio and Illinois and Wisconsin.”

It didn’t work out that way. While Democrats won Illinois, they lost Pennsylvania, Ohio, Wisconsin and even Michigan. The Washington Post reports that of the nearly 700 counties that twice voted for Obama, “a stunning one-third flipped to support Trump” in 2016. That means there are millions of Obama voters out there who were sick of Democrats such as Schumer dismissing their concerns and decided they wanted to give Trump a chance.

Now they see Democrats responding to their decision by digging in their heels and resisting and obstructing everything that Trump does — from staffing his administration to legislating on Capitol Hill.

The Democrats’ message to Middle America is: We don’t hear you.

There could be nothing better for the GOP — and nothing worse for the 10 Democratic senators who are up for reelection in 2018 in red states that voted for Trump. Republicans need to pick up only eight seats to win a filibuster-proof majority in the Senate, in which case they won’t need Democrats for anything.

Marc A. Thiessen is a fellow with the American Enterprise Institute and a former chief speechwriter to President George W. Bush.