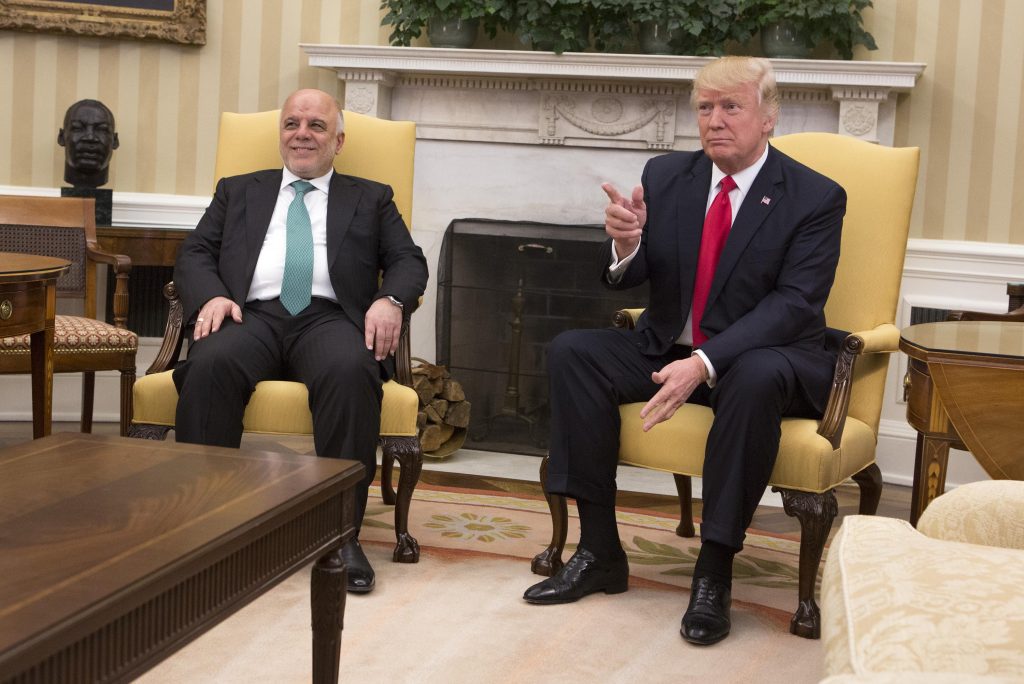 Iraqi Prime Minister Haider al-Abadi said Monday after a meeting at the White House that there are “better ways” for the United States to help beat back the Islamic State than sending combat troops.

Though Abadi praised the Trump administration as being willing to become more engaged in the fight against Islamist militants in Iraq and Syria, he warned that sending sizable numbers of troops would not defeat them. The United States has stepped up the deployment of ground troops to Syria, and elsewhere in the region, as the Iraqi army advances on Mosul and a complex array of forces prepare for an offensive on the Islamic State capital of Raqqa in Syria.

“We have to be careful,” Abadi said at the U.S. Institute of Peace, where he spoke shortly after talking with President Donald Trump, Secretary of State Rex Tillerson and other senior U.S. officials. “Committing troops is one thing. Fighting terrorism is another thing. You don’t defeat terrorism by fighting it militarily. There are better ways.”

Echoing themes that were common from State Department officials during the Obama administration, Abadi said governments and militaries succeed only if they win the trust and support of the civilian population through measures like anti-corruption reforms and good governance.

“We have to bring back trust in the way we govern,” he said. “It will be a sad day for all of us if people believe a dictatorship is better than democracy. Because if democracy doesn’t protect them, doesn’t provide for them, if there is corruption, … I think we failed.”

Abadi is among officials from 68 countries in Washington this week for a meeting of the U.S.-led “global coalition” to fight the jihadist group in Syria and Iraq. Abadi, who came to Washington seeking more financial aid and assistance in rebuilding ruined cities, said the White House has assured Iraq it will get more support than the Obama administration offered.

“We have been given assurances support will not only continue, but will accelerate until we complete the task,” he said after predicting the Iraqi army is in the “last stage” of pushing Islamic State militants out of Mosul, a city of more than 1 million people that is an Islamic State stronghold.

Just before meeting with Abadi in the Cabinet Room at the White House, Trump praised Iraqi soldiers for their advances in Mosul against the jihadists who are also known by the acronym of ISIS.

Abadi showed flashes of humor that seemed to poke gentle fun at Trump and his predicament.

While posing for photos in the Oval Office, a reporter’s question about Trump’s reaction to testimony in Congress undercutting his assertion that Trump Tower in New York was wiretapped on President Barack Obama’s orders prompted Abadi to grab Trump’s arm and reassure him jokingly, “We had nothing to do with the wiretap.”

And at the end of his moderated talk at the Institute of Peace, Abadi appeared to draw a parallel between Iraq’s sectarian divisions and the border between the United States and Mexico.

When he was asked if he supported a semi-autonomous region for minorities in northern Iraq, Abadi said he preferred a more inclusive society.

“I don’t think you protect yourself by having to partition yourself from your neighbors,” he said. “We have to build bridges with others, and work with others, to be more secure. Otherwise, you build walls.”

After a momentary pause in the audience of about 100 people, the room burst into laughter.