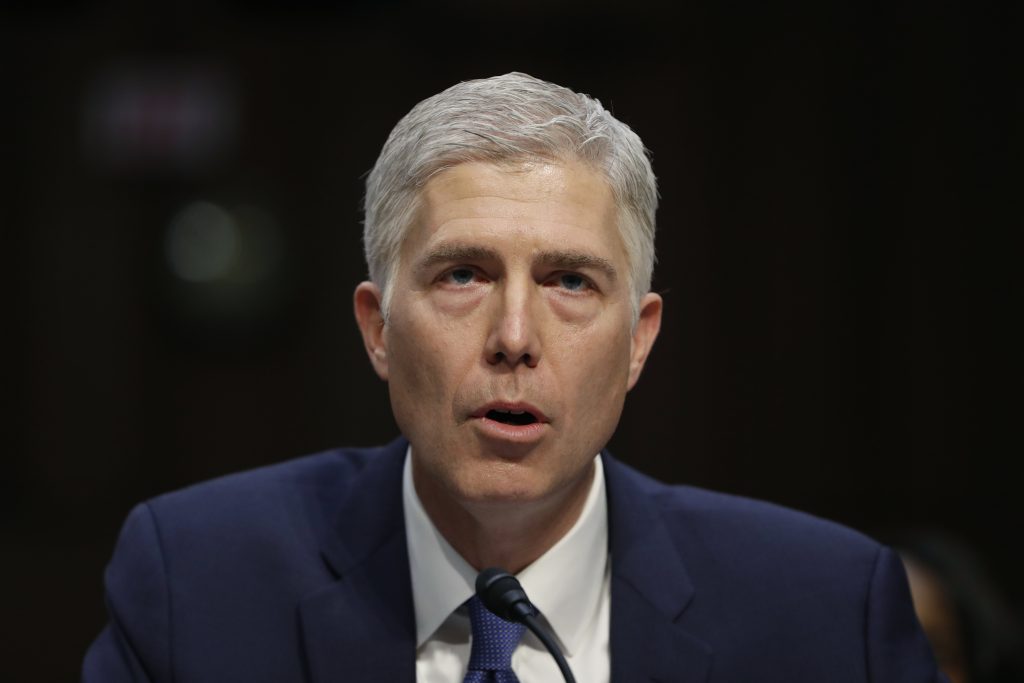 Judge Neil Gorsuch emphasized “the importance of an independent judiciary” on Monday in opening remarks to a Senate Judiciary Committee bitterly divided over his nomination to the Supreme Court.

“Under our Constitution, it is for this body, the people’s representatives, to make new laws. For the executive to ensure those laws are faithfully enforced. And for neutral and independent judges to apply the law in the people’s disputes,” said Gorsuch, President Donald Trump’s pick to fill the high court vacancy created 13 months ago by the death of Justice Antonin Scalia.

Gorsuch, 49, who serves on the Denver-based 10th U.S. Circuit Court of Appeals, is a respected, highly credentialed and conservative judge with a legal philosophy akin to Scalia’s, who has spent 10 years on the federal bench. Democrats claimed that he’s found in favor of corporations over “the little guy” during that time, while Republicans credit him with an intelligent and straightforward approach of interpreting the law as it is, not as anyone would wish it to be.

Since Scalia’s death, the court has split 4 to 4 on a handful of cases. Gorsuch’s confirmation would generally restore the court’s 5–4 conservative tilt, although Justice Anthony Kennedy, for whom Gorsuch clerked, has joined the liberals on some hot-button cases.

“These days we sometimes hear judges cynically described as politicians in robes, seeking to enforce their own politics rather than striving to apply the law impartially. If I thought that were true I’d hang up the robe. But I just don’t think that’s what a life in the law is about,” Gorsuch said.

Gorsuch delivered a very personal opening statement, speaking of his Western upbringing and his parents and grandparents, and choking up as he spoke about his wife and two daughters.

Gorsuch spoke to the Senate Judiciary Committee after hours of opening statements from senators revealed deep partisan divides between Democrats and Republicans on the panel. Democrats angrily condemned Republicans for refusing to act on Barack Obama’s nominee last year, while Republicans accused Democrats of trying to turn Gorsuch’s confirmation hearing into a referendum on the GOP president.

“So I hope this nomination hearing focuses on the one person before us,” Tillis said.

Democrats made clear that it wouldn’t.

Addressing Gorsuch, Sen. Dick Durbin repeated a comment by White House chief of staff Reince Priebus last month that Gorsuch “represents the type of judge that has the vision of Donald Trump.”

“I want to hear from you why Mr. Priebus would say that,” Durbin, D-Ill., said to Gorsuch. “Most Americans question whether we need a Supreme Court justice with the vision of Donald Trump.”

Democrats, under intense pressure from liberal base voters horrified by the Trump presidency, entered the hearings divided over how hard to fight Gorsuch’s nomination given that the mild-mannered jurist is no right-wing bomb thrower and is widely expected to win confirmation in the end, one way or another.

Seeming to acknowledge that the outcome was not in question, Durbin remarked to Gorsuch: “You’re going to have your hands full with this president. He’s going to keep you busy.”

In his opening statement, Committee Chairman Sen. Chuck Grassley alluded caustically to Democrats’ complaints about judicial independence in the Trump era. Gorsuch told several lawmakers privately that he was disheartened by Trump’s attacks on judges who ruled against him over his immigration ban, but that didn’t go far enough for Democrats.

“In recent months I’ve heard that ‘now more than ever’ we need a justice who is independent, and who respects the separation of powers,” the Iowa senator said. “Some of my colleagues seem to have rediscovered an appreciation for the need to confine each branch of government to its proper sphere.”

Several Democrats used their opening statements to emphasize the importance of judicial independence given Trump’s approach to the presidency.

“The president has gravely undermined it and that is why I believe you have a special responsibility here this week, which is to advocate and defend the independence of our judiciary against those kinds of attacks,” said Sen. Richard Blumenthal, D-Conn. “It isn’t enough to do it in the privacy of my office or our colleagues’ behind our closed doors. I really think our system requires and demands that you do it publicly and explicitly and directly.”

Several of the more liberal Senate Democrats have already announced plans to oppose Gorsuch and seek to block his nomination from coming to a final vote. But delay tactics by Democrats could lead McConnell to exercise procedural maneuvers of his own to eliminate the 60-vote filibuster threshold now in place for Supreme Court nominations, and with it any Democratic leverage to influence the next Supreme Court fight.

Republicans control the Senate 52–48. The filibuster rule when invoked requires 60 of the 100 votes to advance a bill or nomination, contrasted with the simple 51-vote majority that applies in most cases.