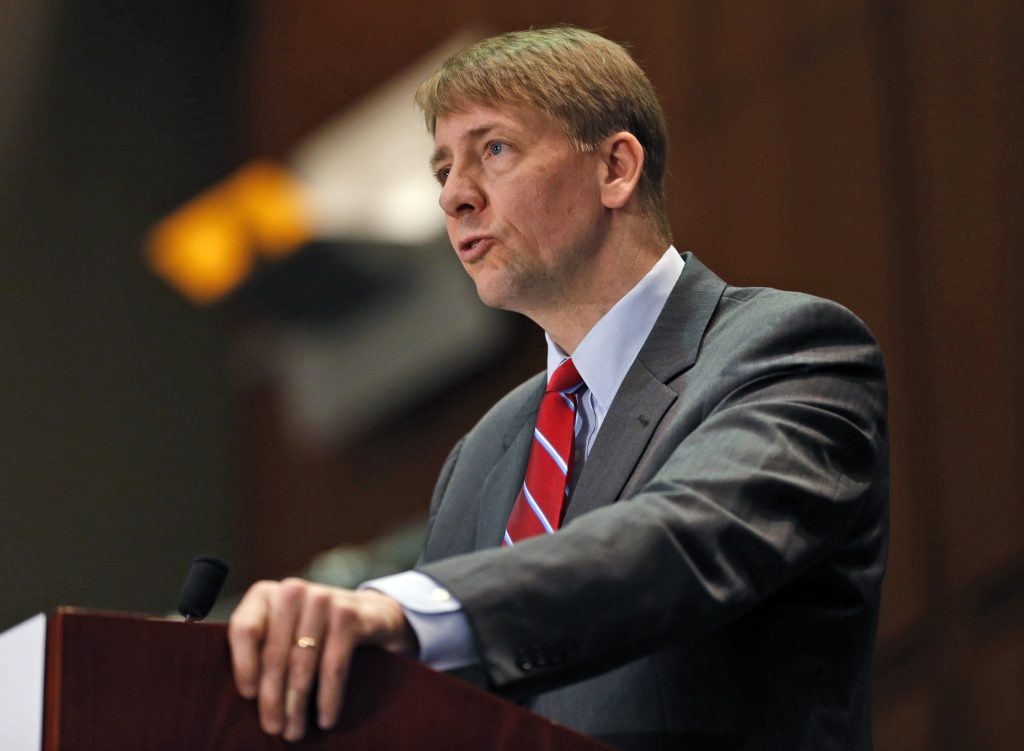 The Justice Department told a federal court on Friday that President Donald Trump should be able to fire the head of the Consumer Financial Protection Bureau, arguing the structure of the controversial independent watchdog is unconstitutional.

The brief, filed in a case in which a New Jersey mortgage company is challenging the bureau’s authority, is a reversal of the position taken by the Obama administration. It had strongly backed the agency, which was created by the 2010 Dodd-Frank financial reform law and was one of Obama’s signature accomplishments.

Conservatives have argued the bureau gives too much power to its director, who serves a five-year term and could be removed only “for cause,” such as neglect of duty.

Several lawmakers have called for Mr. Trump to fire CFPB Director Richard Cordray, a Democrat and former Ohio attorney general who was appointed by Obama.

Cordray, whose term doesn’t expire until July 2018, has been aggressive about enacting tough new rules and obtaining billions of dollars in refunds for consumers. The bureau was a key player in the $185 million settlement Wells Fargo & Co. agreed to pay last year for the creation of as many as two million accounts without customer authorization.

In a 33-page filing Friday, the Justice Department told the U.S. Court of Appeals for the District of Columbia that “there is a greater risk that an ‘independent’ agency headed by a single person will engage in extreme departures from the president’s executive policy.”

Because of that, the court should uphold a 2-1 ruling by a three-judge panel in October that found that structure violated the Constitution’s separation of powers because it limited the president’s authority.

The court said the solution was to strike down the law’s “for cause” provision, meaning the president could remove the consumer bureau director for any reason, as with other executive branch appointees.

The CFPB appealed the ruling to the full court. The case was brought by PHH Corp., a New Jersey mortgage services company.

Cordray has said he would not step down, and some legal scholars have said the ongoing case could present problems for Mr. Trump if he tried to remove Cordray. A bureau spokesman declined to comment on the Justice filing.

Mr. Trump vowed during the campaign to dismantle Dodd-Frank and has ordered Treasury Secretary Steven Mnuchin to review the law. White House Press Secretary Sean Spicer said last month that the bureau was “an unaccountable and unconstitutional new agency that does not adequately protect consumers.”

Rep. Jeb Hensarling, R-Texas, chairman of the House Financial Services Committee and a longtime critic of the bureau, said Friday that it was “arguably the most powerful and least accountable bureaucracy in American history.”

“I applaud the Department of Justice for recognizing this unconstitutional CFPB must not stand and must not continue to harm the very consumers it is supposed to protect,” he said.

Hensarling and other critics have complained that the bureau’s rules on mortgages, credit cards and other financial products restrict consumer’s access to credit. He has called for replacing the single director with a five-member bipartisan commission.

But Democrats and consumer advocates said a commission would make the bureau less effective. They’ve praised its work while noting that, under Dodd-Frank, the bureau’s regulations can be overturned by a majority of a panel of financial regulators.

“We’re not surprised the Justice Department has taken the position that powerful Wall Street interests wanted it to take,” said Ed Mierzwinski, consumer program director at the U.S. Public Interest Research Group. “But we will continue the defend the CFPB and believe that its structure is totally constitutional.”

The bureau does important work that would be jeopardized if Cordray were removed, Mierzwinski said.

Rep. Maxine Waters, D-Calif., and 37 other members of the Congressional Black Caucus wrote to Trump in January saying they “would strongly oppose” any attempt to remove Cordray and “would view such an action as an illegitimate abuse of power.”

“Director Cordray has done nothing to give the necessary cause for his removal from office,” the lawmakers wrote. “Communities of color and, indeed, all consumers in America will benefit from having director Cordray remain in his position and continue to independently implement the mandates imposed upon him by Congress as the director of the CFPB.”