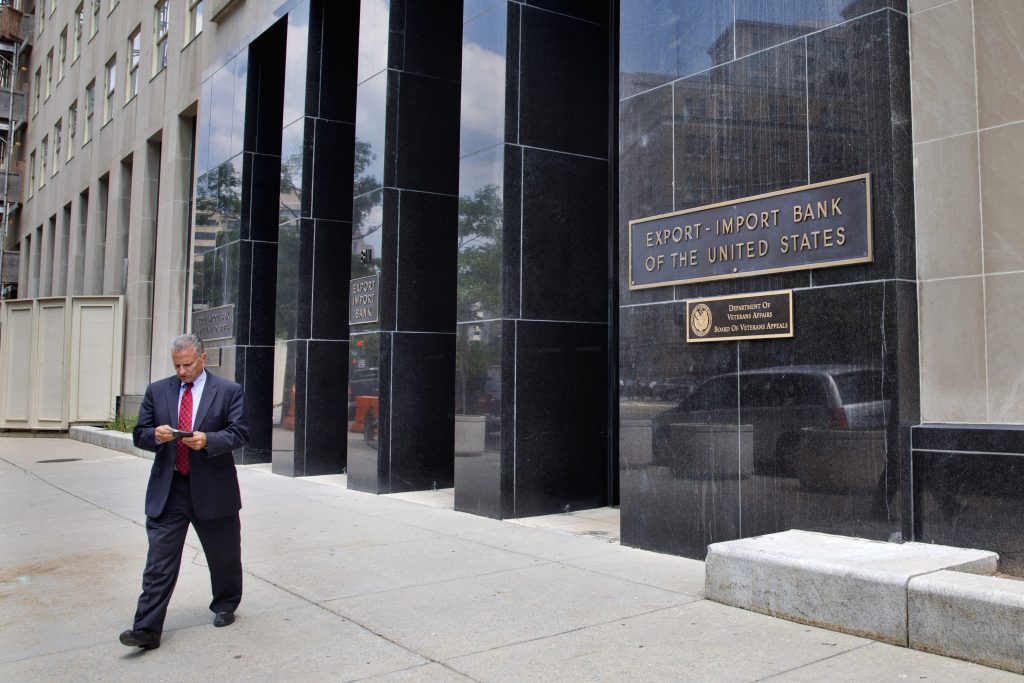 FirmGreen Inc., a Newport Beach, Calif., renewable energy company, is preparing to start construction on a solar project in the Philippines. The job could have yielded about $180 million in contracts to U.S. manufacturers to supply most of the equipment — but the work most likely will be done in China instead.

When FirmGreen was unable to get the necessary loan guarantees from the U.S. Export-Import Bank, it had to seek them from China’s version of the federal export-credit agency, Chief Executive Steve Wilburn said. And that financial assistance was available only if FirmGreen promises to manufacture the project’s equipment in China.

“I’m a patriot. I’m a former Marine, a 100 percent disabled Vietnam vet, and for me to have to go to China and other overseas sources for manufacturing goes against my grain,” Wilburn said. “But I have to survive as a businessman.”

Now exporters such as Wilburn, along with the U.S. Chamber of Commerce and other business groups, are urging President Trump to help fix the Ex-Im Bank — a move they said would boost the White House’s efforts to increase U.S. manufacturing jobs and reduce the nation’s trade deficit.

Two administration Cabinet secretaries have indicated they support the bank. But it’s unclear whether Mr. Trump will take action, adding to the uncertainty that has plagued the controversial agency in recent years.

The bank, opened during the Great Depression, helps U.S. companies sell their products overseas by providing loan guarantees to foreign buyers and other assistance for sales of goods manufactured domestically. It has strong support from Democrats and business-friendly Republicans.

About 85 other countries have similar export-credit agencies. Such aid is crucial for projects in developing nations, which often require government-backed financing and scare private banks because of fears of default.

But the Export-Import Bank has been hobbled for more than a year by board vacancies that prevent it from approving financial assistance to any project of more than $10 million. That means FirmGreen hasn’t been able to get financing for its Philippines project — and Wilburn said he can’t wait any longer.

In the 2016 fiscal year, the bank authorized just $5 billion in financing — a quarter of what it did in its last fully operational year in 2014 and the smallest amount in four decades.

The Trump administration has sent mixed messages about the bank, which many conservatives strongly dislike even though it costs the government no money and has generated a total profit of $3.8 billion for taxpayers since 2009.

Those opponents, including groups such as Heritage Action for America and the Club for Growth, say the bank’s assistance is corporate welfare that largely helps mega-companies such as Boeing Co. and General Electric Co. that don’t need the aid.

The bank’s default rate is well below 1 percent. But conservatives worry because taxpayers are on the hook for any losses the bank can’t cover on about $87.2 billion in outstanding assistance.

House Republican leaders blocked the bank’s reauthorization in 2015, leading to its closure for five months. After supporters pushed through legislation authorizing the bank to operate until Sept. 30, 2019, a key Senate Republican committee chairman blocked confirmation of President Obama’s nominees to fill vacancies on the board.

The five-person board has only two members, one short of the quorum needed to approve assistance for larger projects. As a result, the bank said, 40 such projects with a total value of $30 billion are waiting for approval.

During the presidential campaign, Mr. Trump said he didn’t think the bank was needed.

“It’s sort of a featherbedding for politicians and others, and a few companies,” he told the conservative National Review in 2015. “And when you think about free enterprise, it’s really not free enterprise. I’d be against it.”

And the bank reportedly is on a hit list of programs that the White House budget office wants to eliminate in the upcoming federal budget. White House budget director Mick Mulvaney voted against the bank’s 2015 authorization when he served as a Republican House member from South Carolina.

The bank is funded by interest and fees on its aid, and it sent $284 million in profit to the Treasury last year. Although the bank receives no appropriations, lawmakers each year set the amount it can spend to pay salaries and other overhead.

But recently, Mr. Trump has appeared to do an about-face, signaling support for the bank.

Sen. Heidi Heitkamp, D-N.D., a bank proponent, said Mr. Trump promised her after a Feb. 9 White House meeting that he would nominate a third board member.

“I specifically talked with the president about the need to get the Export-Import Bank up and running,” she said in a Senate speech a week later. “The great news is that President Trump agrees, and he informed me that we can in fact say he supports the Ex-Im Bank and that he would be nominating someone soon to serve on the Export-Import Bank.”

White House spokeswoman Natalie Strom said last week that she could provide no update on Mr. Trump’s plans for the bank.

The only action Mr. Trump has taken came last month, when he withdrew Obama’s January nomination of Democrat Claudia Slacik to fill one of the board’s vacancies. That could have indicated he doesn’t plan to fill the vacancies or simply that he wants to make his own nominations.