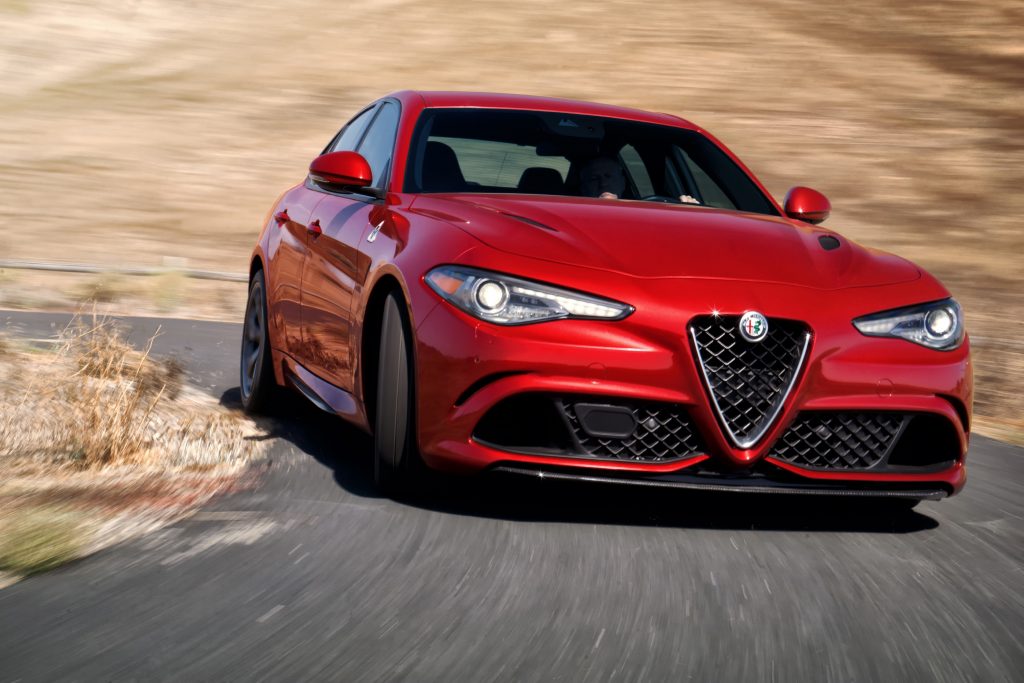 Has the world been waiting for a relatively affordable four-door track car with luxury-level comfort?

The latest assault on the American market by a company that hasn’t had much success getting our collective attention, it’s a bit of a wolf in sheep’s clothing.

The outside presents an anodyne sedan that — minus the company’s traditional triangular front grille piece or the four-leaf-clover badging that marks the Quadrifoglio version — could easily be mistaken for something from BMW, Audi, Mazda or Mitsubishi.

But the inside presents a very different picture. Built largely from carbon fiber, and outfitted with standard racing seats, the Giulia is a limber, lightweight rocket ship.

Under the hood is a 2.9-liter turbocharged V-6 engine that makes 505 horsepower and 443 pound-feet of torque, through a very tight eight-speed transmission.

Said to be based on a Ferrari engine, this V-6 will push the Giulia Quadrifoglio from zero to 60 in 3.8 seconds and up to 191 mph, Alfa boasts.

It’s pushing a machine that weighs 3,800 pounds — a bit burly for a two-door sports car, but not for a four-door sedan.

That’s partly because of all the carbon fiber, the lightweight material from which Alfa has crafted the Giulia’s roof, hood, rear spoiler and other key parts. Even the driveshaft is made of carbon fiber.

It’s a great combination. The acceleration is aggressive. The eight-speed transmission is snappy. The suspension is tight. The rear-wheel drive configuration feels a little old-fashioned and a little scary — like this is a Corvette’s crazy Italian cousin, come to visit and freak everyone out.

As befits a car with a base price of $73,595, the Giulia comes standard with heated front seats, heated steering wheel, aluminum pedals, leather dash and doors, keyless entry and start, and eight-way adjustable seats.

The Giulia comes factory-equipped with Pirelli tires and Brembo brakes. The model I drove had a carbon ceramic Brembo upgrade and carbon fiber race seats.

Very little about the interior says race car. The ride is quiet, even when the engine is working hard. Road noise is kept to a minimum by the combination of leather upholstery and a high-end Harmon Kardon sound system.

The back seats offer fair headroom and legroom, and are very comfortable. The trunk is spacious, partly because it doesn’t include a spare tire. You could stow your golf clubs or enough luggage for a week away back there.

Device plug-ins are hidden in the center console which, as a nod to the car’s racy personality, does not have proper cup holders. This is for serious driving.

Drive modes are normal, eco (but they call it Advanced Efficiency), dynamic and race. I found dynamic very dynamic, especially when I put the steering wheel-mounted paddle shifters to use.

Alfa says it’s the only sedan in the world fitted with an “active aero front splitter.” Built into the front fascia, this device activates at high speeds and applies extra downforce. I’m not sure I drove the Giulia fast enough to engage it, but the car didn’t feel to me as if it was struggling to maintain traction, no matter what I did with it.

Alfa representatives say potential buyers of the base model Giulia, which is powered by a smaller 2.0-liter engine and starts around $48,000, are cross-shopping the Audi A4, BMW M3, Cadillac ATS and Mercedes-Benz C-Class sedans.

For the racier, more expensive Quadrifoglio, they’re more likely to be considering the performance versions of those vehicles — the Cadillac ATS-V, say, or the Mercedes C63S.

It’s too soon to know how many of them are going Italian. The Quadrifoglio became available in the U.S. in December, and the regular Giulia a month later.

Highs: Fast on its feet, plush in its feel

Lows: Does this car have a customer?