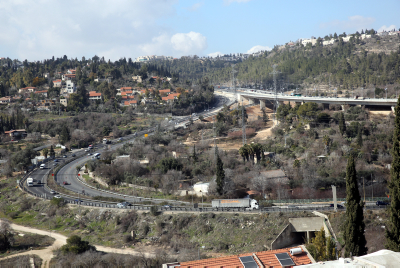 Many archaeological finds and ancient graves are discovered as modern Israelis turn over ground for the construction of roads, houses, and office buildings, but it’s not every day that an actual buried treasure is discovered. That, however, is what workers who are doing construction work on the Tel Aviv-Yerushalayim road discovered in recent days, the Archaeological Authority said Sunday.

The 1,400 year old treasure consists of bronze coins, used during the Byzantine era. At the time, the Land of Israel was still in the hands of the remnants of the Roman Empire, which was now seated in Byzantium (Constantinople, or today’s Istanbul). The coins are embedded with symbols of the Byzantine Empire, including images of several of the Byzantine-era Caesars, and religious symbols.

The coins were found buried below the remains of what apparently had been a prosperous household in the region – which included an olive and wine press, and a relatively large (for the era) home. The coins were found under one of the walls of the house – apparently stored there because the family felt it was in danger. Archaeological Authority officials said that the coins were likely hidden in the year 614 CE – the year that the Persian Empire invaded the Land of Israel, and seized it for several years. The family apparently tried to hide the treasure with the expectation that they would return – but they never did.

The road, which had been planned to go through the site, has been rerouted to ensure the integrity of the dig. The project is being paid for by Netivei Yisrael, the company that is responsible for upgrading and expanding Road One.